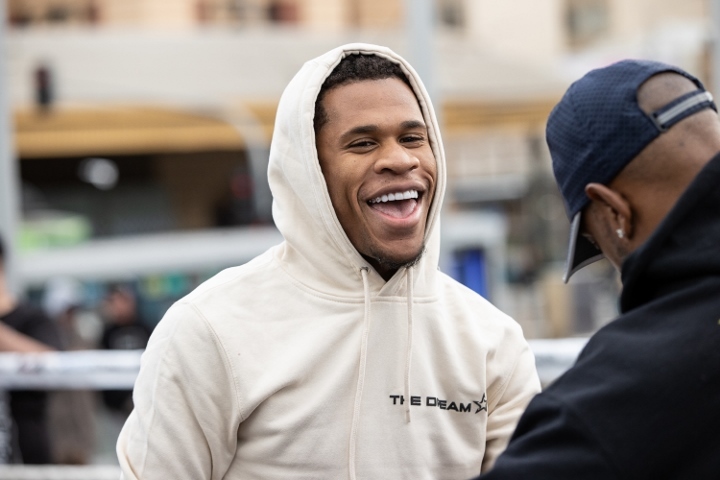 Devin Haney wants to make it abundantly clear that he and Gervonta “Tank” Davis are in a similar tax bracket.

The undisputed lightweight champion from Oakland, California, recently got into a social media row with Baltimore’s Davis regarding their wallets. One exchange saw Davis, a popular attraction, claim that he was getting paid “5x” more than Haney for his fights, suggesting in essence that his drawing power supersedes the significance of Haney’s belts.

“[Three Cry-laughing emojis] why they paying me 5x more than you like I have all the belts?” Davis tweeted. “But bum ass N—– and another thing stop trying to be me chump…the people starting to notice..”

In a recent interview, Haney took issue with Davis’ claim, saying the puncher was essentially lying.

Haney pointed out that, from a material standpoint, he has “everything” that Davis has.

“He hasn’t gotten nothing better than me. Everything he’s got, I got. Nobody believes that anyway. That was just a cop-out to deflect people from saying, ‘Why don’t you fight him?’ He wanted to run his money route.”

Indeed, Haney suggested that he does not even believe that Davis, who has fought strictly on the pay-per-view platform for the past couple of years, earns more than him.

“We all know the truth,” Haney said. “He’s not for sure making five times more than me. He’s not even making more than me.”

Haney is set to defend his four lightweight titles against George Kambosos in their rematch Oct. 15 (ESPN) at Rod Laver Arena in Melbourne, Australia. Haney defeated Kambosos by unanimous decision in their first meeting earlier this summer.

“My main focus is George Kambosos,” Haney said. “Once we’re victorious, we can talk about what’s next.”

Hitchins vs. Alamo, Ford vs. Lukas Added To Love-Spark Card
Jonas, Dicaire agree to Nov. 12 unification bout
Mayweather reportedly will face Deji in Nov. 13 exhibition
Lefebvre won’t defend title in Oct. due to injury
Tyson Fury Insists He Has Moved On From Joshua Fight, Will Face Charr Next