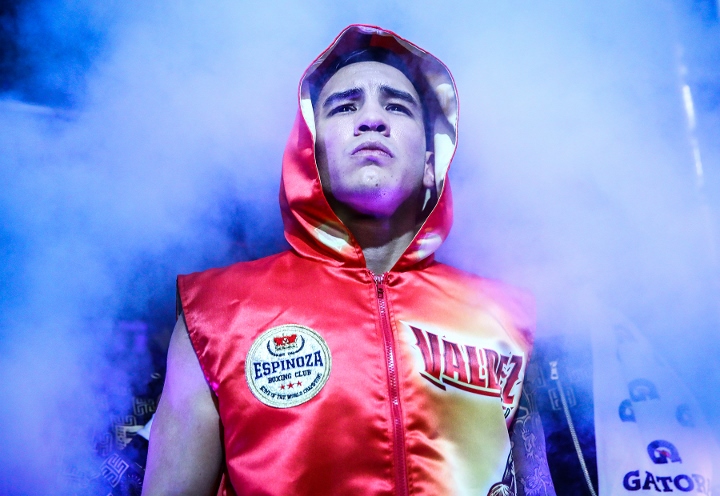 Oscar Valdez’s return from his first professional defeat has been delayed.

BoxingScene.com has learned that Valdez suffered an undisclosed, non-boxing injury that has prevented him from training recently. That injury has forced the postponement of his comeback bout to an undetermined date in January.

Valdez’s promoters at Top Rank Inc. had planned to have him headline a November 12 card at a venue to be determined in Las Vegas. The 31-year-old Valdez’s opponent hadn’t been chosen for a card that ESPN+ will still stream that night.

Seniesa Estrada (22-0, 9 KOs), the WBA women’s minimumweight champion, will make her Top Rank debut in the 10-round co-feature November 12. Her opponent hasn’t been announced.

The left-handed Stevenson (18-0, 9 KOs) became the first fighter to defeat Valdez since the Nogales native was eliminated at the 2012 Summer Olympics in London.

His lopsided loss to Stevenson extended a tumultuous time in Valdez’s career. The former WBO featherweight champion edged Robson Conceicao by unanimous decision in his previous bout, but Valdez tested positive for Phentermine, a substance banned by the Voluntary Anti-Doping Association, a month before he was scheduled to box Brazil’s Conceicao (17-1, 8 KOs) last September 10 in Tucson, Arizona.

The Pascua Yaqui Tribe Athletic Commission still licensed Valdez to defend his WBO junior lightweight title against Conceicao because the World Anti-Doping Agency, unlike VADA, permits the use of Phentermine both in and out of competition. Valdez’s predicament nevertheless caused controversy, particularly among contemporaries who questioned whether he knowingly used a banned substance while training.

Conceicao, meanwhile, will challenge Stevenson for his WBC and WBO belts in a main event ESPN will televise Friday night from Prudential Center in Newark (10 p.m. ET).