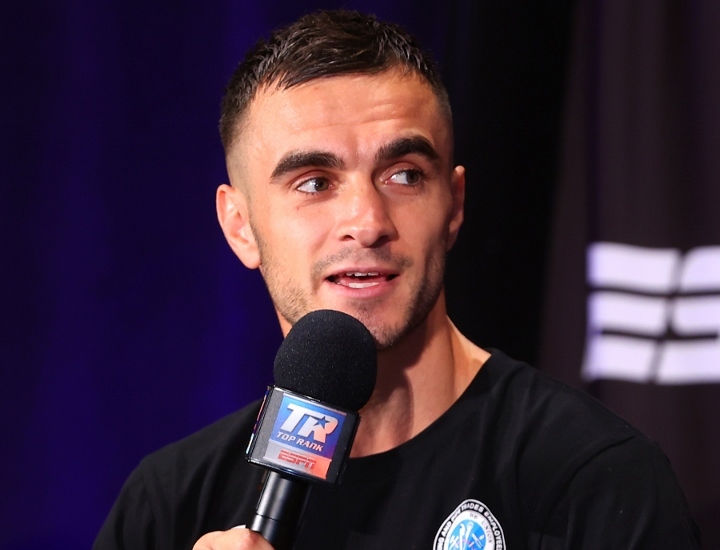 Andrew Moloney was never concerned about the rebuilding process.

A trilogy with Joshua Franco left Australia’s Moloney with his lone career blemishes, going 0-2 with one No-Decision in their unlikely three fight series which also saw the end of his secondary WBA junior bantamweight title reign. The 31-year-old contender quickly rebounded with three wins and is set for his fourth fight since his repeat defeat to Franco last August 14 in Tulsa, Oklahoma.

“It has been great,” Moloney acknowledges of the unexpected rate of activity. “I really feel this is when I’m at my best. Long gaps between fights doesn’t suit me and I’m so hungry to become world champion again so I want to fight as often as possible until I get there.

“I really want to thank my manager Tony Tolj and Top Rank for allowing me to do this and fight so often over the last 12 months.”

The bout serves as part of the undercard preceding the Devin Haney-George Kambosos Jr. undisputed lightweight championship rematch on October 16 (Saturday, October 15 for ESPN+ viewers in the U.S.) at Rod Laver Stadium in Melbourne, Australia. It comes four months after serving in similar capacity for the first Haney-Kambosos fight, where he scored a second-round stoppage of Alexander Espinoza on June 5 at Marvel Stadium in Melbourne, with twin brother and top bantamweight contender Jason Moloney appearing on both shows as well.

Oddly, Franco has yet to make his way back into the ring following their third fight.

Moloney was consistently this active prior to the pandemic, fighting no fewer than three times per calendar year. His three-fight set with Franco (18-1-2, 8KOs) was spread out over 14 months, though not wasting any time in getting back into the ring—and the win column. It all began with a heart-to-heart conversation within his team, at which point everyone was immediately on the same page as to how to proceed with his career.

“There were two things we spoke about,” revealed Moloney. “Firstly, Tony knew how angry I was at myself for losing that fight and knew how hungry I was to get back to fighting for world titles and to become champion again.

“Secondly, we agreed that I’m at my best when I’m fighting more regularly. Having big gaps between fights was not good for me so the plan was to get active again and climb the rankings back to the top as fast as possible.”