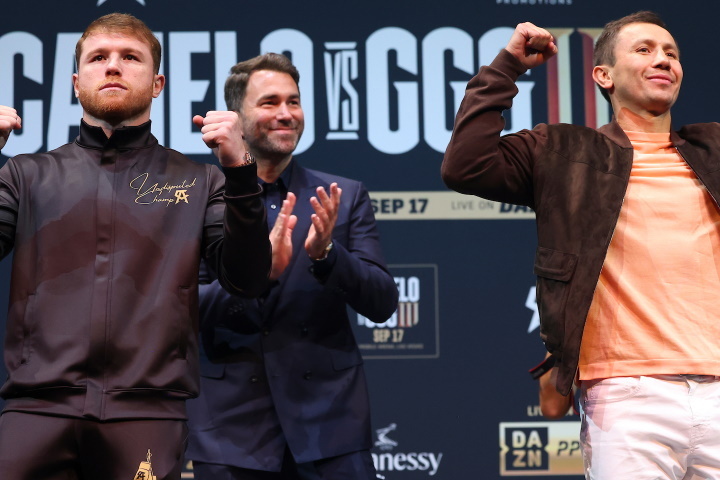 The sand in the hourglass of Gennadiy Golovkin’s career is inching toward completion.

The 40-year-old Kazakh knockout artist is preparing for a trilogy bout with Canelo Alvarez on Sept. 17 at the T-Mobile Arena in Las Vegas on DAZN pay-per-view.

What’s uncertain is how much more fight Golovkin (42-1-1, 37 KOs) will have in him moving forward.

Golovkin is cognizant that his fighting days are nearly over.

“I’ve matured. I’ve become wiser. A lot of things have changed in life and in boxing. During that time, I learned to look at boxing and other situations with open eyes. Not follow the stories that some people tried to tell me,” Golovkin told BoxingScene.com and other reporters.

“A lot of things have changed. We’ve all lived through the pandemic. The pandemic taught us how to wait. How to be patient. We even learned how to lose in life. Boxing stayed the same.”

The undisputed super middleweight champion Alvarez has quipped throughout the promotion of the third fight that he’s taken great pleasure in watching Golovkin age and fight inferior opponents – all while waiting for him to give Triple G another crack at him in an entirely new weight class.

“I have not thought about [if he waited for me to get old to fight for the third time]. If there were other reasons for him not to fight when we were supposed to have a fight, I think it’s best that you ask him,” said Golovkin.

Many are predicting now that Golovkin has aged – he got off to a slow start before knocking out Ryota Murata in April – that he’ll be more susceptible to a beating even though it can be argued that he won both fights against Alvarez.

Golovkin leaned on a devastating jab in both fights.

“My strategy stays the same. You have to box, and that strategy works. So nothing will change,” said Golovkin.

“I don’t think it’s the proper way to put it, to try to get a knockout. You’re always putting your best effort and 100% into the fight.”