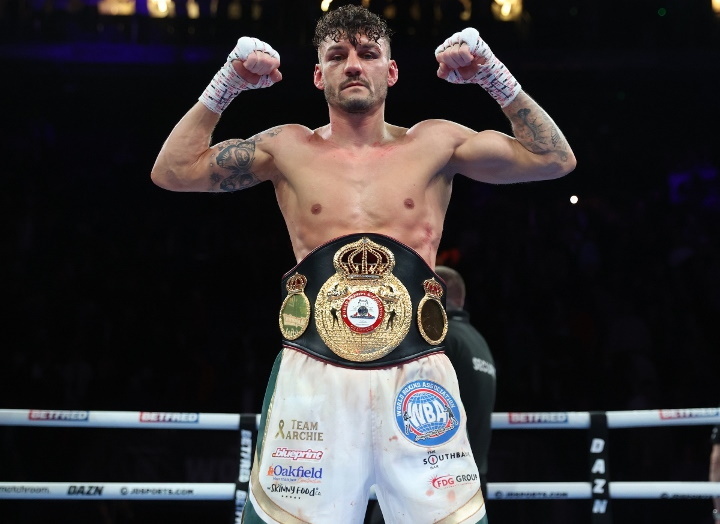 A torn biceps suffered in sparring has ruled Leigh Wood out of his WBA Featherweight World Title defense against Mexico’s Mauricio Lara at the Motorpoint Arena Nottingham on Saturday September 24.

The show will go ahead, with Rossington’s Maxi Hughes defending his IBO Lightweight World Title against Sheffield’s former IBF Featherweight World Champion Kid Galahad in a huge Yorkshire derby at the top of the bill, live worldwide on DAZN (excluding Australia and New Zealand).

‘Maximus’ (25-2-2, 5 KOs), who is undefeated since November 2019, landed the IBO crown with a shutout points win over dangerous Mexican Jovanni Straffon in September last year before making a successful first defense against Ryan Walsh in March.

Galahad (28-2, 17 KOs) will be looking to return to winning ways up at Lightweight after suffering a shock knockout loss to Spanish veteran Kiko Martinez in what was supposed to be a routine maiden defense of his IBF title at the Sheffield Arena in November 2021.

On a stacked undercard, Denaby Main’s Terri Harper (12-1-1, 6 KOs) leaps up in weight to challenge Scotland’s Hannah Rankin (12-5, 3 KOs) for her IBO and WBA Super-Welterweight World Titles in an intriguing England vs. Scotland clash.

Harper lost her WBC and IBO super featherweight championship titles at the hands of the USA’s Alycia Baumgardner on the undercard of Galahad vs. Martinez last year before landing the WBA Intercontinental Lightweight Title against Yamila Belen Abellaneda in March.

Rankin captured gold by decisioning Maria Lindberg over 10 rounds at the Tottenham Hotspur FC Banqueting Hall in November 2021 before defending her belts against Mexico’s Alejandra Ayala at The SSE Hydro, Glasgow in May.

“We’re gutted to lose such an explosive headliner in Leigh Wood vs. Mauricio Lara so close to fight week but unfortunately Leigh suffered a torn bicep during sparring and there’s no way he can get in the ring against such a dangerous opponent with only one arm,” said Matchroom Sport Chairman Eddie Hearn. “I’m pleased to confirm that our show at the Motorpoint Arena Nottingham on September 24 will go ahead with the IBO Lightweight World Title clash between Yorkshire rivals Maxi Hughes and Kid Galahad now topping the bill.

“There’s more World Title action on the undercard with Hannah Rankin defending her WBA and IBO Super-Welterweight belts against former Super-Featherweight World Champion Terri Harper. Both Hughes vs. Galahad and Rankin vs. Harper are worthy of headlining their own shows and we’ve got some of the best emerging talent featuring on the undercard such as Cyrus Pattinson and Junaid Bostan.”

Ticket refunds are available from the point of purchase until Tuesday September 20.

‘EUBANK JR VS BENN PPV HUMBLE PIE FOR DAZN’ – Johnny Nelson TELLS IT STRAIGHT
Luis Alberto Lopez Feels Warrington is Dirty Fighter, Aims To Knock Him Out
Real or Not: Fury will fight Usyk in 2023, Fundora a future world titleholder
The rebirth of one of boxing’s biggest rivalries: Benn vs. Eubank
“Usyk, let’s get it on!” – Joe Joyce calls out Oleksandr Usyk in his post fight interview! 👀