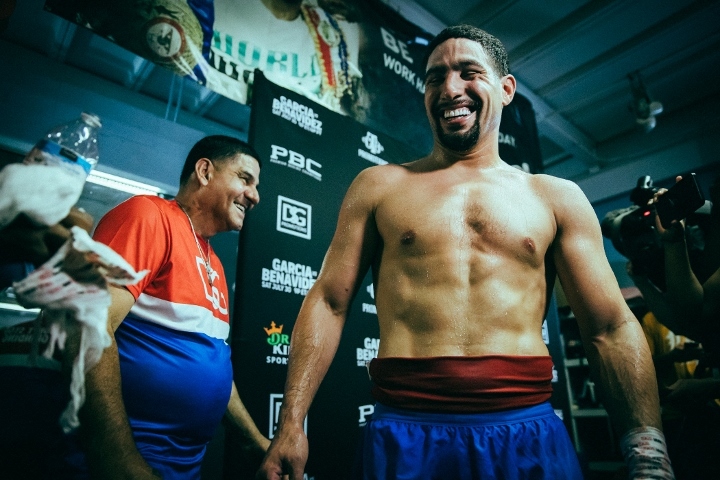 Danny Garcia has no plans on abandoning his closest confidante of his longtime fight career as he heads into a new division.

Garcia, the two division titleholder from Philadelphia, is gearing up for his debut at the 154-pound limit against Jose Benavidez Jr. on July 30 at the Barclays Center in Brooklyn.

A 15-year veteran, Garcia has won titles at 140 and 147 and is attempting to earn a third one at the new weight class.

Yet despite his success there have long been calls by some critics for Garcia to shake up his training team, which is essentially his father, Angel Garcia, who has courted controversy in the past for making coarse comments. At welterweight, Garcia has been unable to defeat the top welterweights, including Keith Thurman (in 2017) and Shawn Porter (in 2018). The 34-year-old Garcia’s last fight was a loss, in 2020, against unified welterweight champion Errol Spence Jr., who won by relatively clear unanimous decision.

Garcia responded to detractors of his father in a recent interview.

“Everyone’s always gonna say what they want to say, you know?” Garcia said on The Last Stand Podcast. “But when we were winning all the world titles, [and my father was getting] Trainer of Year [awards], and everything.”

Garcia believes calls for changing trainers are often knee-jerk reactions to unfavorable outcomes. Case in point, Garcia pointed to the recent example of Canelo Alvarez, who recently lost a decision to Dmitry Bivol in a light heavyweight title fight. Alvarez is trained by respected coach Eddy Reynoso, and few, as Garcia suggested, have been clamoring for Alvarez, the undisputed 168-pound champion, to fire his longtime teacher.

“As soon as you lose a fight people are like ‘Ah, you need a new trainer,’” Garcia said. “It’s just like Canelo. He lost his last fight – he has two losses, he has two draws – what’s the next thing they’re gonna say about him? He needs a new trainer too?”

Garcia said even if there are better, more learned trainers out there than his father, there is no replicating the level of trust and “chemistry” that he has with his father.

“Even if you do get a better trainer, if the chemistry isn’t there then you probably will have a worse result. I just feel like who you start with is who you finish with and you just build and learn together. In boxing you never stop learning.”