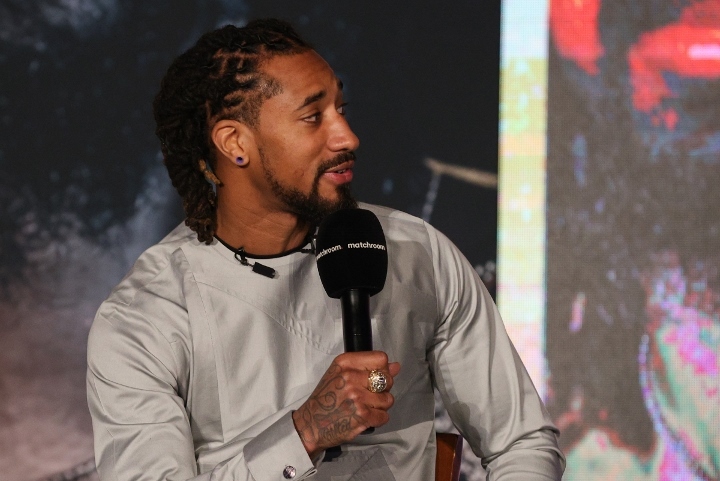 Demetrius Andrade’s luck at landing a big-name fight does not seem to have improved.

The two-division titlist from Rhode Island recently indicated in a video on his social media that he had reached out to British middleweight contender Chris Eubank Jr. about a fight that would pay him “over one million dollars”—but seemingly to no avail.

In the three-minute video, Andrade laid into Eubank for not accepting the offer, citing the fact that they are both “stars” and that they can feed their families with the purse money and fill up the O2 Arena in London.

Eubank currently has other plans, however. The son of the two-division champion and British boxing legend, Eubank is reportedly in the works to face rising welterweight Conor Benn in a catchweight bout at the O2 Arena on Oct. 8. The elder Eubank and Nigel Benn, the father of Conor, were sworn British rivals in the 1980s and 1990s.

It is not clear, moreover, who would be putting up the money for the bout Andrade proposed to Eubank. The skilled southpaw recently saw his long-term promotional relationship end with Eddie Hearn of Matchroom Boxing.

Andrade has not fought since his second-round demolition job of Jason Quigley last November. His scheduled fight against England’s Zach Parker, in May, what was supposed to be Andrade’s debut at 168 was cancelled after Andrade sustained a shoulder injury.

Recently, Andrade, who is still the WBO middleweight titlist, was ordered by the organization to defend his belt against Janibek Alimkhnauly of Kazakhstan.

It is not clear if Andrade’s proposal to Eubank was for a fight at 160 or 168. Andrade, nevertheless, feels a fight between the two would garner significant attention. Andrade cited his American and Cape Verdean fanbases—Andrade is of Cape Verdean descent— and Eubank’s British supporters as proof that their fight could become a great attraction at a large venue like the O2.

“But there’s a whole lot of money on the table for me, you, to fight for the WBO super—and when I say super I don’t mean super middleweight champion,” Andrade said. “Like, bro, we are stars. You’re a star, I’m a star—I’m a superstar. You’re a star. You got two losses. You’re gonna make a lot of money. Let’s put this fight together, bro. You’re talking about somebody (Benn) that’s not even relevant to the situation.

“We need all the fans, all the UK fans, all the American fans, all the Cape Verdean fans that are gonna pull up. Trust me. You got Luxembourg, you got Amsterdam. I got UK. I got Africa. They gon’ pull up to the O2 Arena.”