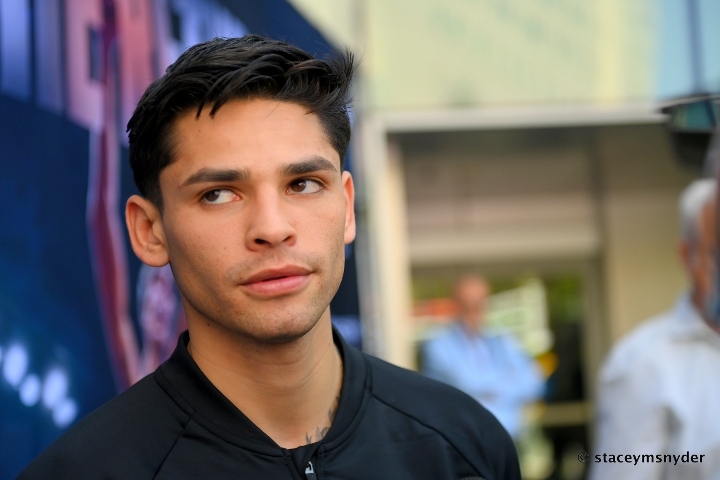 Ryan Garcia apparently has changed his mind about the lowest weight he can make for the only fight he seems to want.

Garcia relayed a message Friday to Floyd Mayweather through his social media accounts to inform Davis’ promoter that he is willing to face Davis at the lightweight limit of 135 pounds. The undefeated Garcia had repeatedly stated in the aftermath of his sixth-round knockout of Javier Fortuna on Saturday night that Davis would have to move up to the 140-pound division if Davis wanted to fight him next.

Mayweather made Garcia reassess his demand Wednesday, when the undefeated Hall-of-Famer stated during an interview with FightHype.com that Garcia would have to make “sacrifices,” most notably getting down to 135 pounds again, if he truly wants this lucrative pay-per-view showdown with Davis (https://www.boxingscene.com/mayweather-garcia-if-you-wanna-fight-tank-135-we-make-it-happen-end-year–167787).

In response to Mayweather’s statements, Garcia issued this statement Friday on Twitter: It’s any weight, any time, any place, there’s your answer Floyd, oh yeah, you can get it [too] if you want.

The 45-year-old Mayweather is retired from legitimate boxing and obviously is unlikely to take up Garcia, who is barely half his age, on Garcia’s challenge to fight. The legendary five-division champion has participated strictly in exhibitions since his 10th-round stoppage of UFC superstar Conor McGregor in August 2017 at T-Mobile Arena in Las Vegas.

Mayweather would, however, welcome a Davis-Garcia bout because it is the most marketable, profitable fight currently available for his promotional company’s franchise fighter. He pointed out during the aforementioned interview with FightHype.com that their side wouldn’t turn down this kind of money, but only if Davis is the “A” side of the event and it is contracted at a 135-pound weight limit.

Mayweather didn’t mention that Davis’ fights are distributed on pay-per-view by Showtime, whereas Garcia’s bouts are streamed by DAZN.

The 27-year-old Davis defeated Mario Barrios by 11th-round technical knockout in his only 140-pound bout, which took place in June 2021 at State Farm Arena in Atlanta. Davis (27-0, 25 KOs) has boxed at the lightweight maximum of 135 pounds in his last two fights – a 12-round, unanimous-decision win against Isaac Cruz on December 5 at Staples Center in Los Angeles and a sixth-round knockout of Rolando Romero on May 28 at Barclays Center in Brooklyn.

The 23-year-old Garcia’s last two fights have been contracted at the junior welterweight limit of 140 pounds. He went the 12-round distance with Emmanuel Tagoe, whom Garcia beat unanimously April 9 at Alamodome in San Antonio, and floored Fortuna three times en route to a sixth-round knockout Saturday night at Crypto.com Arena in Los Angeles.

Garcia last met the lightweight limit in January 2021, when he stopped Luke Campbell with a body shot in the seventh round of their fight for the WBC interim 135-pound championship at American Airlines Center in Dallas.