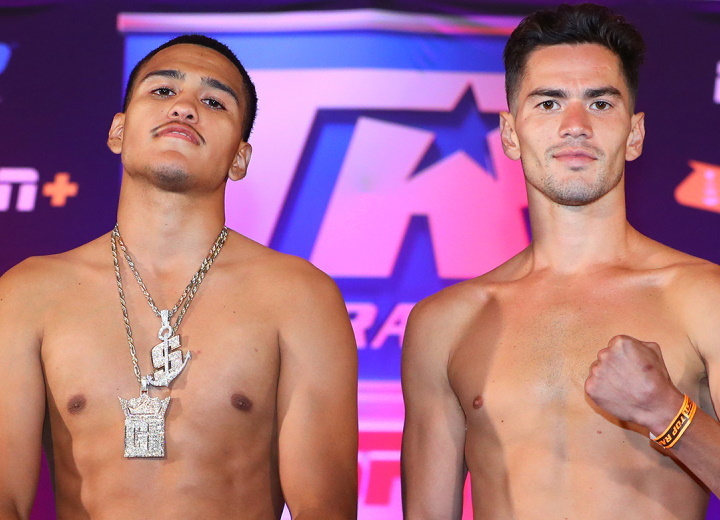 Gabriel Flores Jr.’s past two performances have made his debut as a full-fledged lightweight an immensely important fight for him.

Flores absorbed a beating during a one-sided, 10-round, unanimous-decision loss to Luis Alberto Lopez 10 months ago in Tucson, Arizona. The Stockton, California native barely beat Abraham Montoya in his following fight, another 10-rounder he won by majority decision March 4 in Fresno, California.

The 22-year-old Flores will face an undefeated fighter, Giovanni Cabrera, in his first fight at the lightweight limit Saturday night. Their 10-round bout will serve as the co-feature ESPN+ will stream before featherweight contenders Isaac Dogboe (23-2, 15 KOs) and Joet Gonzalez (25-2, 15 KOs) square off in the 12-round main event at Grand Casino Hinckley in Hinckley, Minnesota.

“I’m gonna make a statement, that’s for sure,” Flores said during a press conference Thursday. “My statement is to [say] that 135 is my weight class now. That’s what I’m going out to prove. You know, I didn’t join here to come and win a title. I came to take it all. That’s how I’m feeling. And so Saturday night, I’m gonna have to make an example of old boy.”

Chicago’s Cabrera (20-0, 7 KOs), who is trained by Freddie Roach, acknowledged during the press conference that this could be the most difficult fight of his six-year pro career. The 28-year-old Cabrera beat rugged Mexican Rene Tellez Giron (16-2, 10 KOs) by unanimous decision in an eight-rounder two fights ago, but the skillful Flores (21-1, 7 KOs) is motivated to prove he is much more suited to succeed as a lightweight than when he competed closer to the junior lightweight limit of 130 pounds.

Flores defeated Montoya on two scorecards four months ago (96-94, 96-94, 95-95). He knew, though, that it was time to move up to the lightweight division after winning that bout.

A refreshed Flores feels, too, that his experiences against Lopez (25-2, 14 KOs) and Montoya (20-3-1, 14 KOs) have helped him improve and will enable him to revitalize his career as a lightweight.

“It just taught me I could go through anything,” said Flores, who made his pro debut a few days after his 17th birthday. “You know, I’m gonna do anything to win. You know, when it comes to fire, I’ll run to the fire, just to get out of it and come [out] on top. I ain’t worried about that.”

WATCH: Eubank vs Benn – ‘Make The Days Count’
Ernesto Mercado Hopes To Reach Top Names at 135 Sooner Than Later
Luis Alberto Lopez Feels Warrington is Dirty Fighter, Aims To Knock Him Out
Deontay Wilder: I Hold Oleksandr Usyk To Be a Man of His Word
Arum Siding With Charlo In Possible Golovkin Showdown: “I Would Think Charlo Wins That Fight”