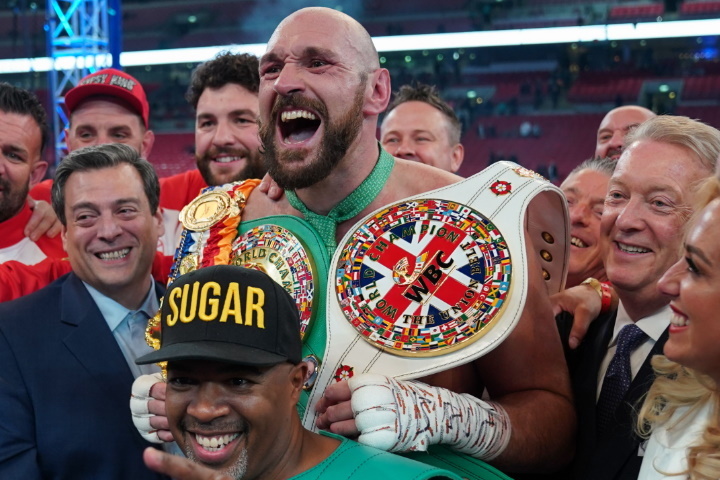 WBC heavyweight champion Tyson Fury is still on the fence with respect to a potential future fight.

Fury saw action in April, when he knocked out mandatory challenger Dillian Whyte at Wembley Stadium in London.

In the aftermath, Fury explained that he was going to retire from the sport.

However, Fury has yet to vacate his world title and he’s conducted several interviews where he’s hinted at the possibility of targeting the winner of next month’s rematch between Oleksandr Usyk and Anthony Joshua – who battle for the IBF, IBO, WBA, WBO heavyweight titles in Saudi Arabia.

Top Rank, who co-promote Fury, are not ruling out the scenario of a ring return.

“People have asked me that a lot. We’ve been told to stay down, Fury’s retired. He hasn’t said he’s coming out of retirement,” Top Rank president Todd DuBoef told Sky Sports.

“He hasn’t said anything, so what do you do? I think it kind of plays its way through. I think the result of the [Usyk-Joshua] fight is going to be a very significant piece of the whole heavyweight division. Public opinion is this is AJ’s last hurrah. He can’t afford to lose this one again. He can’t afford to. People are not going to be as forgiving, he may not be as forgiving on himself. Change of trainer, change of a lot of stuff. The style obviously bothered him in the last fight. This is going to answer a lot of questions.

“With Usyk we know he’s a terrific fighter, terrific, terrific story, obviously left Ukraine during these God awful times to get prepared for the fight. A world-class boxer, the question is can he really manage the heavyweight division or did he just get the right guy? So I think a lot of things have to be answered in the coming weeks.”

Duboef explains that his company is not going pressure Fury to return.