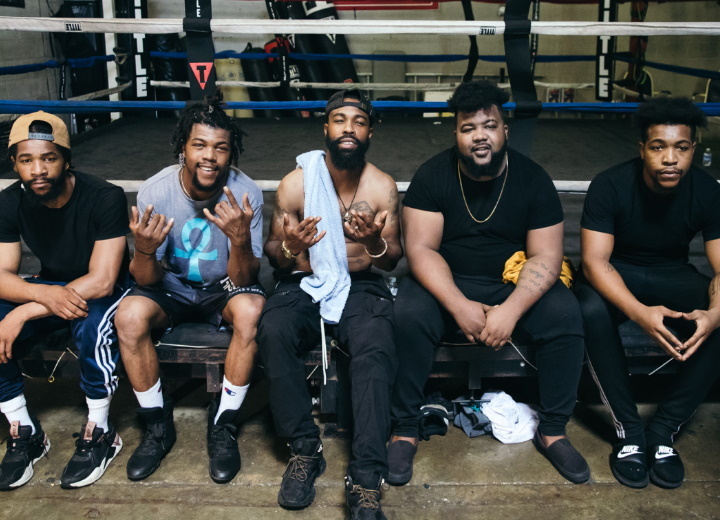 Tucked little more than a stoplight from a bustle of commercial activity in a major shopping area, there is a square space that could be confused for a warehouse or garage to a casual passer-by. It is something else altogether.

The Enigma Boxing Club in Capitol Heights, Maryland, is the fistic home of a former world champion and two more men who could one day earn the same honors. If they do, they will be the first U.S. trio of brothers to all hold major titles in boxing.

On the July 30th undercard for Danny Garcia-Jose Benavidez (Showtime, 9 PM EST), 26-year old 2016 US Olympian Gary Antuanne Russell (15-0, 15 KO) will make his second appearance of the year and, with a win, take his next step toward a title shot at Jr. welterweight. Russell will face 37-year old former Jr. lightweight and lightweight titlist Rances Barthelemy (29-1-1, 15 KO) in the evening’s co-feature.

Gary Antuanne was the focus on Monday when the gym hosted an open workout for the media but it was hard not to miss the broader family affair. It hasn’t been an easy couple of years for the family. Brother Gary Boosa died of a heart attack at just 25 years old in 2020. In May of this year, father Gary Russell Sr. passed away at 63 after years of battling health problems. In between, the family’s most famous son, 34-year old 2008 Olympian Gary Russell Jr. (31-2, 18 KO), lost the WBC featherweight title after a lengthy layoff, battling hard through an injured right arm but ultimately losing a decision in January to Mark Magsayo.

Despite tragedies outside the ring, and setbacks inside, the family business appears to remain thriving.

While boxing has had many successful families, and several brother duos around the world who have won major titles, there appears to date to be only one champion’s trio. Japan’s Kameda brothers (Koki, Daiki, and Tomoki) all snared gold in the 2000s with Koki and Daiki both winning primary titles in two weight classes below bantamweight.

Gary Antuanne and older brother Gary Antonio, a leading bantamweight contender, are both closing in on the opportunities that could add the Russell name to a very exclusive list.

Gary Antuanne, last seen handing former Jr. welterweight titlist Viktor Postol his first stoppage defeat, is focused right now on Barthelemy. He sounded ready for the Cuban veteran. “I think I’m coming up against a fighting style that’s similar to Viktor Postol’s. Postol…was more of a defensive, disciplined type of fighter. Barthelemy, he’s more of a hands down, Cuban style. But as far as being long, rangy, I think it’s going to be identical.”

Gary Antuanne is a boxer-puncher with an aggressive style that can catch the eye. He is aware of how his style can help against a fighter like Barthelemy who can sometimes be measured in his approach. Russell would like to get off to a fast start. “Sometimes, points is given due to the majority aggressor. Let’s say you got some fighters, they are the majority aggressor but they’re not really landing anything. I’ll give you an example. You got Floyd Mayweather and a Maidana. Floyd blocking and everything but if he’s blocking too much they give the round to Maidana because he was the majority aggressor…not him landing anything. But you have to keep in mind all these things accumulate points so a fast start would be a great thing for me with Barthelemy because all his fights, he tries to take his men into deep waters, control the pace of the fight, make it slow, crafty, and nine times out of ten the fight will go the full duration.”

Despite his Olympic background, Gary Antuanne hasn’t always attracted the same attention as a rising Jr. welterweight that has been the case for standout young lightweights just one division lower like Ryan Garcia, Devin Haney, and Teofimo Lopez. With Lopez and Garcia appear to be adding to an already rich field at Jr. welterweight led by recently undisputed, and still unified, lineal king Josh Taylor, Gary Antuanne was asked about how he feels about being a contender when the division is so deep.

“140 division is always loaded,” he replied. “The welterweight division was always loaded. It was a hiccup in the competition. The competition at 140, it became watered down, diluted to a degree and that’s due to the generation. I’m here to kind of keep that generational excellence going. I come from an older stock, a different kind of lineage. Our fighting style was more of a replication of the old fighting style; the old Tommy Hearns, Meldrick Taylor,” and, with an extra note of excitement detected in his voice, “Aaron Pryor and stuff like that. That’s who we come up on.”

With Josh Taylor having relinquished the WBC and WBA belts, Gary Antuanne has a path to a vacant title though he said to the assembled press his goal is to add to the swelling ranks of undisputed champions in the sport. He is currently ranked seventh by the WBC and eleventh by the WBA. Wins will move those numbers in his favor quickly. While others may have driven earlier headlines, Gary Antuanne knows a title would drive high profile opponents towards him. “That was inevitable,” he said of the possibility.

“It was something we saw years ahead in the game. Before we even got here. We know where our careers are going to go based off the blueprint we got.”

The blueprint, drawn out by their father, was on display as Gary Antuanne worked the mitts with corner lead Gary Allan while Gary Jr. looked on. Both brothers stepped into the ring to offer advice and guidance as they work together towards a goal. They weren’t the only one’s working.

29-year old Gary Antonio (19-0, 12 KO) was on hand to do strength and conditioning work with an eye toward his next fight as well. For now, all he could say was he could be fighting “as soon as August.” Based on what’s on the calendar, that could mean a slot on the August 20th Adrien Broner-Omar Figueroa card.

Gary Antonio is currently ranked second by the WBA, fourth by the IBF, and ninth by the WBC. All three of those belts belong to the same man, pound-for-pound Japanese sensation Naoya Inoue. Gary Antonio made clear he would like the opportunity to hand Inoue his first defeat and stated it’s a fight he wants. Whether Inoue remains at bantamweight long enough to see that fruition remains to be seen.

Gary Antonio expressed some frustration, talking about how during a string of awkward finishes that included a disqualification win, a technical decision win, and a no decision against former titlist Emanuel Rodriguez, he wasn’t sure things would bounce his way. He knows now he’s getting closer to an opportunity.

While all three brothers may eventually hold titles, they may not have the chance to all hold them simultaneously. While he wasn’t working with Gary Antuanne, Gary Jr. was working on his own rehabilitation and showing off the multiple scars from shoulder surgery after the Magsayo fight.

Gary Jr. was open about the recovery process. “I’ve been doing some aggressive physical therapy. Three months out from the surgery. It’s good so far.” Good didn’t necessarily mean he’s planning a return to the ring. “I’m not even focusing on getting back in the ring. I’m not even thinking about it all. To be honest with you, I don’t know if my shoulder is…as of not, it feels good but it’s still a little tender…I can do things with it, more than what I could at first but I’m not sure if it’s going to be back to where I want it to be to compete on the level I want to.”

If he doesn’t make it back to the ring, Gary Jr. noted he’ll be working with his brothers and “always be involved with the sport. It’s what I do but it’s also what I love.”

Gary Antuanne reflected similarly on what the accomplishment could mean for the fighting family Gary Russell Sr. built. “I’m pretty sure he’d be turning his his grave from happiness. It was something he was striving for anyways. Something we were striving for. If we were to pull it off, it’d just be an inevitable thing, something I could tell myself I knew it was gonna’ happen sooner or later. My father, he instilled a lot of good things in us, a lot of great things in us. Everything he instilled into us was things dealing with staying driven, staying determined, and being superior. And that didn’t just register as far as the boxing profession.”

Whether the brothers complete the trifecta over time or night, what they showed together this week is that their father left them a legacy more important than boxing.

He left them each other.

The rebirth of one of boxing’s biggest rivalries: Benn vs. Eubank
Figueroa arrested on DWI suspicion in Texas
Joyce Wants Usyk Next, Also Calls Out Fury, Joshua, Wilder, and Whyte
“This Is How Brain Injuries Occur.” Chris Eubank Sr Wants His Son’s Weekend Fight With Conor Benn Boycotted
In less than three weeks the Nordic Nightmare Robert Helenius sets sail for Brooklyn to fight Wilder