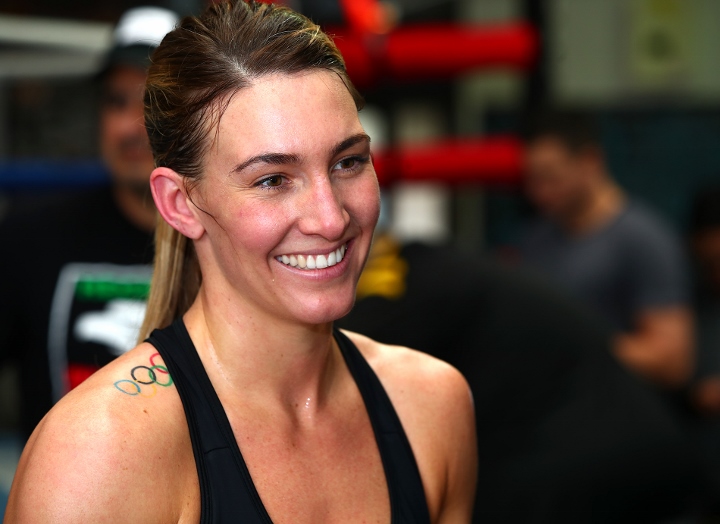 Mikaela Mayer has always been confident about her promoter’s confidence in her value.

That is why the 32-year-old Southern California native and current unified (WBO, IBF) 130-pound titlist is not surprised that the biggest fight of her career will take place on a Top Rank-promoted, ESPN-broadcasted card (Sky in the United Kingdom).

Mayer takes on WBC titlist Alycia Baumgardner of Michigan in a women’s 130-pound title unification fight Sept. 9 at the O2 Arena in London. The fight will be the co-feature to the main event bout, an undisputed middleweight title fight between Claressa Shields and Savannah Marshall.

While Mayer is backed by Top Rank, Baumgardner is promoted by Eddie Hearn’s Matchroom Boxing, which has a broadcasting partnership with DAZN, the streaming platform. Top Rank has promoted Mayer for her entire career, while Matchroom signed Baumgardner after she upset Terri Harper last year to win the WBC 130-pound belt.

In a recent interview, Mayer indicated that Matchroom and DAZN tried to retain rights to stage the fight but that Top Rank was able to offer compensation high enough to quell their advance.

“They (Top Rank) offered her (Baumgardner) the money that she couldn’t refuse,” Mayer said on The DAZN Boxing Show. “Did Eddie and Matchroom try to get it on DAZN. Sure they did. But Top Rank said ‘hell, no’!

“They said we put five years into Mikaela. You just had Alycia two fights ago. There’s absolutely no way we’re giving you this fight. And you know what are they going to argue? So, they offered her the money and they made it happen.”

“Money talks,” Mayer added. “Big props to Top Rank. They stepped up. They put four, five years into me now and I’ve passed every test that they have put in front of me. They owed me this fight and it came together and they made it happen.”