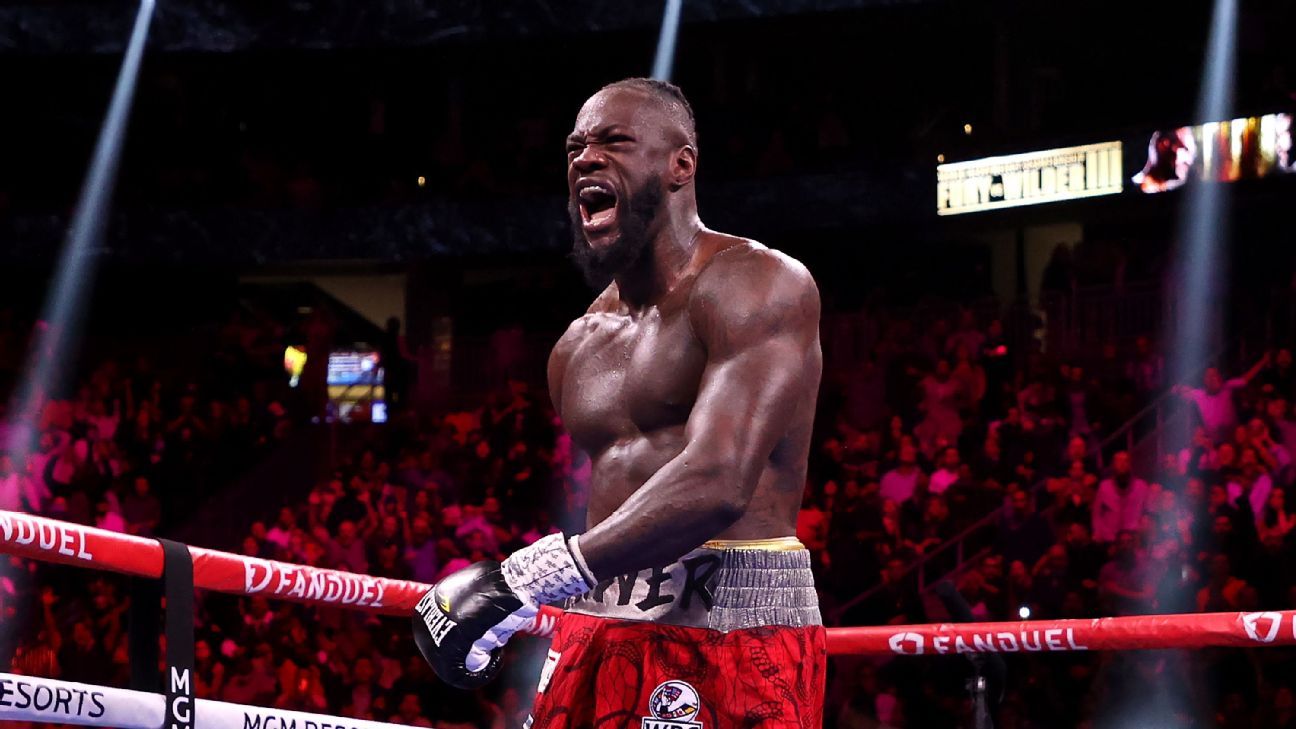 Several big-name boxers who suffered high-profile losses last year will compete for the first time in the second part of 2022. Others, like Danny Garcia, didn’t compete in 2021. Adrien Broner isn’t coming off a loss, but he is on the heels of a controversial victory over an unheralded opponent.

For many on this list, it won’t be enough to simply earn the victory — they’ll need to look good doing it if they want to reclaim their former glory.

Who’s primed to return to stardom and who’s destined to remain on the outside looking in? Let’s take a look at boxing’s bounce-back candidates for the second half of the year:

At 34, Garcia will embark on a quest to win a world title in a third different division.

Garcia, of Philadelphia, meets Benavidez in a junior middleweight fight, the main event of a PBC on Showtime card at Barclays Center in New York. Garcia has never competed above the welterweight division and hasn’t entered the ring since a lopsided defeat to Errol Spence Jr. in December 2020.

Top Rank Boxing is now on ESPN and ESPN+. Subscribe to ESPN+ to get exclusive boxing events, weigh-ins and more.

Benavidez is a logical comeback opponent for Garcia and the fight should give us a solid idea of Garcia’s readiness to compete with more prominent fighters. Benavidez, too, hasn’t been active. His lone fight since his 2018 loss to Terence Crawford came in November and ended in a controversial draw against journeyman Francisco Torres.

Benavidez isn’t an established 154-pounder, but he has the frame to be a contender at junior middleweight. On the other hand, Garcia is a natural 140-pounder who doesn’t receive enough credit for his championship run at junior welterweight.

But those landmark 140-pound wins over Amir Khan and Lucas Matthysse came in 2012 and 2013, respectively. And while he has victories over Paulie Malignaggi, Robert Guerrero and Brandon Rios at 147 pounds, his campaign in the division was highlighted by close decision losses to Keith Thurman and Shawn Porter, along with the Spence fight in which he wasn’t competitive.

Jermell Charlo, who currently holds all four 154-pound titles, is a fighter Garcia would be a long-odds underdog to defeat. Of course, it’s always possible Charlo moves up to 160 pounds after his Jan. 28 fight with Tim Tszyu or even vacates one of the belts.

Before Garcia can even think about Charlo, he’ll need to show he’s still an elite counterpuncher with impeccable timing after a 19-month layoff and in a brand-new weight class.

Tim Bradley explains why he expects Teofimo Lopez to win by knockout in his next bout against Pedro Campa.

In ESPN’s 2021 upset of the year, Lopez was dropped and defeated by George Kambosos Jr. for the undisputed lightweight championship. That loss came after Lopez delivered a career-best performance with a win over Vasiliy Lomachenko the prior year, a victory that established Lopez as one of the best boxers in the world.

Now, the 24-year-old is looking to return to the pound-for-pound list, fighting in the main event of a Top Rank Boxing on ESPN card in Las Vegas. However, he won’t be able to prove much in his comeback fight. That’s because he’s fighting Campa, a journeyman who won’t provide much resistance. After all Lopez has been through, he needs a confidence-building fight at this juncture.

He fought Kambosos with a tear in his esophagus, but since then Lopez has received a clean bill of health. Like Garcia, he’s now campaigning at a new weight. At 140 pounds, Lopez will surely aim for a fight with champion Josh Taylor, who first could rematch Jack Catterall.

Jose Ramirez and Jose Zepeda are slated to fight for one of the titles vacated by Taylor, making them two more viable opponents for Lopez in the future.

In the meantime, Lopez must deliver another crushing knockout when he meets Campa and remind everyone — and himself — just how good he is.

Anthony Joshua can’t deny that a potential fight with Tyson Fury gives him extra motivation to win his rematch with Oleksandr Usyk.

AJ finds himself in familiar territory as he approaches his rematch with Oleksandr Usyk in Saudi Arabia. After all, the Kingdom of Saudi Arabia was the site of Joshua’s encore counter with Andy Ruiz Jr. in 2019. Joshua was coming off a shocking seventh-round TKO loss to Ruiz six months earlier and rebounded to recapture his three heavyweight titles in dominant fashion.

In Usyk, Joshua faces a far more formidable task. Unlike Ruiz, Usyk never enters the ring unfit, and even with war raging in his home country of Ukraine, the 35-year-old seems to be focused on the fight.

Usyk is a masterful boxer who appeared on the verge of stopping Joshua in the final round of their first fight in September. What can Joshua do to drastically turn the tables one year later?

Joshua has linked up with trainer Robert Garcia after parting ways with Robert McCracken. Garcia is highly respected, but a boxer usually takes three camps to adjust to a new coach. Joshua is still in his prime at 32, but Usyk appears to be a better boxer with the wrong style for Joshua as an opponent.

Still, it would be foolhardy to count Joshua out. He’s one of the most dangerous punchers in the sport and was able to deliver some powerful blows against Usyk. The Englishman also proved his resilience in the rematch against Ruiz and quieted all the doubters.

After the performance Usyk delivered in the first fight, if Joshua wants to become a three-time heavyweight champion, he’ll have to provide a legacy-defining win that hall of fame résumés are built on.

“The Problem” is on the comeback trail — again.

Hours after Joshua and Usyk enter the ring, Broner will return for a junior welterweight fight with Figueroa in Hollywood, Florida. There’s plenty of skepticism surrounding Broner’s ability to make 140 pounds coupled with his history of contract changes to the weight limit, so we’ll see if this fight sticks at junior welterweight.

No matter what weight Broner competes at, he needs a convincing win, perhaps more than any other boxer on this list. You’d have to go back to 2013 to find a notable win for Broner, and even that victory over Paulie Malignaggi was far from clear. Broner was a force at 130 and 135 pounds, but he hasn’t been able to recapture the magic at 140 or 147.

Still, Broner is one of the most recognizable names in boxing and is just 32. His disputed win over the little-known Jovanie Santiago in February 2021 was his first victory in four fights, and his last clear win was a ninth-round stoppage of Ashley Theophane in 2016.

If Broner can score the victory over Figueroa, another inactive fighter, he could find himself in another big bout in 2023.

The last time Wilder was in the ring, he received unimaginable punishment at the hands of Tyson Fury in ESPN’s 2021 fight of the year.

Since that October 2021 defeat in a classic heavyweight title fight, Wilder has been noncommittal about continuing his career. Still, sources told ESPN that all indications point to a comeback fight this fall. The front-runner to face Wilder is Robert Helenius, who’s coming off a pair of TKO wins over Adam Kownacki. Whomever “The Bronze Bomber” fights, assuming he does indeed return this year, it will be must-watch TV.

Wilder is the sport’s biggest puncher, and he also proved in the third fight with Fury that he possesses an unbreakable will. More so, even in defeat, the 36-year-old showed improved technique in his first fight under the tutelage of Malik Scott.

Wilder, of Alabama, floored Fury twice in the fight after being routed in the second meeting and is still ranked No. 3 by ESPN at heavyweight.

Fights with Ruiz (if he beats Luis Ortiz on Sept. 4) or Joshua (win or lose vs. Usyk) are among the best matchups in all of boxing.