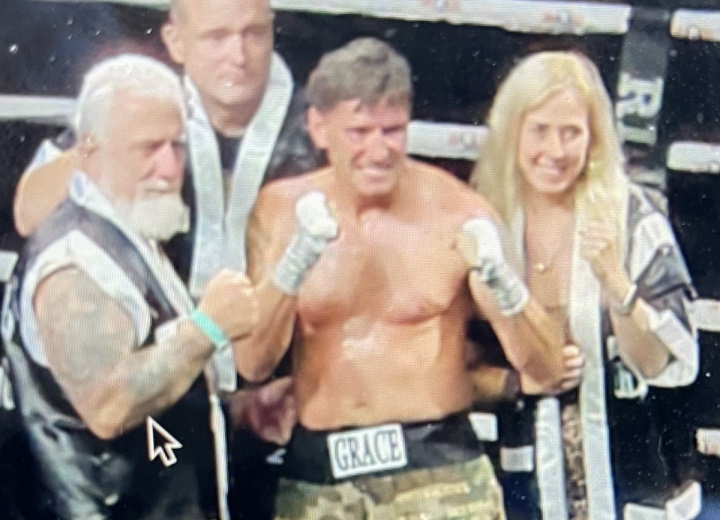 Iannuzzi also became the oldest boxer to win his debut, with an impressive first round knockout of Lucinei Santos (0-4).

Iannuzzi, 1-0 (1ko), who is a former Masters Amateur World Champion, came in at 154 lbs and dominated Santos despite his opponent’s 18-year age advantage.

At the opening bell, Santos appeared set on ending Iannuzzi’s career about two seconds in after he began with a big left hook, but Iannuzzi was able to make him miss and immediately stuck Santos with a hard jab.

”As soon as I saw how wide he punched, I knew head movement would be important,” said Iannuzzi. “We threw bombs in there, it was fun.”

Iannuzzi remained calm, worked behind his jab and seemed comfortable in the pocket. Showing good skills, he tried to bait Santos with a hook off of his jab midway through the round.

“I give him credit, the kid didn’t hold back, he tried to take my head off,” admitted Iannuzzi. “At the end of the day, I knew my skills would carry me through, I’m still pretty sharp.”

Santos was game throughout, throwing wide haymaker type punches with bad intentions. Late in the round, Iannuzzi landed his hardest shot, a left hook that hurt Santos. He followed it with a right hand that had Santos in more trouble. Iannuzzi came forward and would end the fight with a looping right hand that landed flush, dropping Santos to his knees.

“The left hook I hit him with is what really hurt him,” said Iannuzzi. “After the first right hand he almost turned his back but I was able to hit him with another and that was it.”

Santos was unable to beat the count allowing Iannuzzi to make further history at 2:55 of the opening stanza.

Prior to the fight, Iannuzzi, who had a large contingent at the venue to support him, was adamant that this would be his only professional fight. Could he be lured into a second after such a successful debut?

“Nope, one and done for me,” said Iannuzzi with a chuckle. “My wife absolutely won’t let me fight again.”

The Beltline: How should we treat fights involving boxers who have failed a drug test?
Whyte wants Joshua rematch if Fury bout off
Jake Paul Eager For ‘Real Fight’ With Mayweather: ‘I Want to Say I Got Your 0’
Shakur Stevenson-Robson Conceicao: LIVE RESULTS From Prudential Center
Usyk on Joshua Outburst: ‘He Reminded Me of a Little Boy’