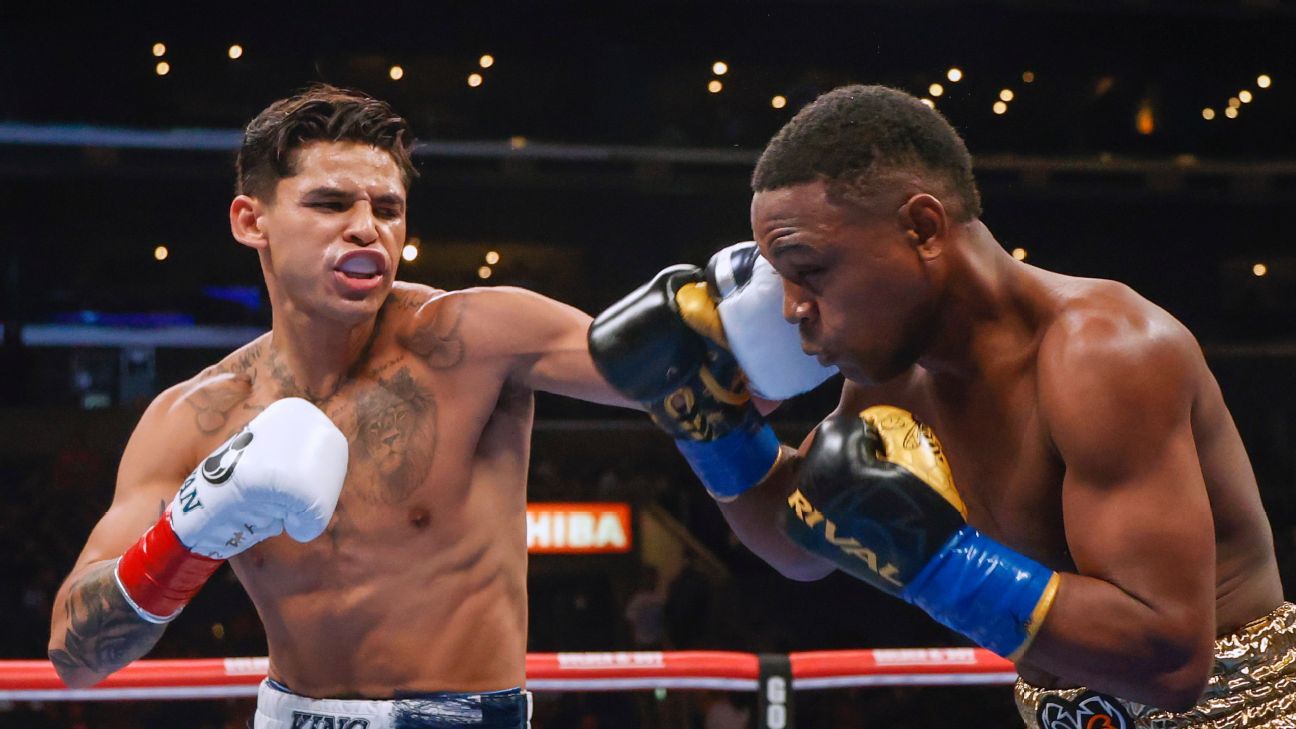 Following a disappointing performance in April, Ryan Garcia impressed against a far better opponent on Saturday with a sixth-round knockout of Javier Fortuna in a 140-pound bout in Los Angeles.

The 23-year-old star floored Fortuna in Rounds 4, 5 and 6, all the result of Garcia’s lightning-quick left hook. The first knockdown was produced by a body shot — and set up by a feint — but the following two hooks crashed into Fortuna’s chin.

After the last knockdown, Fortuna received the referee’s 10 count on one knee, the end of the fight coming 27 seconds into Round 6.

Garcia is ESPN’s No. 6 boxer at 135 pounds, but his last two fights have been contested at 140, a weight he said he’s far more comfortable at.

Davis, also a star fighter, campaigns at 135 pounds, but did fight at junior welterweight once, an 11th-round TKO of Mario Barrios last June.

Whomever Garcia fights next, he plans to fight December, and it’s apparent he’s improving after a tumultuous 2021.

Following a January 2021 TKO of Luke Campbell in a career-best victory, Garcia was set to fight Fortuna last July but withdrew to address his mental health. A November fight with former champion Joseph Diaz Jr. was scrapped after Garcia underwent surgery to repair his right wrist.

He returned in April to outpoint Emmanuel Tagoe, but there wasn’t much action in the fight and Garcia surprisingly never put the Ghanian away despite hurting him several times.

Garcia had no such issues against Fortuna, a 33-year-old Dominican who is ESPN’s No. 10 lightweight. He appeared to inflict damage every time he touched him. But Garcia wasn’t just far bigger than Fortuna, he was also much quicker. He consistently beat Fortuna to the punch and kept him at the end of his jab.

Fortuna rarely threw a punch, and when he did, the shots rarely met the mark. The right eye of Fortuna (37-4-1, 26 KOs) was swollen by the end. It was Fortuna’s second loss in three fights; he was outpointed by Diaz last July.

“They told me I was some guy who doesn’t care about boxing and who made up mental health [issues],” Garcia said.

With Garcia now returned to form, and with a second fight under the tutelage of Joe Goossen, he should be ready for far better opposition, whether it’s Davis, undisputed lightweight champ Devin Haney or any of the best fighters at his new weight class.

Jake Paul teasing move to MMA, says he has announcement soon
Eubank: We’ve Never Seen Conor Benn Get Hurt; Will He Be Able To Come Through That?
PODCAST: Is Eubank vs Benn any good? Plus Fury-Joshua, Spence-Crawford, more
All you need to know about the Benn-Eubank fight postponement and the last minute attempts to save it
Benn’s Trainer Does Not Expect Weigh-In Drama With Eubank Jr.