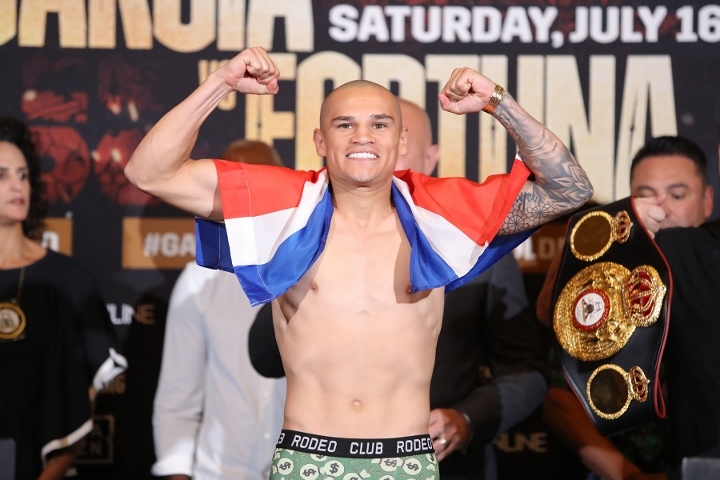 LOS ANGELES – David Jimenez made the most of the biggest opportunity of his career Saturday.

The unknown flyweight from Costa Rica upset Ricardo Sandoval by majority decision in their 12-round WBA elimination match on the Ryan Garcia-Javier Fortuna undercard at Crypto.com Arena. Jimenez dropped Sandoval in the 11th round and overcame a point deduction for holding and hitting in the seventh round to win on two scorecards.

Caesars Sportsbook listed Sandoval as a 16-1 favorite, but Jimenez (12-0, 9 KOs) ended Sandoval’s 16-fight winning streak and knocked him out of contention for a 112-pound title shot. Before Saturday, the 23-year-old Sandoval (20-2, 15 KOs), of Rialto, California, hadn’t lost since November 2016, when Alonso Ceja beat him by majority decision in a four-rounder that took place in Tijuana, Ceja’s hometown.

Prior to encountering Sandoval, the 30-year-old Jimenez had beaten a largely low level of opposition in Costa Rica and Panama.

A round after Jimenez dropped Sandoval, they traded hard shots during the second half of the 12th and final round.

Sandoval appeared to be in control when Jimenez’s right cross dropped him awkwardly with 25 seconds to go in the 11th round. Sandoval reached his feet quickly and avoided Jimenez for the remainder of the round to keep from getting dropped again.

Sandoval landed hard shots to Jimenez’s body during the middle minute of the eighth round. After stumbling into the ropes, Jimenez took a left hook from Sandoval that made him retreat with about 45 seconds to go in the eighth round.

Taylor took a point from Jimenez late in the seventh round for holding Sandoval and hitting him. That tactic worked well for Jimenez during the third round, when he held Sandoval’s right arm and blasted him with a right uppercut.