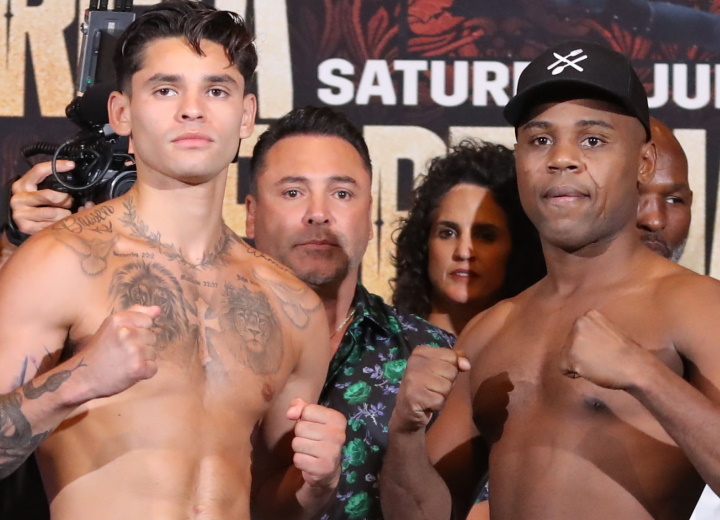 Ryan Garcia thinks Javier Fortuna may be a bit soft around the center heading into their fight Saturday night.

Both fighters stripped down to their underwear and tipped the scales in Los Angeles on Friday afternoon, with Garcia weighing 140 pounds and Fortuna weighing 139.8 pounds.

Immediately after the weigh-in, Garcia (22-0, 18 KOs) confessed on the DAZN Boxing Show that he thought Fortuna looked out of shape.

When Garcia was asked if Fortuna looked in shape at 140 pounds, he quipped, “F— no. When I saw him I was surprised, I was like, ‘why is he so chubby?’ He had to cut so much weight. I’m actually surprised he made 140 pounds. I’m not going to look too much into that. We’re going to fight. The hard work will show in the ring. If he gasses out, it’s because he didn’t work out … You can’t look too much into it. You have to watch out.”

The former world titleholder Fortuna (37-3-1, 26 KOs) countered and said in a separate interview, “My training will speak for itself in the ring.”

BoxingScene.com senior writer and columnist Keith Idec reported Friday that Fortuna preferred to fight Garcia at 140 pounds because he only had seven weeks to prepare for the fight.

Garcia had campaigned exclusively as a lightweight from 2018 till 2021, but his last fight in April took place at a catchweight at the suggestion of opponent Emmanuel Tagoe, and Garcia wound up weighing 138 1/4 pounds.

Garcia, who turns 24 years old next month, insisted that he’s not looking past Fortuna as he continues to pound the table for a big fight against Gervonta Davis.

“I’m denying all thoughts and expectations in my mind going into the ring. I’ve already positioned my mind to do that. I personally just want to display my skill level like I have been doing in camp. I want a knockout. I want to display two things – my skills, and a massive knockout.

“If I don’t get the knockout, but I box beautifully, don’t get touched, was countering, never got tired, was always in control of the ring – I will be happy. But if I do that, there’s a 99.9% chance he gets knocked out.”