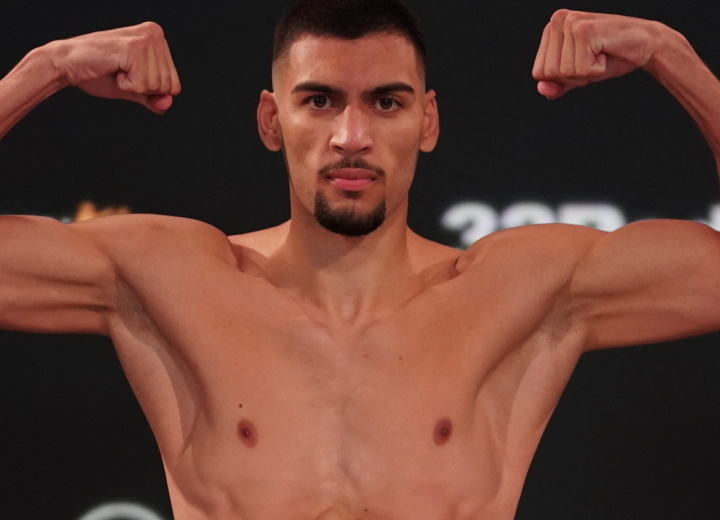 Hamzah Sheeraz continued to add to his growing reputation as he climbed off the floor to stop Francisco Emanuel Torres in the fifth round at the Copper Box in East London.

The 23-year-old – who moved to 16-0 – punched to straight and hard for Torres, knocking him down three times, including twice in the third round when Sheeraz was also knocked down.

The win won him a vacant WBC silver belt in his second fight at the weight class and, while he would have been annoyed to get caught as he did, he softened up the tough Argentinian and took him out impressively.

Sheeraz did little more than test his range in the first round, as he walked Torres around the ring pushing out his jab, while what punched the Argentinian threw bounced back off Sheeraz’s gloves.

Early in the second, as Torres missed with a shot, Sheeraz landed a jab, which made Torres over-balance backwards, but any question if he was hirst was soon answered as Sheeraz landed a huge right that Torres took well.

Early in the third round, Torres was on the floor from another left jab, but as Sheeraz went for the finish, he was caught by a right and dropped himself.

Sheeraz looked more annoyed than hurt and, remarkably, he had Torres over again in the same round, as a right hook knocked him down along the ropes.

The fourth round proved to be quite dull by comparison, as Sheeraz walked Torres backwards, working the jab well, and landing one hard right hand.

He would go on to finish the show in good style, though, as he continued to soften up Torres through the fifth round, landing two good chopping rights, before dropping him hard with a big right. Torres beat the count but looked unsteady on his feet and referee Mark Lyson waved it off. The official time was 1:56.