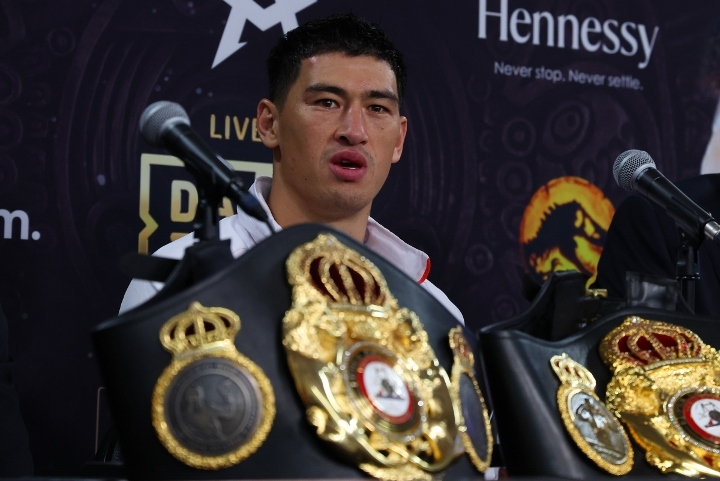 Eddie Hearn intends to fight the latest directive from the WBA.

The sanctioning body recently ordered a fight between its light heavyweight champion Dmitry Bivol of Russia and his top challenger, Gilberto ‘Zurdo’ Ramirez of Mexico. Bivol, whom Hearn promotes, is coming off a successful, career-changing defense in May with a victory over Canelo Alvarez. Ramirez is backed by Golden Boy.

The news complicates Hearn’s original plan, which was for Bivol to face off against one of his other fighters, Joshua Buatsi, in October in London.

Hearn said sanctioning body protocol allows for promoters to request exemptions for mandatory defenses and that he will do so for the latest order.

“In all those situations we would have a right to request an alternative fight, an exemption, which we will file with the WBA,” Hearn said on The DAZN Boxing Show. “No problem making the Zurdo Ramirez fight, but we had already made plans for the Joshua Buatsi fight in October. So we’ll speak to the WBA.”

Both Matchroom and Golden Boy have separate output deals with DAZN, the streaming platform, so a Bivol-Ramirez fight is theoretically easy to make on paper. A Bivol-Buatsi fight, of course, would benefit Hearn as both fighters are aligned with him, whereas Ramirez is not.

Oscar De La Hoya, the head of Golden Boy, has been making the media rounds recently clamoring for a Bivol-Ramirez fight.

“Eddie Hearn is not Bivol’s promoter, I am working with Bivol’s manager [Vadim Kornilov], that fight is going to be negotiated, it is going to be done,” De La Hoya told TV Boxeo.

“I am excited that Zurdo Ramírez finally has his chance, the one that he’s been waiting for, and he is more than ready to beat Bivol and to gain revenge for Canelo and for Mexico.”

Hearn naturally expects De La Hoya to push back against his exemption.

“Golden Boy will obviously put their argument forward and whatever way the decision pans out we’ll have to accept,” Hearn said.

Hearn noted that the WBA has its hands busy these days regarding consequential matchups. Hearn made it clear he has “no problem” making a fight between Bivol and Ramirez but his preference is for London’s Buatsi to have his title shot.

“There’s a few decisions waiting and pending with the WBA,” Hearn said. “Of course one is the Lee Wood-Leo Santa Cruz purse bid split which we’re waiting on. Now Leo Santa Cruz will request a unification with Rey Vargas, which was quite a sensational victory for him over the weekend (over Mark Magsayo). We didn’t expect that at all.

“On all these situations basically champions have ideas and governing bodies and mandatories get in the way of those ideas, then you all have to put your reasons forward and work out a solution and that’s one of the situations at the moment with Zurdo and Dmitry Bivol. No problem making that fight. We would like to do another fight first. If we’re not allowed we’re not allowed.”

Terence Crawford Expects Devin Haney To Defeat Vasiliy Lomachenko
“The better man won on the night and that’s boxing!” – Tyson Fury on Joe Joyce’s big win!
Lucas Ketelle: “I’m Inspired By People Who Make A Path For Themselves”
The Beltline: Fury vs. Charr is either a practical joke or an example of karma and retribution
Bridges to make first title defense vs. O’Connell