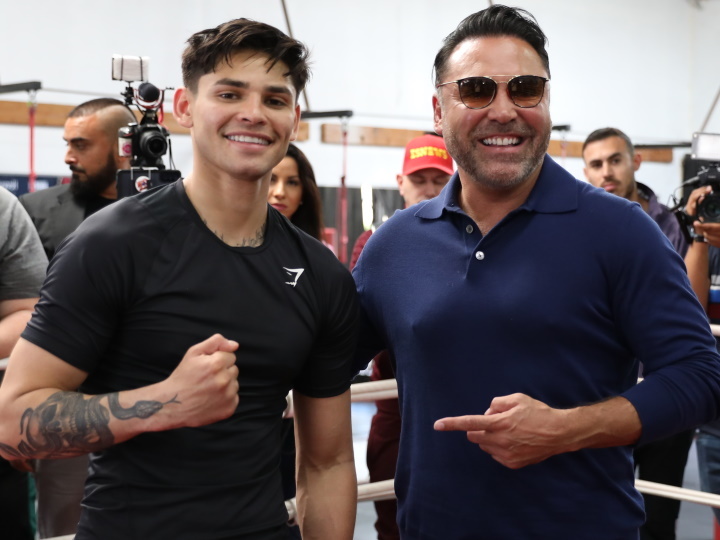 “The Golden Boy” believes the strong southpaw will present legitimate danger for Ryan Garcia on Saturday night at Crypto.com Arena. If the heavily favored Garcia wins, De La Hoya anticipates a difficult fight of his own when he tries to make the high-profile fight Garcia wants most – a showdown with Gervonta Davis.

Garcia’s promoter realizes that negotiations for that potential pay-per-view event will become complicated because Davis’ handlers, promoter Floyd Mayweather and adviser Al Haymon, have their own business interests to protect. In addition to their competing promoters, the teams for Davis (Showtime) and Garcia (DAZN) also will want to satisfy their broadcast and streaming partners, respectively.

Showtime has aired each of Davis’ last 11 fights either live on that premium cable network or on pay-per-view. DAZN has streamed all of Garcia’s past six fights.

“I mean, look, first thing is first,” De La Hoya said during a press conference Thursday at the Millennium Biltmore Hotel. “Like I said, Fortuna’s a very dangerous, dangerous opponent, two-time world champion. But Ryan Garcia wants Gervonta Davis. And as his promoter, I’m gonna get him what he wants. I’m gonna make that fight happen. It’s not gonna be easy because we know that on the other side of the street, there’s Al Haymon, who always wants to break up fights and keep the fighters amongst his stable only.

Baltimore’s Davis (27-0, 25 KOs) knocked out rival Rolando Romero (14-1, 12 KOs) in the sixth round of their grudge match May 28 at Barclays Center in Brooklyn. The 27-year-old Davis’ next fight hasn’t been scheduled, so he should be available to fight Garcia next if Garcia defeats Fortuna in a 12-round, 140-pound main event DAZN will stream.

The 23-year-old Garcia (22-0, 18 KOs) has been very vocal about boxing Davis next, but the Victorville, California native preferred to focus on Fortuna (37-3-1, 26 KOs, 2 NC) during and after their final press conference.

“You know, I deny myself to think about that right now,” said Garcia, who is listed by most sportsbooks as at least an 11-1 favorite over Fortuna. “I’ve talked about a lot of things that [could] happen. … I’ve already planned out in my mind to deny any thoughts of anything else. I have one objective – to destroy this man, and that’s it.”