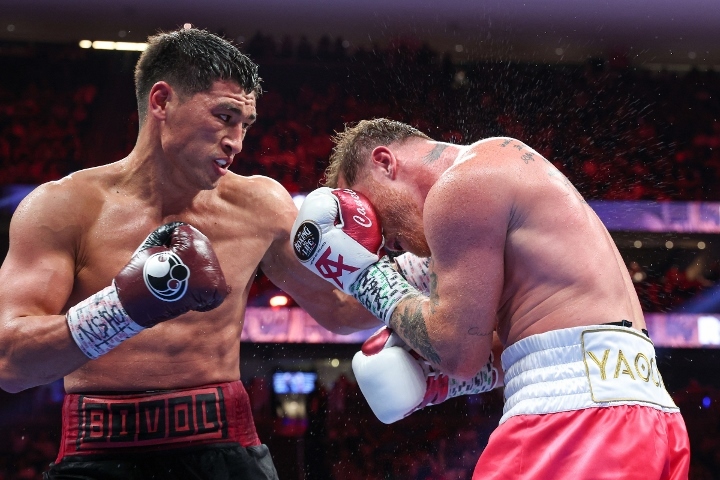 Oscar De La Hoya does not hold out much hope that his former charge Canelo Alvarez can defeat Dmitry Bivol in a rematch.

The founder of Golden Boy Promotions, De La Hoya was asked during a press pool for the upcoming Ryan Garcia vs. Javier Fortuna lightweight bout in Los Angeles about whether or not he thinks Alvarez can be successful against Bivol in a second fight. Bivol defeated Alvarez by unanimous decision in May to retain his light heavyweight title

De La Hoya, who parted ways with Alvarez on bad terms in 2020, was blunt about his former fighter’s prospects.

Alvarez, the undisputed 168-pound champion, had trouble landing his usual hard counters against the fleet-footed Bivol, whose feints and combinations kept the normally composed Alvarez somewhat off-kilter throughout their 12-round light heavyweight title fight.

De La Hoya pointed out that Alvarez has had trouble handling fighters who have nimble footwork, pointing to the previous example of Floyd Mayweather Jr. who handed the Mexican superstar his first career loss back in 2013.

De La Hoya, furthermore, added that Alvarez has a chance to beat Bivol, but only if he leaves his longtime trainer and manager Eddy Reynoso.

“Unless Canelo changes trainers, unless he changes trainers and he gets better, and his footwork [improves, he won’t beat Bivol],” De La Hoya said. “I think Canelo is too flatfooted for somebody like Bivol who uses his head and his intelligence.

“If you look at Canelo’s losses, which are only with Maywaeather and Bivol, he lost because of his footwork. He lost because the other guys’ being light on their feet and him being too heavy on his feet. If he does change trainers, he has a shot at beating Bivol.”

This is not the first time De La Hoya has spoken critically of Alvarez. Recently De La Hoya reasoned that Alvarez lost to Bivol because Alvarez had spent too much time playing golf leading up to the fight.

A rematch with Bivol may not take place until next spring. Alvarez (57-2-2, 39 KOs) is scheduled to defend his four 168-pound belts against sworn rival Gennadiy Golovkin (42-1-1, 37 KOs) in their trilogy bout Sept. 17 at T-Mobile Arena in Las Vegas on DAZN Pay-Per-View. If Alvarez defeats Golovkin, he is expected to try his hand at exacting revenge against Bivol (20-0, 11 KOs).