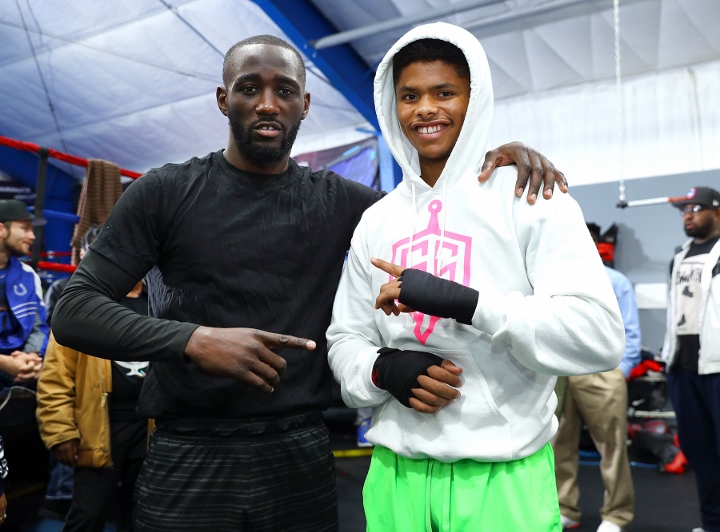 Shakur Stevenson has the kind of confidence that makes him believe he can beat Canelo Alvarez today and Floyd Mayweather Jr. in his prime—but that does not mean that he has never been on the receiving end of a beatdown.

In a recent interview, the southpaw ace and current WBO and WBC 130-pound champion recalled one of the few times — perhaps the only time — he had no answer for an opponent inside the ropes. The opponent? His friend and mentor Terence Crawford, the three-division titlist and current WBO welterweight champion.

It was only a sparring session, and Stevenson says he was just a 17-year-old amateur, but the experience of going toe-to-toe against one of the boxing world’s top fighters left Stevenson at the time feeling both humbled and inspired.

“This is one of the one times that I had to actually learn that I’m not the best!” Stevenson told Brian Custer on The Last Stand Podcast. “So I get in this ring and this dude started beating me up. We only sparred two or three rounds—they were four minute rounds—this dude beat me up so bad. I swear to God that was the worst whooping I ever had as a fighter.

“I couldn’t believe it. I went home that day like I could not believe what happened. Cuz it don’t happen to me. Cuz when I was a kid, I was beating up on pros all the time. It was something new.”

Stevenson, a decorated amateur, would go on to make a name for himself at the 2016 Rio Olympics, winning a silver medal. In the paid ranks, Stevenson has emerged as one of the sport’s most elusive and defensively responsible tacticians. He unified the WBC and WBO junior lightweight titles in April with a dominant points win over Oscar Valdez. Stevenson is set to defend his two titles against Robson Conceicao on Sept. 23 in Stevenson’s hometown of Newark, New Jersey.

Stevenson credited Crawford for influencing him as a fighter. Stevenson said the lopsided sparring session with Crawford spurred him to train even harder.

“Just being around ‘Bud’ Crawford, he’s a major reason why I am who I am,” Stevenson said. “He actually let me know there were levels and I had to step my game up. Even though I was 17 at the time I was a helluva 17-year-old. I used to win every tournament. I wasn’t like a normal 17-year-old.

“I just knew at that point in time I needed to get better than what I am. Get stronger, get better. Next time I get in the ring with this guy I want to be able to do something with him. He can’t just beat me up like that. I appreciate that dude for that. He’s one of the dudes I can say made me into who I am today.”

The 10 best wins of Chris Eubank Jnr and Conor Benn
Willito Ortiz To Go Pro on October 26, Inks With Split-T Management
Montiel: I Don’t Begrudge Charlo For Not Giving Me Rematch; A Lot More To Lose Than To Gain
Family is everything: How the Fundoras are building a boxing dynasty
Usyk’s Manager Says Deontay Wilder is Real Option For Next Fight