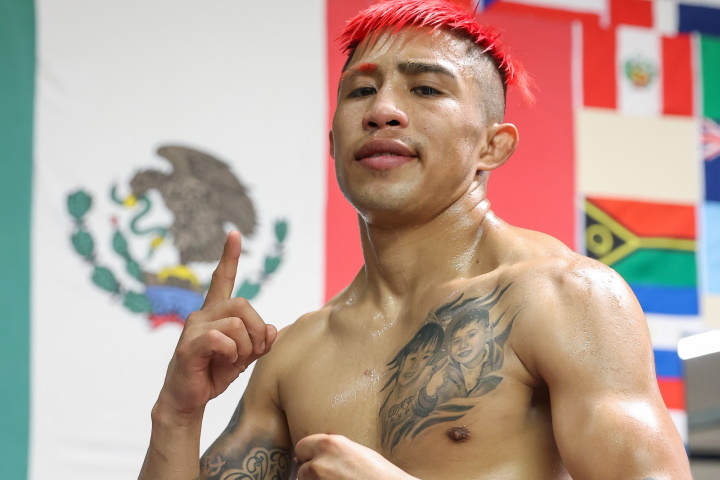 Julio Cesar Martinez and McWilliams Arroyo will put aside their title consolidation bout to instead allow for the first flyweight unification bout in nearly a decade.

BoxingScene.com has confirmed that terms were reached between Martinez and Arroyo that will see the two enter separate fights in lieu of an ordered WBC flyweight title fight rematch. The development allowed Martinez (18-2, 14KOs; 2NC) to instead pursue a title unification bout with unbeaten IBF flyweight champ Sunny Edwards (18-0, 4KOs), which will take place October 22 at a North America location to be determined.

The bout will mark the first flyweight unification bout since Brian Viloria knocked out Hernan ‘Tyson’ Marquez in the tenth round of their November 2012 slugfest to retain his WBO title and win the WBA belt that night. Arroyo’s consolation prize for allowing the fight to happen is a planned co-feature slot, in a dangerous interim WBC flyweight title defense against Mexico’s Joselito Velasquez in a battle of Olympians and current flyweight contenders. The deal reached between Martinez and Arroyo helped avoid a purse bid hearing that loomed ahead after their fight was re-ordered in late June.

ESPN Deportes’ Salvador ‘Chava’ Rodriguez was the first to report the development.

A fight between Mexico City’s Martinez and England’s Edwards was speculated for the past few weeks. It required Martinez’s team—Matchroom Boxing and Canelo Promotions—to work out terms for Puerto Rico’s Arroyo (21-4, 16KOs) to stand down after already watching their planned June 25 fall through. Martinez withdrew during fight week, citing a bout with gastroenteritis as the cause for his inability to defend his title.

The development marked the third time that Martinez postponed a fight with Arroyo in the past two years. Their lone occasion to make it to the ring occurred last November and only lasted two rounds. Both hit the deck before Arroyo was forced to quit on his stool after two rounds due to a cut that was produced from a clash of heads, thus ending their DAZN-aired co-feature from SNHU Arena in Manchester, New Hampshire.

Arroyo has not fought since then, while Martinez dropped a twelve-round decision to Roman ‘Chocolatito’ Gonzalez (51-3, 41KOs) in a non-title fight at junior bantamweight this past March 5 in San Diego.

Martinez has held the WBC flyweight title since December 2019, winning the vacant title in a ninth-round knockout over former titlist Cristofer Rosales in Phoenix, Arizona. The belt became available when Charlie Edwards, Sunny’s older brother by three years, against whom Martinez initially earned a third-round knockout before the result was changed to a No-Contest in their August 2019 title fight in London.

The 26-year-old Edwards claimed the IBF title after masterfully outboxing longtime champ Moruti Mthalane last April 30 at the famed York Hall in Bethnal Green, London. Two successful defenses have followed, including a twelve-round, unanimous decision over Muhammad Waseem on March 19 in Dubai, United Arab Emirates.  Edwards has fought predominantly in the UK, with the exception of his last two bouts in Dubai and pro debut in Spain. A trip to North America will mark the first such occasion as a pro for Edwards, along with his third straight fight outside of the UK.

Arroyo—who represented Puerto Rico in the 2008 Beijing Olympics—also deserves credit not just for allowing the fight to move forward but for taking a major risk ahead of a guaranteed title fight.  The veteran contender welcomes the challenge of Velasquez (15-0-1, 10KOs), who represented Mexico in the 2016 Rio Olympics and who trains under Eddy Reynoso, Martinez’s manager.

Velasquez is coming off a sixth-round knockout of Colombia’s Jose Soto this past May 7 on the undercard of stablemate Saul ‘Canelo’ Alvarez’s twelve-round loss to WBA light heavyweight titlist Dmitry Bivol at T-Mobile Arena in Las Vegas.

Alvarez (57-2-2, 39KOs) will return to the super middleweight division, defending his undisputed championship against Gennadiy Golovkin (42-1-1, 37KOs) in a trilogy clash set for September 17 also at T-Mobile Arena. There was loose talk of Martinez landing on the show, though such rumors were since debunked. Martinez will instead star in his own show, assuming past issues don’t prevent him from making it to the ring on fight night.

‘WE’RE NOT F*CKIN AROUND! ‘Eddie Hearn confirms LAWSUIT VS JAKE PAUL
Danny Garcia’s 2012 Barclays Center debut did NOT disappoint! 💥🥊
“The better man won on the night and that’s boxing!” – Tyson Fury on Joe Joyce’s big win!
Benn insists he’s a clean fighter as Eubank showdown hangs in limbo
The Chances For A December Fury-Joshua Fight Are Now Very Slim – And That’s Too Bad