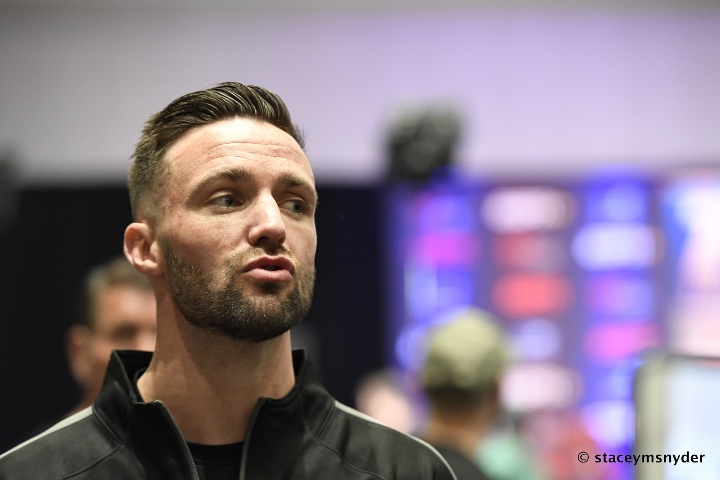 Josh Taylor believes he has done everything possible on his end to make an immediate rematch with Jack Catterall and that the ball is now firmly in the latter’s court.

The former undisputed 140-pound champion from Scotland said he is waiting on England’s Catterall to respond to an offer but warned that he will not wait for long.

In February, Taylor won a controversial points decision over Catterall, sparking cries of robbery in the boxing world. Taylor admittedly struggled with fellow southpaw Catterall, who even scored a knockdown in the fight.

Taylor recently relinquished his WBA and WBC titles in order to pursue a rematch with Catterall, squashing hints that he might move up to 147.

Taylor made it clear in a recent interview that he wants the Catterall rematch. If the fight does not happen next, however, Taylor said he would still be open to the rematch but that it would have to take place in a higher weight-class, presumably 147.

“I want the fight, to revisit it, to show everybody up,” Taylor told iFL TV. “[I want to] revisit that bad night for myself, put it right. If it’s not next, which is what I really want, I will do it at some point down the line. But it won’t be at 140, though, if it’s down the line.”

Taylor (19-0, 13 KOs) has long insisted that he did enough to beat Catterall (26-1, 13 KOs) but says he was hobbled by injuries and weight issues going into their fight.

“Going [into the fight] I was just sh!t,” Taylor said. “I was crap. Couple of injuries in camp, I came in too heavy. I wasn’t motivated as well. It was just a bit of everything. It was a crap performance.”

“It’s on his side,” Taylor said of his fight offer to Catterall. “Not any response yet. I’ve done all I can do. At the same time I’m not gonna wait around. I’m in the good part of my career. I want to be involved in big fights. I’m not going to pause my career and put my career on hold because of him.”

In a message to Catterall, Taylor pleaded for him to stop dilly dallying.

“Get your finger out your ass, man,” Taylor said, “and hopefully we can get this fight on.”