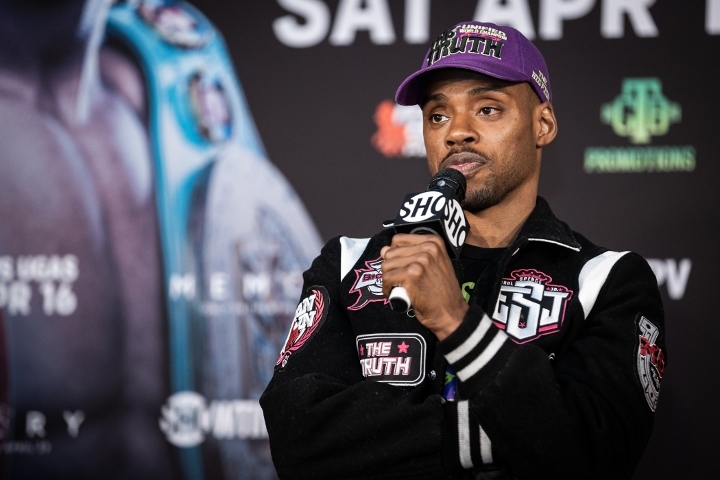 Errol Spence did his best to strictly wear his promoter’s hat this week but knew that questions about a Terence Crawford fight would soon surface.

The topic came up in a hurry in between fights on Showtime’s tripleheader Saturday evening from Alamodome in San Antonio, Texas. Spence was on site in support of rising lightweight Frank Martin, who fights under the unified welterweight champion’s Man Down Promotions banner and who emerged victorious in a tenth-round knockout of Jackson Marinez in the televised opener.

No sooner did Spence finish his thoughts on Martin’s performance, a request from Showtime’s Jim Grey called for an update on the desired undisputed welterweight championship with Omaha’s Crawford (38-0, 29KOs).

“I think it’s gonna happen. He wants the fight. I want the fight,” Spence stated, consistent with his response earlier in the week that he feels the fight is closer than ever to becoming a reality. “It’s going down to negotiations. It’s definitely gonna go down this year.”

The fight has been discussed for as long as their welterweight title reigns have overlapped. Spence (28-0, 22KOs)—a gifted southpaw from Desoto, Texas—has held the IBF title since May 2017, adding the WBC and WBA straps along the way. Crawford became a three-division titlist in June 2018 following a ninth-round knockout of Jeff Horn to win the WBO welterweight title.

Prior to this past April, the closest they’ve come to creating genuine belief in a head-on collision came during a backstage meeting in November 2018 when both were on site for an ESPN telecast from Chesapeake Energy Arena in Oklahoma City. A video by ESNews’ Elie Sekbach capturing the spirited conversation between the two quickly went viral, only to lead to three-plus years’ worth of letdowns for those who awaited the fight to materialize.

The matchup picked up steam earlier this year, when Crawford became a promotional free agent after spending years under the Top Rank banner. Spence furthered the cause by name-dropping Crawford after his tenth-round stoppage of Yordenis Ugas on April 16 to unify the WBA/WBC/IBF titles. The WBO is the last chip to crowning the division’s first undisputed champion in the four-belt era, along with the winner emerging as the sport’s pound-for-pound king.