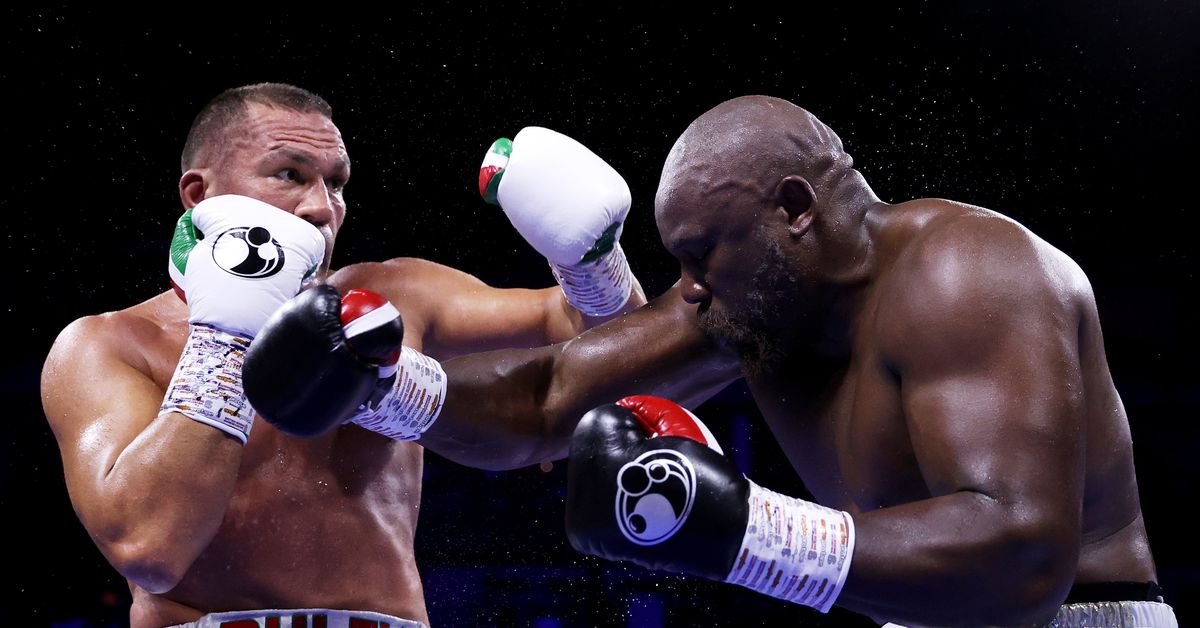 Derek Chisora was the underdog, was counted out, and some felt he should have retired before today’s rematch with Kubrat Pulev. But Chisora pulled off the surprise in London, scoring arguably the best win of his career at age 38

Pulev beat Chisora by split decision in Hamburg, Germany, in 2016, a fight that — in my opinion, anyway — was a pretty clear Pulev win. But this version of Chisora may have surprised Pulev by just how active he was, how much pressure he was putting on, and how relentless he was.

Now, to be fair here, a lot of what Chisora did was technically not legal, but referee Marcus McDonnell was pretty lenient from the get-go, dishing out more warnings than you’ll see over a full eight-fight card most nights.

In short, it was not pretty, but it was a rugged, physical fight, the kind Chisora needed to beat the 41-year-old Pulev, who remained calm throughout but never quite got into the sort of rhythm he needed on offense.

“I think I last won a fight three years ago. It’s been a while. It was hard,” Chisora said. “Pulev’s a great fighter, very difficult. I trained hard. I’m happy today, and at the same time I’m sad. I don’t have many left in me, but what I have, I’m going to give it all to you guys.

“My next couple fights, I’m on my way out. I don’t want no easy fights, I want hard fights. I told Eddie (Hearn) the other day, if he can get me (Deontay Wilder), I’d be happy. I want to fight everybody in my era — win or lose, I just want to fight.”

Chisora talked about having “lost so many fights on the road” in his career and needing this win, and added that if Pulev had gotten his hand raised in the end, he’d have just about the same attitude he does in victory.

“Mate, I’m used to it, bro. If they’d gave it to him, I just would have jumped on the train again and carried on,” he stated. “I’m used to getting robbed. It wouldn’t be new to me. I wouldn’t be upset, I’d just move on. God has got a plan for me. I don’t know what it is, but we’ll find out soon.”

“Chisora deserved one tonight,” promoter Eddie Hearn said. “It was a close fight, and when they read out the split, ‘I thought, please, please’ — I was going to run from the ring! He’d come after me. But he’s had so many close decisions not go his way. He just beat a world top 15 fighter, probably top 10 heavyweight. We’ll see what the future holds. I was just desperate to see him win tonight. He’s got such a big heart, he never quits.”

Chisora then suggested, to Hearn’s face — in a joking manner, but also obviously serious — that he wants to be paid more now, or he’d “go to the other side,” suggesting fighting for other promoters. Truthfully, if the bigger money is there from Boxxer or Queensberry, Chisora at this stage of his career should do what’s best for him.

This was a rematch and WBA eliminator again at 154, following a very controversial stoppage win for Madrimov last December in Uzbekistan. Madrimov (8-0-1, 6 KO) was dominant through two rounds here, just battering away on Soro (35-3-2, 24 KO), and then five seconds into the third round, the heads clashed, Soro had a huge, pouring cut on his forehead, and the fight was ruled a technical draw, basically a no-contest but will count as a draw on their records.

Personally, I don’t think the WBA should order a third eliminator here, but I also don’t think they should just order Madrimov as a mandatory, so, y’know — pick your poison, I guess. Tony Bellew and David Haye believed the fight should not have been stopped on the cut since it wasn’t bleeding into the eye, and getting a clearer look at location after all was said and done, I think I kind of agreed with them.

The little we got to see, the 27-year-old Madrimov was looking better than ever, sort of Golovkin-ish with his approach, while the 34-year-old Soro was looking flat and worse than ever by quite a lot. He’s a good fighter, Soro, but he was getting trucked for six minutes here.