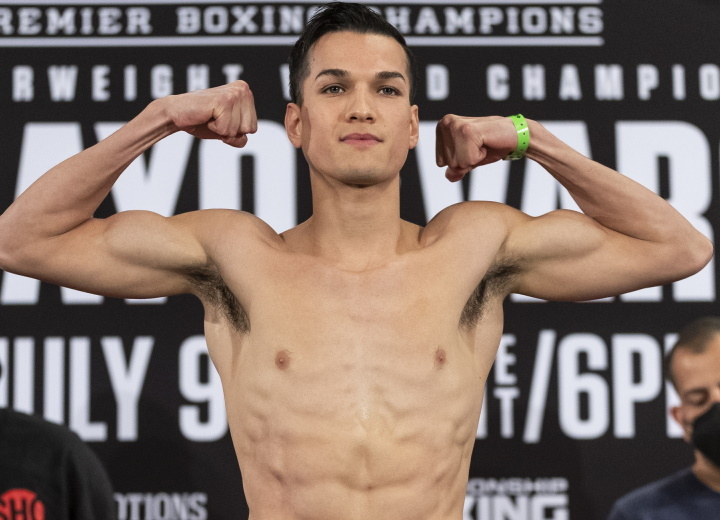 SAN ANTONIO – Carlos Castro came to fight Saturday night, but Brandon Figueroa’s ferocity was just too much for him.

The relentless Figueroa’s volume overwhelmed Castro in the sixth round of a WBC featherweight elimination match at Alamodome. Referee Mark Nelson sensed Castro, who got up from a third-round knockdown, had taken too much punishment when he stepped between them with Castro backed against the ropes.

Nelson halted the action 2:11 into the sixth round of a fight Showtime televised as the co-feature before Mark Magsayo’s first defense of the WBC featherweight title against mandatory challenger Rey Vargas.

Figueroa (23-1-1, 18 KOs) defeated Castro in his first fight after losing his WBC 122-pound championship to Stephen Fulton in their fan-friendly “Fight of the Year” candidate November 27 in Las Vegas. The Weslaco, Texas native had decided to move up to the featherweight limit of 126 pounds before he fought Fulton, but he hopes to get a rematch once Fulton (21-0, 8 KOs) moves up to the featherweight division.

The 25-year-old Figueroa’s victory over Phoenix’s Castro (27-2, 12 KOs) moved Figueroa into position to eventually get a shot at the Magsayo-Vargas winner.

Castro also moved up from 122 pounds to 126 to face Figueroa.

Before Figueroa finished Castro in the sixth round, Castro caught Figueroa with a shot that backed him up and made him hold Castro approximately 1:15 into the fifth round. Figueroa’s right hand snapped back Castro’s head earlier in the fifth round.

Castro recovered after suffering a knockdown during the third round to make the fourth round reasonably competitive. Figueroa forced him to fight off his back foot throughout that round, but Castro connected with enough head and body shots to keep Figueroa honest.

Figueroa unloaded an array of power punches when Castro backed into the ropes at about the halfway point of the third round. After absorbing a left hook up top and then a left hook to the body, Castro fell to the canvas with about 1:20 on the clock in the third round.

Castro calmly took his time to get up and just beat Nelson’s count.

Figueroa ferociously attacked Castro with numerous power punches. Though backed against the ropes, Castro commendably withstood the relentless Figueroa’s onslaught and made it to the fourth round.

Castro caught Figueroa with back-to-back right uppercuts with about 40 seconds to go in the second round. Figueroa later landed a left hand that backed Castro into the ropes toward the end of the second round.

Figeuroa’s right hand turned Castro’s head with just over 1:10 to go in the opening round. Castro snuck in a right hand as Figueroa pressed forward with 15 seconds remaining in the first round.

Anderson Silva is not just another MMA fighter taking on Jake Paul in boxing
Eubank: I Can’t Not Underestimate Benn; Hasn’t Been In With Any Dangerous Fighters
Editor’s Letter: While Fury and Joshua tease a mega fight, chaos reigns in the amateur game
Fury or Usyk? Believe it Joe Joyce, you really did it! 🤣 Chatterbox With Josh Denzel & Carl Frampton
Andrade withdraws from interim title fight with Parker, Ryder next in line