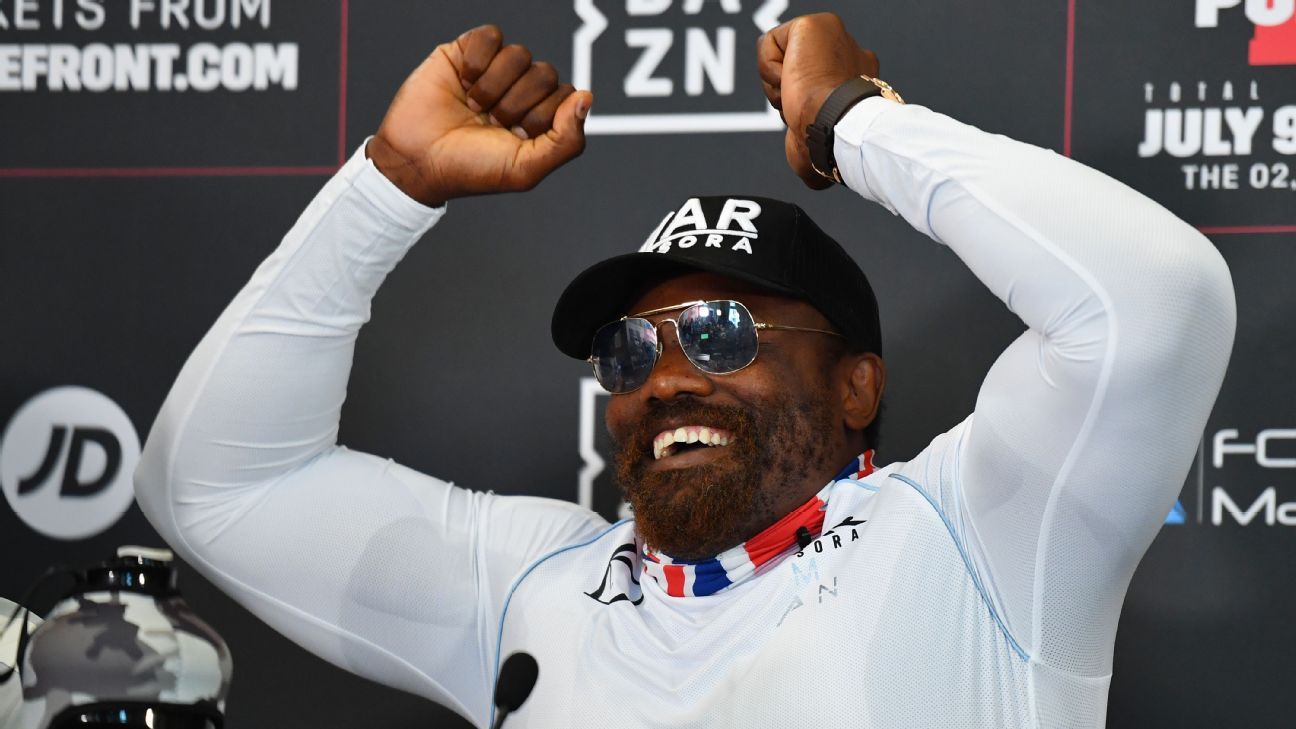 Defeats usually damage the careers of boxers, who can lose ranking, popularity, television deals and relevance after a series of setbacks. But not for Derek Chisora. He loses more often than he wins now — his record now shows 12 defeats — but he remains in the spotlight. He last fought for a world title a decade ago and was beaten in his last three fights. Yet Chisora’s popularity among boxing fans — especially in his native United Kingdom — is as strong as it has ever been. His personality endures.

Earlier in his career, Chisora (32-12, 23 KOs) was a controversial figure. The height of that came when he brawled with rival David Haye at a press conference, which resulted in a police investigation and ban. There were other incidents too: a previous suspension for biting an opponent in the ring, a slap on Vitali Klitschko at a weigh-in before their 2012 world title fight, spitting water at Vitali’s brother Wladimir. In 2016, he even threw a table across the room at a news conference.

More recently, though, Chisora has become synonymous with boxing entertainment and the heart he shows in fights, no more so than in defeat. Rather than winning to progress towards world title contention, Chisora’s focus seems to be on bringing value to viewers.

“My plan is my fans, that is it,” Chisora said.

“Entertainment, that’s what I like. I’ve lost so many fights, I’ve won a couple of fights. I’ve won things that I wanted to win. I prefer fighting.

“I don’t have to be liked by everyone. I know what I’ve got, and I sell a product to people who want to have that product. And that product is war. I train hard. I’ve got passion for the game.”

Chisora says that passion is driving him on, with no reflections on retirement despite some recent punishing fights.

“I’m not retiring for s–t,” Chisora told reporters this week. “I enjoy it. The whole thing. When I don’t enjoy it, I’ll announce my retirement.”

Roll on this Saturday. Chisora says he badly wants to beat Kubrat Pulev at the O2 Arena in London, six years after losing a disputed split points decision to the Bulgarian. Chisora is looking for his first win in nearly three years after points defeats to Joseph Parker (twice) and Oleksandr Usyk, now the reigning WBA-IBF-WBO heavyweight champion.

“He had a fight a couple of weeks ago, but he boxed a nobody who hasn’t got any of my skills. I’m going to eat his leather and I’m going to deliver my leather.”

Two-time world title challenger Pulev (29-2, 14 KOs), 41, unanimously outpointed Jerry Forrest in California and is hoping for a better outcome than his last trip to London, when he was knocked out in the ninth round by Chisora’s compatriot Anthony Joshua for the WBA, IBF and WBO titles in December 2020.

“For my fight against Joshua here in London, I was not well prepared before the fight,” Pulev said.

“Before that fight I had COVID-19, and I didn’t say anything about it. I was not prepared, no sparring and no nothing. It was only my mistake. Now, I’m healthy and I’m good and I’m here to fight.”

Devin Haney On Being Avoided: “They Still Don’t Want To Fight Me”
Deontay Wilder vs. Tyson Fury 2 – FULL PRESS CONFERENCE | Heavyweight Boxing
Adrien Broner Calls Out Nate Diaz to Crossover Fight
Usyk on Joshua Outburst: ‘He Reminded Me of a Little Boy’
Eubank vs Benn, more: Boxing TV and streaming schedule for Oct. 6-8