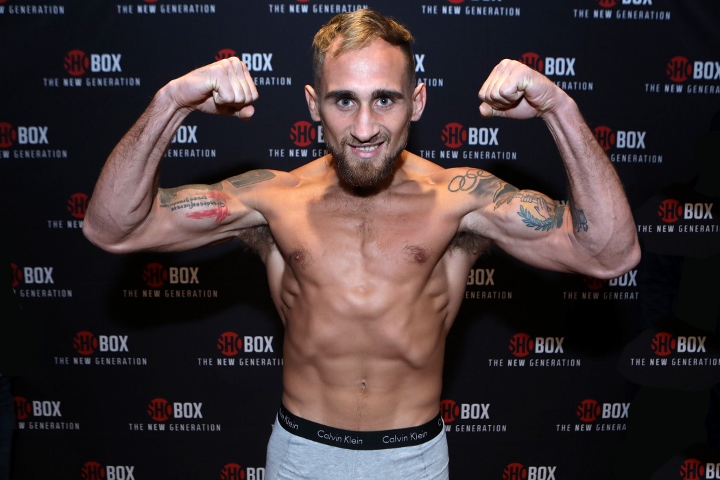 Rashidi Ellis is not off to the fresh start he hoped would come with new representation.

BoxingScene.com has learned that Argentina’s Alberto Palmetta (17-1, 12KOs) has suffered a back injury and has been pulled from his planned welterweight bout with Ellis. The two were due to collide this Saturday at Alamodome in San Antonio, Texas, with their bout to air live on Showtime’s YouTube channel preceding a televised tripleheader.

Ellis’ placement on the show is questionable at best, with the likelihood that he will have to eye a future date for his Premier Boxing Champions (PBC) debut given the development has taken place so close to fight night. The 29-year-old from Lynn, Massachusetts signed with PBC earlier this year after having not fought since an October 2020 win over Alexis Rocha in a battle of unbeaten welterweights.

Ellis (23-0, 14KOs) was then sidelined for more than a year while still under contract with Golden Boy Promotions before becoming a promotional free agent.

The rest of the Showtime card remains intact, though only after a replacement was sought for one other bout.

Rising lightweight prospect Frank Martin (15-0, 11KOs) will open the telecast against fringe contender Jackson Marinez (19-2, 7KOs), who was brought in after originally scheduled Ricardo Nunez (23-3, 21KOs) of La Chorrea, Panama was unable to secure a travel visa in time.

Former WBC junior featherweight titlist Brandon Figueroa (22-1-1, 17KOs) of Weslaco, Texas faces Phoenix’s Carlos Castro (27-1, 12KOs) in the evening’s co-feature, which is advertised as a WBC featherweight title eliminator. That status would put the winner in line to challenge whomever emerges victorious in the main event between Philippines’ WBC featherweight titlist Mark Magsayo (24-0, 16KOs) and Otumba, Mexico’s Rey Vargas (35-0, 22KOs), an unbeaten former WBC 122-pound titleholder who is the betting favorite to become a two-division champ on Saturday.