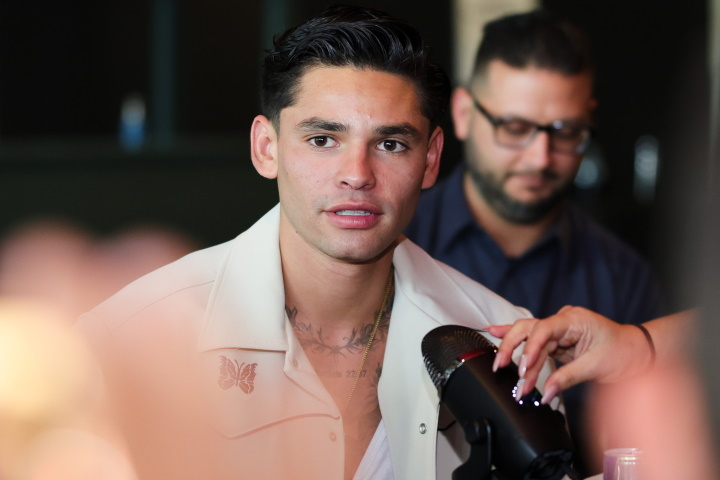 The upstart boxer boasts nearly nine million followers on Instagram, but he knows his star appeal can break past social media boundaries with the right dance partner.

Garcia deems Gervonta Davis as the perfect opponent to make him into a bonafide star.

“I want Tank Davis next,” Garcia told BoxingScene.com and other reporters while promoting his July 16 fight against Javier Fortuna at the Crypto.com Arena in Los Angeles on DAZN.

“A huge pay-per-view fight would involve me and somebody else. And I probably do need a little bit of Tank Davis to make a super mega-fight, but I don’t have an ego to admit that. I don’t care. I know Tank is a big fighter, and I am as well. Whoever wins that fight becomes the face of boxing.”

Mayweather Promotions CEO Leonard Ellerbe presides over the career of Davis, and the executive has proclaimed that he’s attempted to make the fight on two separate occasions to no avail.

Garcia tried to take matters into his own hands by sitting ringside in Davis’ last fight in New York when Davis knocked out Rolando Romero.

Garcia had a colorful exchange with Ellerbe demanding a deal get done.

“[Davis] said ‘f’ me. Then why are you screaming my name talking about ‘you next’ [after the Romero fight]. Why should I shut up?” said Garcia. “He’s the one talking like that. Now it’s like either you want to do it or do you not want to do it. Don’t tell me you want to fight if you’re really not going to be about it. He can say shut up all he wants. He wants that fight.”

Garcia will have to demand Golden Boy Promotions to equally force the issue and solve the Rubik’s cube that is the fractured state of boxing with rival promoters and networks.

“Where there is a will there’s a way,” said Garcia. “Think of every possibility and just don’t be greedy, and I’m sure that both parties can come up with an agreement that is fair and firm and honorable at the same time. You just have to look at it in all of those aspects. Look at the data to prove your points and then you move forward.

“You just have to look at who is the bigger draw, and why, and then show the data for it. Numbers don’t lie. There are a lot of people saying this guy is bigger than this guy, but all you have to do is look at the data, and you go from there. If they can’t look at the reality of it, that’s not my problem.”

Garcia campaigns in the lightweight division, and it is stacked with star fighters. Devin Haney is currently the undisputed champion, and there are the likes of Vasiliy Lomachenko and Teofimo Lopez Jr. fighting at or near the weight class as well.

“I’m pretty sure I want to fight the bigger and better fighter in Gervonta Davis. I’m not worried about JoJo Diaz,” said Garcia.

Eubank: I Can’t Not Underestimate Benn; Hasn’t Been In With Any Dangerous Fighters
‘WE’RE NOT F*CKIN AROUND! ‘Eddie Hearn confirms LAWSUIT VS JAKE PAUL
Joyce Wants Usyk Next, Also Calls Out Fury, Joshua, Wilder, and Whyte
Hitchins vs. Alamo, Ford vs. Lukas Added To Love-Spark Card
Plant: Dirrell Couldn’t Even Hold His Title Long Enough For Us To Have A Unification Match