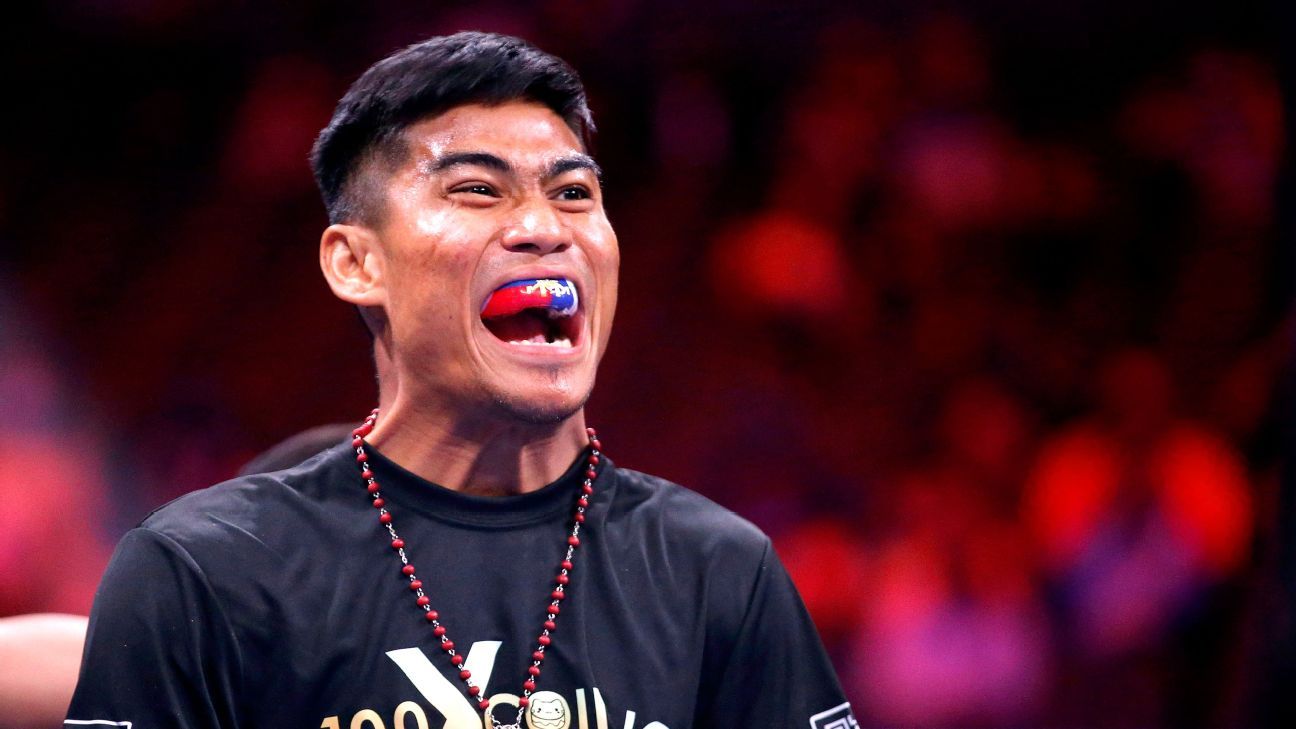 Pacquaio officially retired from boxing in September, and although there will never be another Pacquiao, there’s an opening for a fellow countryman to be the new flag bearer for Philippine boxing.

Nonito Donaire was destroyed in two rounds by Naoya Inoue in June, and the near 40-year-old is being urged to retire. Donnie Nietes is 40 as well and fights Kazuto Ioka on July 13 for the super flyweight title, but his best days are behind him. Jerwin Ancajas’ five-plus year reign as world champion ended in February.

Jayson Mama suffered his first career loss in a world title opportunity against Sunny Edwards in December. John Riel Casimero was accused of sexual abuse and was stripped of his WBO bantamweight title in May after failing twice to fight in scheduled bouts.

Although Rene Cuarto currently stands as a strawweight title holder, the Filipino fighter who appears to have the makings of the country’s next top fighter is Magsayo.

The 27-year-old Magsayo (24-0, 16 KOs) is the WBC featherweight champion, a belt he owns after beating Gary Russell Jr. in January. Magsayo is promoted by Pacquaio, and the pupil will look to further prove his promise and potential when he makes the first defense of his title on July 6 against former world champion and mandatory challenger Rey Vargas (35-0, 22 KOs).

Magsayo’s tough test will take place at the Alamodome in San Antonio, the same venue where Pacquiao enjoyed his breakout performance in 2003 with a stunning stoppage win against Marco Antonio Barrera.

Watching on TV in Philippines that night was an eight-year-old Magsayo, who decided to pursue a professional boxing career immediately following the fight.

Magsayo went on to accomplish his goals and even wound up training and fighting alongside Pacquiao, who made his pro debut in 1995 — six months before Magsayo was born.

“It’s an honor to be following in the same path as Manny Pacquiao,” Magsayo told ESPN in an interview following a recent workout in Griffith Park.

“My dream came true when I won the world title. I am even more motivated now as a world champion. My new goal is to become a unified champion. I know I have to work harder to improve.”

During the 23-day trip to the Philippines, the Bohol-bred Magsayo discovered he’d evolved into a star.

“Wherever we went, everything stopped,” said Frances. “Children were running up to him and asking for photos. It was not normal for him, but he’s happy that the people are receiving him warmly and are proud.”

“There’s a little bit of pressure when they look up to me like that,” admitted Mark. “I’m proud to bring honor to my country. I’m so happy that they support me. I have to make my own name in boxing, and I will do my best with every fight and opportunity.”

Pacquaio explained during the meeting how proud he was, and reaffirmed that hard work would push Magsayo to new stratospheres. The group also watched fight tape on Vargas.

“I was so happy he made time to talk with me. It was surreal,” said Magsayo. “He told me the key to beating Vargas is working on footwork and head movement, staying humble, and praying. I believe in God, and I believe in Manny Pacquaio.” Magsayo is trying to mimic the same formula that made Pacquaio a generational fighter.

Magsayo trains at the Wild Card Boxing gym with Hall of Fame coach Freddie Roach, who cornered Pacquiao for two decades. Magsayo’s career is being shaped by Pacquiao’s longtime handler Gibbons. Magsayo even does the same workouts Pacquiao made famous in the Hollywood hills.

Equally important, in order to become a fan favorite and can’t-miss commodity, Magsayo is following in Pacquiao’s footsteps and taking on all comers of all sizes.

Vargas is a physically imposing Mexican slugger who will sport a near five-inch height and three-inch reach advantage against Magsayo. The 31-year-old Vargas was a super bantamweight champion and defended his title five times, but he’s fought just once since July 2019 — a 10-round decision win against Leonardo Baez in November.

“Recent activity is going to be a big key in this fight, and Mark is sharper than sharp,” said Gibbons. “Mark’s demeanor and work ethic hasn’t changed and he’s more determined now than he was when he beat Russell. Success hasn’t gotten to his head.”

Roach envisions Magsayo fighting at close quarters and unleashing combinations in order to score the win against Vargas.

“The journey has been a lot of fun. He’s a great worker and trains very hard. Mark’s improving all the time, getting stronger, and hitting harder,” said Roach. “He’s working the body better. He listens to me pretty well. When I tell him to finish the fight strong, it’s all business and he knows exactly what that means. Vargas doesn’t have a lot of weaknesses, but if we break the body down and take the legs away, Vargas will fall.”

Magsayo has not made it look smooth, however, showing some wrinkles in his game each time he’s stepped up.

“We’ve found out in the last two fights that Mark has what it takes to be a world champion,” said Gibbons.

Against Ceja, Magsayo was dropped and down on the cards and en route to a decision loss when he rebounded to score a remarkable 10th-round knockout.

Should Magsayo get by Vargas, Gibbons’ plan is to pit Magsayo against four-division champion Leo Santa Cruz later this year.

Magsayo understands the magnitude of the upcoming matchup.

“I need to win this fight against Vargas,” he said.

If Magsayo can beat Russell, Vargas, and Santa Cruz in 2022, he’ll certainly be a frontrunner for fighter of the year — an honor the BWAA bestowed on Pacquiao three different times.

Magsayo believes his breakout year will take him even further, and punch his ticket to the Hall of Fame should he beat the trio.

“Winning the title doesn’t set a fighter for life professionally or financially,” said Gibbons. “He’s making solid money right now, but the next one [potentially against Santa Cruz] could be life-changing. Then he can start living the American dream.”

Magsayo is already pre-approved for a loan, and he wants to use his earnings to ditch the Hollywood apartment he’s renting and buy a home in Los Angeles, just like he’s done in Philippines.

He already holds the title of world champion. A priceless and prestigious title that once belonged to Pacquaio could also be earned should the wins keep coming.

“I think he’s the next face of Filipino boxing,” said Roach.

Gibbons doubled down on the statement.

“He’s like Manny Pacquaio — grounded, humble, and a man of the people,” said Gibbons. “It’s his destiny — Pacquiao passed the torch to Mark. I really firmly believe that. If he beats Vargas, he’s absolutely going to be the new face of Filipino boxing.”

Martinez vs Arroyo 2 joins Estrada vs Chocolatito 3 in Glendale
Chris Eubank Jr v Conor Benn: The story of a grim day for British boxing
Anderson Silva is not just another MMA fighter taking on Jake Paul in boxing
Wilder ‘Felt A Little Sluggish, A Little Heavy’ In 3rd Fury Fight; Will Be In 220s For Helenius
All you need to know about the Benn-Eubank fight postponement and the last minute attempts to save it