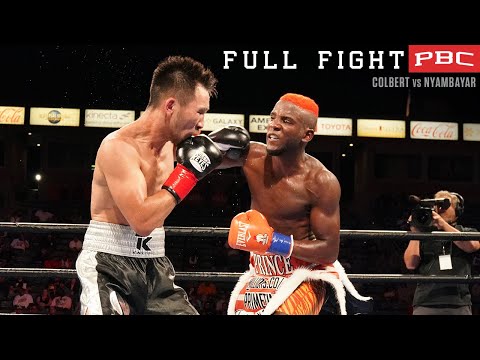 The 24-year-old Colbert (16-0, 6 KOs) rode a dominant jab to victory as he landed 112 across the 12 rounds according to CompuBox, buoying a 218 to 78 advantage in punches landed. The Brooklyn-native used the jab to set up a variety of effective power punches that he was able to land from orthodox and southpaw stances.

Mongolia’s Nyambayar (12-2, 9 KOs), who now fights out of Los Angeles, stepped in to fight Colbert on less than two weeks’ notice, replacing former champion Yuriorkis Gamboa after he suffered a training camp injury. Nyambayar had successful moments in his 130-pound debut, with Colbert even noting the Olympic silver medalist’s power, but he was unable to keep up a sustained attack or keep the busier Colbert from controlling the tempo.

Colbert rode his versatile offensive arsenal to a big advantage on the scorecards and statistically, dominating Nyambayar in punches landed as he connected on 106 power punches to 78 total punches landed by Nyambayar. After 12 rounds, the judges’ scores confirmed Colbert’s dominance, as he won the decision with scores of 117-111 and 118-110 twice.

Hearn Not Buying Fury’s Retirement, Sees It as Publicity Stunt on Eve of Usyk-Joshua
Lipinets Replaces Broner As Figueroa’s Opponent In Showtime Main Event Saturday Night
Estrada vs. Cortes official for Sept. 3, Chocolatito next
Figueroa says Broner used mental health as excuse to quit fight, asks him to show proof
Joe Frazier vs. Sonny Liston: The Fight That Never Was