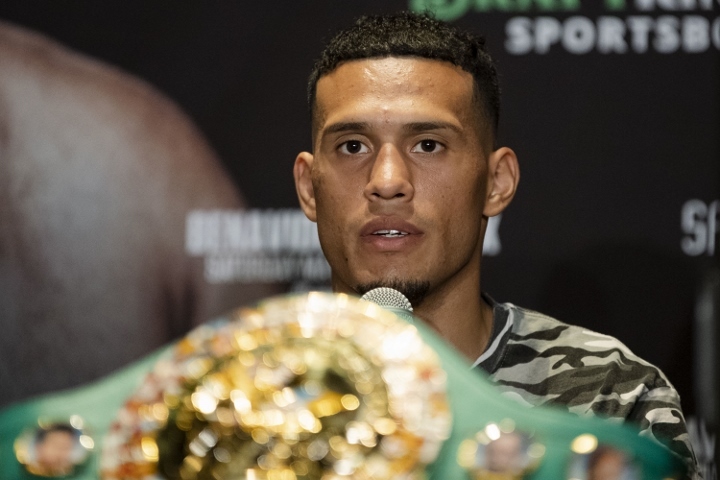 Benavidez (26-0, 23 KOs) beat and battered a gutsy Lemieux (43-5, 36 KOs) from the opening bell knocking him to the canvas for the fifth time in his career midway through the second round on a massive uppercut that nearly sent Lemieux through the ropes. Lemieux somehow survived the onslaught of Benavidez’s power punches and returned to action in the third round. But Benavidez went right to work dishing out more and more punishment as Lemieux’s corner stepped in and signaled surrender to referee Harvey Dock, who waved off the fight with 1:31 remaining in the third round.

“Mike Tyson gave me the name ‘The Mexican Monster’, what do you think I’m gonna do?” Benavidez told Jim Gray after the fight. “I just feel like I’m the strongest 168 pounder. No one can mess with me.”

Benavidez staggered Lemieux in the closing seconds of round one, the big blow a left hook that sent Lemieux into the ropes with Benavidez pouncing with a 10-punch combination of uppercuts, hooks and straight jabs. Dock later said he was about to stop the fight had the bell not rung to end the round.

“Lemieux is a special type of breed,” said Benavidez, who landed 49 percent of his total punches and 52 percent of his power punches. “This guy was swinging until the end. I had to be on my p’s and q’s. He’s a tough champion, so my hat’s off to him. He’s the only one with the guts to face me.”

Lemieux never backed down and told Gray he was impressed with Benavidez. “I’m good, Benavidez is a hell of a fighter,”

Lemieux said. “I congratulate him. After the first round I was okay, he had gotten me with some good shots. I tried to come back, but he’s a very good fighter.”

Benavidez said he wants the best the 168-pound division has to offer. “I’m waiting for [Caleb Plant, Jermall Charlo, David Morrell] to sign the contract. Them bitches know what’s up. I’m right here waiting for them. I’ll put myself up against everyone. I guarantee I’m knocking everyone out.

“I can get better everywhere. You can always learn. It only gets better from here. I’m just going to keep working. Facing tough guys like Lemieux just pushes me to keep moving to the next level.”

Chisora vs Pulev 2, Magsayo vs Vargas: Boxing TV schedule for July 7-9
Garcia: I still want Tank Davis after Fortuna, I’m not ducking anyone
Best of the Best: Boxing News named the top boxing publication by the BWAA
Joe Joyce and Susie Dent: The Masters of Mind Games | BT Sport
DAZN Exec Admonishes Promoters For Quarreling: We Don’t Want Our Brand Associated With That Kind of Behavior