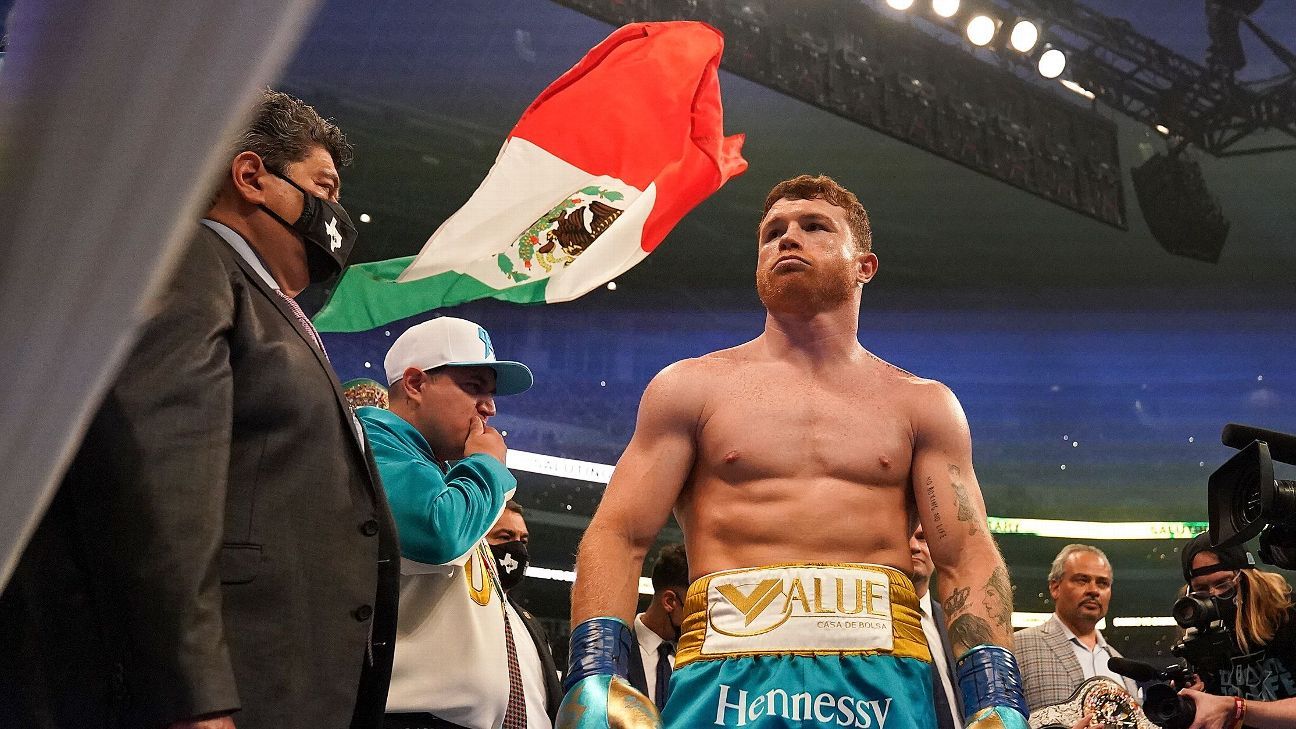 We’re at the midway point of the year, and while we unfortunately haven’t seen any of the top three heavyweights in the ring just yet, the trilogy battle between Tyson Fury and Deontay Wilder is right around the corner. That will be followed shortly by a compelling title tilt between Anthony Joshua and Oleksandr Usyk. And while a true heavyweight title unification fight might come together in short order, Joshua-Fury was tantalizingly close before legal action forced the division onto its current course.

What we did witness over the past six months was two fights from the face of boxing — Canelo Alvarez, a welcome sight in an era when the marquee names are rarely so active. Claressa Shields, already an undisputed two-division world champion, enjoyed both a world title fight victory in boxing and a successful pro debut in MMA.

We also saw four of the sport’s rising stars — Ryan Garcia, Devin Haney, Jaron Ennis and Vergil Ortiz — score victories in their first bouts against genuine competition. One of the brightest prospects in boxing, Xander Zayas, has been one of the most active fighters over the past six months, recording three victories and two knockouts in that span.

For every superb battle with real stakes, like Josh Taylor-Jose Ramirez and Oscar Valdez-Miguel Berchelt, novelty events with nothing on the line, like Floyd Mayweather-Logan Paul, brought in a lot of eyeballs and pay-per-view buys.

A strong start to the year has set the table for a promising finish to 2021, and a second half that kicks off with Fury-Wilder 3 will be punctuated by a scorching summer battle between the legendary Manny Pacquiao and Errol Spence Jr., with more to come.

While we wait for all of those tasty clashes, let’s take the time to highlight the best of what 2021 has delivered thus far, and hand out some well-earned awards.

It’s hard to look beyond Alvarez, who maintained his level of brilliance in his most recent fight, adding a third super middleweight world title to his waist by defeating Billy Joe Saunders. Saunders was a slippery southpaw with an unbeaten record, and arguably the best opponent Alvarez had faced at 168 pounds. But Alvarez’s accuracy was off the charts, including a devastating uppercut in the eighth round that disfigured Saunders’ face and left him with multiple fractures to an eye socket, forcing the English boxer’s corner to throw in the towel after the eighth.

Alvarez (56-1-2, 38 KOs), 30, from Guadalajara, Mexico, needs to be applauded not just for his consistency, accuracy of punches and quality of different combinations, but also for his refreshing stance of taking on the toughest challenges available. He is intent on unifying all the belts at super middleweight by the end of the year, with a full unification bout likely on the horizon against Caleb Plant. He is the biggest draw in boxing in 2021 after 73,126 turned out at AT&T Stadium in Arlington, Texas, for his win over Saunders.

In a frustrating six months for boxing fans, when big fights have fallen through while the trend of YouTubers, retired boxers and MMA crossovers fighting one another gained popularity, pound-for-pound No. 1 Alvarez remains a reliable figure for quality and entertainment. — Nick Parkinson

Claressa Shields tells Stephen A. Smith what she wants to accomplish both in boxing and MMA.

There’s a reason Shields calls herself the GWOAT (Greatest Woman of All Time), and carries such a strong following in her hometown of Flint, Michigan, which recently held a parade in her honor. Shields is at the top of the food chain in two divisions and currently sits No. 2 in ESPN’s women’s boxing pound-for-pound rankings.

Shields proved herself again by extending her pro record to 11-0 with her victory over Marie Eve Dicaire in March, making her the first boxer in the four-belt era (since 2004), male or female, to become an undisputed champion in two divisions. She immediately turned around, traveled down to JacksonWink MMA in Albuquerque, New Mexico, and began her first full MMA training camp.

The start of Shields’ pro MMA debut in the Professional Fighters League in June was tenuous, as her opponent, Brittney Elkin, had control early on. But Shields’ persistence and striking power allowed her to pull off a come-from-behind victory via third-round stoppage.

The two-time Olympic gold medalist and two-time undisputed boxing champion still has goals to accomplish in her original sport of choice, but a chance to make a major impact in a second sport is the stuff that legends are made of. — Eric Woodyard

These two future Boxing Hall of Famers first faced off in 2012 at 108 pounds. The fight was sensational, even if Gonzalez and Estrada were known only to hardcore boxing fans at the time. Nearly 10 years later, they finally met again, and somehow, the action was even fiercer, their skills even more finely tuned.

Nevermind that the rematch took place two weight classes above the initial bout, and the amount of wear and tear on both of the come-forward fighters over the past decade. Gonzalez and Estrada combined for more than 2,500 punches in what was easily the best fight of 2021. And this wasn’t just mindless slugging. No, this was inside fighting at the highest level.

The bout was especially memorable because it cemented one of the greatest comebacks in recent memory. Chocolatito was written off after his brutal knockout defeat to Srisaket Sor Rungvisai in 2017. He looked sensational against Kal Yafai in 2020, and this performance left no doubt that the former pound-for-pound king is still one of the best fighters in the world.

Gonzalez won the first meeting, and most fans (including myself) believed he deserved this decision, too — but Estrada earned the nod. This fall, they’ll meet again, and we’ll see if they can top themselves one more time. — Mike Coppinger

There have already been so many spectacular knockouts in 2021. Efe Ajagba’s eraser of Brian Howard. Gabriel Rosado’s perfectly timed counter-shot of Bektemir Melikuziev that put a sudden halt to the hot prospect’s quick ascent.

But none have come close to matching the pure savagery and the stakes of Oscar Valdez’s one-punch KO of Miguel Berchelt. Valdez gets bonus points because Berchelt was a decided favorite entering the contest as well.

For the greater part of nine rounds, Valdez seemed well on his way to a title in a second weight class. But he left no doubt when he quickly evaded Berchelt and sent his Mexican countryman, who slumped face-first to the canvas, unconscious.

The sequence was beautiful: Valdez slipped the right hand, then ducked under the left hook before unleashing the punch that changed the trajectory of his career and made him a two-division champion.

We have six more months, but fighters will be hard-pressed to author a knockout more savage than that one. — Coppinger

I am impressed by the skill, poise, maturity and development of Xander Zayas. The charismatic 18-year-old is mature beyond his years, inside and outside of the ring.

He started his 2021 campaign with a unanimous decision victory over James Martin inside the Top Rank bubble in Las Vegas — just the second fight of his pro career to go the distance. Two months later in Kissimmee, Florida, Zayas unleashed his power again with a first-round TKO over Demarcus Layton, which took less than a minute inside the ring.

Zayas pushed his record to 9-0 with seven knockouts in June, with a third-round TKO of Larry Fryers at Virgin Hotels Las Vegas, in his first fight in front of a crowd in a year and a half.

Zayas continues to sharpen his tools by sparring some of the best fighters in the game, including Gervonta Davis, Daniel Jacobs and Adrien Broner. A student of the game, Zayas is self-aware, receptive to advice and takes criticism well. Once the bell rings, he handles business by combining above-average boxing skills with explosive power. — Bernardo Osuna

Warrington surprised the boxing world when he handed back his IBF world featherweight title at the start of the year, hoping it would clear the way for him to face either Xu Can or Gary Russell Jr. at 126 pounds.

What was an even bigger surprise was when the Englishman — then ranked ESPN’s No. 1 featherweight — produced a pallid performance in what was supposed to be a routine, warm-up fight against unheralded Lara from Mexico, who had never boxed an elite-level fighter, in February.

Warrington (30-1, 7 KOs), 30, paid for a ponderous and weary approach in his first fight for 16 months, as he crashed to a ninth-round knockout defeat and the first setback of his career. The English boxer was floored in the fourth round (and nearly stopped) before Lara actually stopped him in the ninth round.

Warrington, who had looked so sharp in his previous title defense in October 2019 (a second-round win over Sofiane Takoucht), is now looking to rebuild his career, starting with a rematch against Lara (22-2, 15 KOs) in England this fall. — Parkinson

The biggest letdown boxing has seen in the past six months was the collapse in discussions in making boxing’s first-ever four-belt heavyweight world title fight this summer between Fury and Joshua.

It would have been the biggest fight of 2021, and now we are in danger of not getting it all.

The rival champions agreed in June 2020 to fight each other, and fans’ hopes of seeing the huge showdown were raised by progress in talks to stage the fight, despite challenges presented by the pandemic, which ruled it out from happening in the fighters’ native England.

Matchroom promoter Eddie Hearn, who promotes WBA-IBF-WBO champion Joshua, said in April that the fight was “100 percent happening,” with a date in late July or August in Saudi Arabia in the works. WBC king Fury’s co-promoter Bob Arum was just as confident — in January he said: “I’m 95 percent confident the fight happens.”

But those hopes suffered a knockout blow in May with the news that Deontay Wilder, who Fury stopped to win the WBC belt in February 2020, had won an arbitration case that claimed Fury owed the American a rematch next. It means we now have Fury-Wilder 3, a big fight, but not as big as Fury-Joshua, while Joshua must defend his belts against mandatory challenger Oleksandr Usyk next.

Both heavyweight title fights present big risks to the possibility of Fury-Joshua once again coming into play for late this year. Wilder is one of the biggest single punchers in boxing –perhaps the biggest. Usyk has had only two fights at heavyweight, but the Ukrainian is a master technician, who unified all four belts at cruiserweight and, like Joshua, is a gold medalist from the 2012 Olympics.

After being told we were getting Fury-Joshua for almost a year, to lose it this summer was a heavyweight blow to boxing’s schedule, already reduced due to the pandemic. Both champions will draw a lot of attention for their next title defenses, but Fury-Joshua would have been the sort of crossover event that boxing gets only every few years or more, attracting viewers from beyond the sport’s hardcore following. — Parkinson