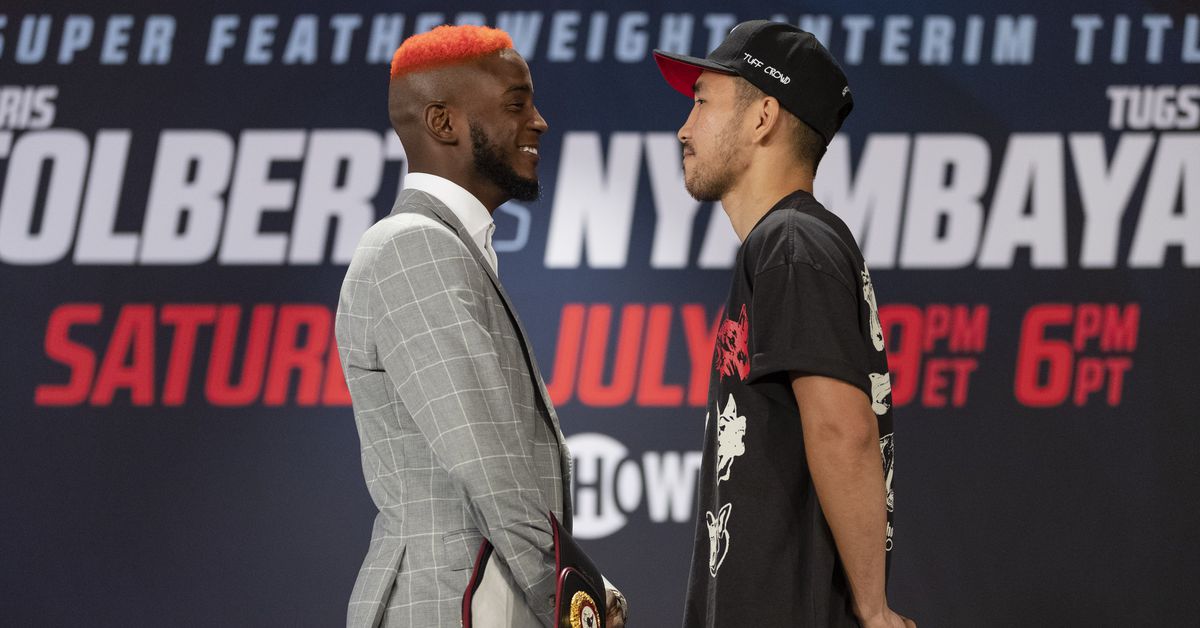 I would like to pick Tug here, because he’s a fighter I’ve enjoyed since he was winning silver for Mongolia at London 2012, and because it’s a good story if he wins — a guy taking a really good fight on about two weeks’ notice, and the opponent accepting a tougher matchup than he had originally.

But Tug’s inconsistency in fights makes it hard to go with him. We’ve seen it in each of his last three fights. Claudio Marrero hung around but Tug won, then Gary Russell Jr was too sharp for Tug’s lapses to overcome, then Tug let Cobia Breedy hang around and have an argument for a win. Colbert projects arrogance but doesn’t fight silly or dumb, once the bell rings he’s on, and he and his team are showing real confidence accepting this fight. I think Nyambayar can win this fight — if he has a consistent attack and doesn’t have the lulls we’ve seen him go through repeatedly now. But that’s asking Tug to be different than he’s been. Colbert can win this fight by doing what we’ve seen him do in his last couple wins. Gotta go with Colbert. Colbert UD-12

How to Watch Lomachenko vs Nakatani

I’ll be the first to admit I’ve underrated the skill set of Chris Colbert even though I’ve been aware of him ever since he was featured on a Netflix documentary some years back. Colbert actually has a pretty slick style which he’s both able to effectively lead and counter from. Going against a fighter like Nyambayar I think that’s going to be a big difference maker because despite Nyambayar packing a pretty good punch, Colbert is going to be a tough target for him. More than that I don’t think Nyambayar has the dynamic footwork to really confound Colbert or keep him from scoring for any real length of time. Unless Nyambayar is able to land a fight-ending shot I think Colbert should be able to pretty comfortably outpoint him while moving backwards to take a win on the cards. Colbert UD-12

I just don’t get Nyambayar. When “King Tug” pushes the pace and punishes the body, his combination of grit and technical acumen makes him a terror, but we’re now at three consecutive fights where he didn’t do that. While struggling to corral Gary Russell Jr isn’t an issue, it was bizarre to see him let Cobia Breedy back into the fight through sheer inactivity, and that’s unacceptable against a technician of Colbert’s caliber.

Two things have to happen for Nyambayar to win this: he has to actually fight to his strength and Colbert has to be as willing to chill against the ropes as he was against Jaime Arboleda, when he was seemingly trying to prove a point. If one or the other fails to materialize, Colbert’s too sharp for Nyambayar to play at being an outfighter. “Primetime” makes the most of his reach advantage, picking Nyambayar off at range to take a comfortable decision. Colbert UD-12

The Beltline: How should we treat fights involving boxers who have failed a drug test?
Jared Anderson: “I Would Love To Fight Daniel Dubois”
Fury says Joshua fight is off after deadline passes
Stevenson-Conceicao Fight Averaged 1,097,000 Viewers On ESPN, Peaked At 1,150,000
Wilder vs Helenius FIGHT PREVIEW: October 15, 2022 | PBC on FOX PPV