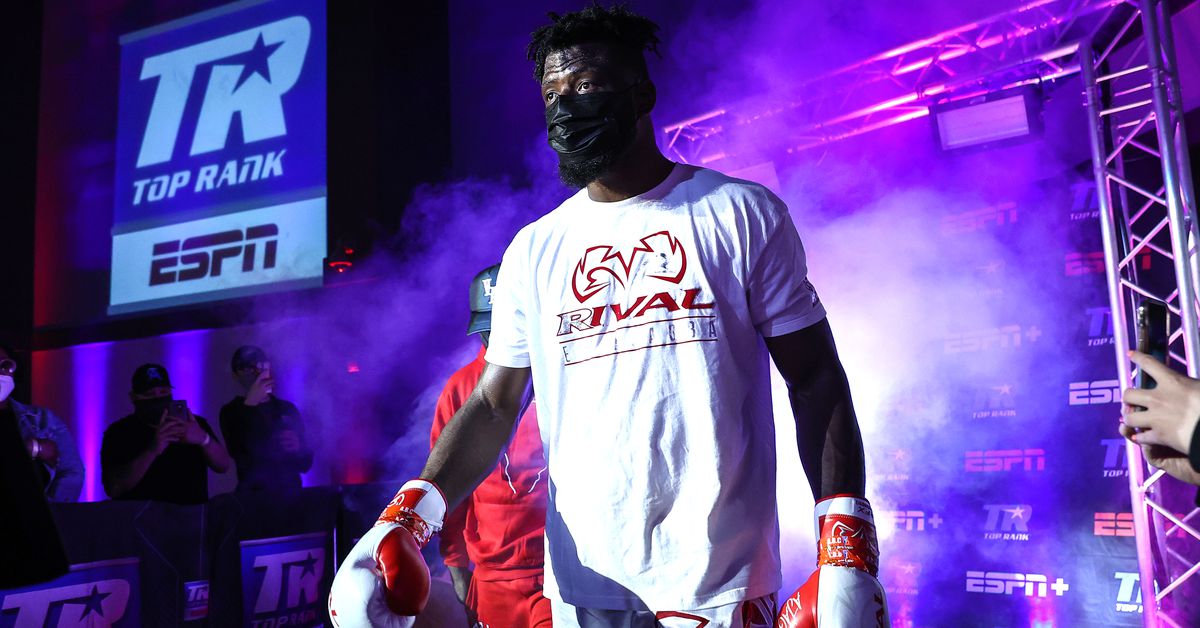 As revealed earlier this month, the July 24th Tyson Fury vs. Deontay Wilder 3 pay-per-view will feature a additional trio of heavyweight tussles, including a clash of unbeaten prospects, long-brewing rematch, and the latest from one of the most promising up-and-comers in the division.

The co-feature pits Top Rank product Efe Ajagba (15-0, 12 KO) against PBC’s Frank Sanchez (18-0, 13 KO). Ajagba, a former Olympian, recently bounced back from an uninspiring decision over Jonnie Rice with a Knockout of the Year candidate against Brian Howard, while Sanchez was last seen taking a weird technical decision over veteran Nagy Aguilera. There are questions about both men’s ceilings, but it’s a well-matched clash of heavyweights under 30, which you don’t see all that often.

“I am honored to be fighting on the Fury-Wilder III pay-per-view as the co-main event,” said Ajagba. “I have been patiently waiting for this opportunity to showcase my skills. My fans — and critics — can expect to see more jabs, head movement, footwork and power in both hands against Frank Sánchez. July 24 is going to be a special night for ‘The One and Only’ Efe Ajagba.”

“I am excited to make my case as the top heavyweight title contender on the best pay-per-view card of the year,” said Sánchez. “I look forward to fighting Efe Ajagba and coming out victorious. Boxing fans want to see the best fight the best. People say Efe Ajagba is avoided, and that’s exactly why I chose to fight him. Fans can expect a great fight between two undefeated heavyweights July 24.”

Earlier in the evening, Robert Helenius (30-3, 13 KO) and Adam Kownacki (20-1, 15 KO) finally run back their March 2020 battle, which saw Helenius batter the heavily-favored Brooklynite in four. Though ultimately overshadowed by the likes of Jeison Rosario vs. Julian Williams and Teofimo Lopez vs. Vasiliy Lomachenko when awards season rolled around, it remains one of the year’s biggest shockers.

“I’m looking forward to repeating my first performance against Kownacki on July 24,” said Helenius. “Boxing fans can expect another incredible fight with my hand raised in victory once again. All of Finland will be behind me when I show the world why I am most deserving of a world title fight. My only goal is to be world champion and unfortunately for Adam he stands in my way.”

“I’m very excited to be back in the ring,” said Kownacki. “The pandemic made things hard for everyone, but things are getting back to normal. Being a part of an all-heavyweight pay-per-view like this feels great, and it’s a great thing for fans of our sport.

This pay-per-view will be action-packed from top to bottom. I can’t wait to get my revenge against Robert Helenius. It’s been a long year waiting for the rematch, but I’ll be getting a victory on July 24. I feel like things will get back to normal and I will prove that I am one of the top heavyweights in the world.”

The opener pits surging 21-year-old Jared Anderson (9-0, 9 KO) against Russia’s Vladimir Tereshkin (22-0-1, 12 KO). Anderson was a terrific amateur and looks poised to become a terrific pro after numerous strong performances, most notably a beatdown of Kingsley Ibeh, while Tereshkin takes a step up in class after building a fluffy record.

Source: Cordina injures hand; Rakhimov fight off
Eubank Jr: Huge Amount Of Pressure On Me; If I Lose This Fight, I Retire
Fury v Joshua: Who Wins & How? 🤔 Carl Frampton, David Haye and Josh Denzel Discuss | Chatterbox
Charlo: Who has Crawford ever fought? Lubin would KO him
Ex-WBC champ Figueroa facing DWI charge