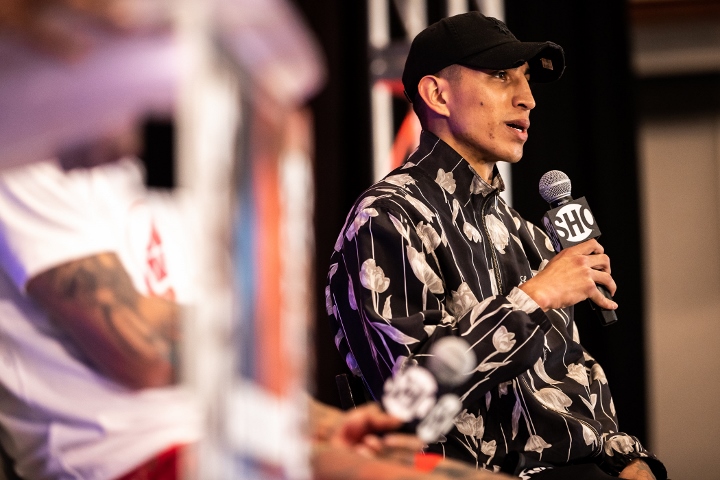 It was a slow start for Davis, who needed a few rounds to fully adjust to Barrios’ much bigger frame.

The fight began to change in the eight round, when a big right hook dropped Barrios. He got up and was dropped for a second time from a big left hand. Davis went for the finish, but Barrios managed to weather the storm until the round concluded. After taking the ninth round off, Davis began to land more hurtful punches in the tenth.

When the eleventh round began, Davis went right back to work as he was fully focused on securing a knockout. He connected with an uppercut to the body and Barrios went down in pain. Barrios was able to beat the count – with Davis going right after him with big punches. The contest was waved off when Barrios nearly went down for a fourth time and was visibly in pain.

Barrios made no excuses in the aftermath and gave high praise to Davis.

“I’ve never been a hater. Congrats to ‘Tank’,” said Barrios. “He came here and did his thing. It was nothing short of an exciting fight and that’s exactly what both of us predicted. He was the better man tonight, but I’ll definitely be back.

“’Tank’ is explosive. He caught me slipping and it’s boxing. At the end of the day, one punch can change the fight. That’s exactly what I felt happened. Congrats to him.”

How to watch Mayweather vs Asakura
Yesterday’s Heroes: A tribute to heavyweight Jack Hobbs
Fury says Joshua fight is off after deadline passes
Stevenson Lays A Beating On Conceicao
Shakur Stevenson Misses Weight, Forfeits His Championship Belts On Eve Of Scheduled Title Fight With Robson Conceicao