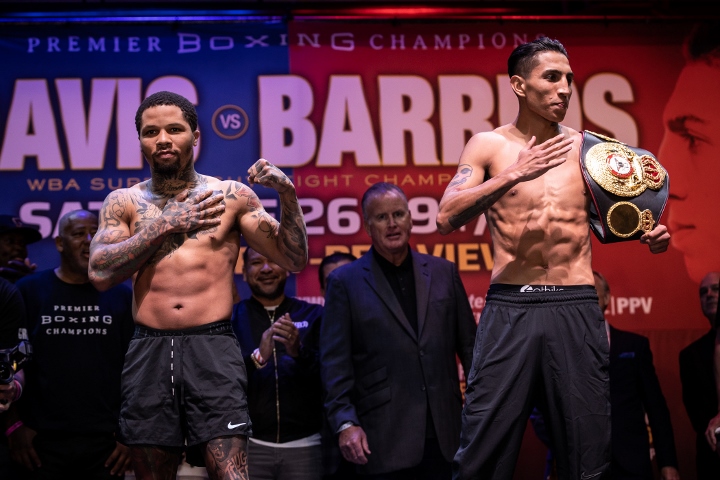 Gervonta Davis is expecting his next fight to go a lot like the night he first fought for a major title.

Davis (24-0, 23KOs) fought for a secondary lightweight title during his previous visit to the venue, a 12th round knockout of Yuriokis Gamboa in December 2019. The 26-year-old southpaw has since dropped back down in weight to reclaim his WBA “Super” 130-pound title in a sensational 6th round knockout of Leo Santa Cruz last Halloween before deciding to test the junior welterweight for his ninth straight fight with a title at stake.

The first fight of that run came in a 7th round stoppage of then-unbeaten Jose Pedraza in January 2017 at Barclays Center in Brooklyn, New York. It remains. Davis’ most complete performance to date, prompted to show several facets of his game in order to trump the supremely gifted Puerto Rican boxer.

“Maybe Barrios can be the one to show the people I really have skills. Maybe it can be another knockout. We don’t know. It’s another one where we’re working hard so we can give them a great performance. That’s what the fans want, an exciting fight and that’s what we’re going to give them on June 26.”

Davis enters the fight riding a 15-fight win streak, having been to the scorecards just once in his career. That moment came in a six-round shutout win over German Meraz, where he scored two knockdowns along the way in their October 2014 contest. Davis has since discovered a variety of ways to brutalize his opponents, having blasted out foes in under a minute all the way to going into the 12th round in order to close the show as was the case the last time he fought in his second hometown of Atlanta.

As was the case that night, a capacity crowd is expected to be on hand. Davis struggled at times in his previous Atlanta appearance but understands the responsibility that comes with being a PPV headliner and box-office attraction.

“It actually makes me work harder,” insists Davis. “There will be a big crowd out there. We know Barrios is coming to fight. We’re working as a team and family, keeping our head on straight and focusing on the goal. That’s to put on a great performance for the fans out there.”

Christian Carto To Face Hector Sosa in Main Slot at 2300 Arena
Luis Nery Now Faces David Carmona On October 1 in Tijuana; Eyes Title Fight With Stephen Fulton
Panel: How will Joe Joyce fare against the very best heavyweights in the world?
Harper def. Rankin for WBA jr. middleweight title
Jake Paul Eager For ‘Real Fight’ With Mayweather: ‘I Want to Say I Got Your 0’