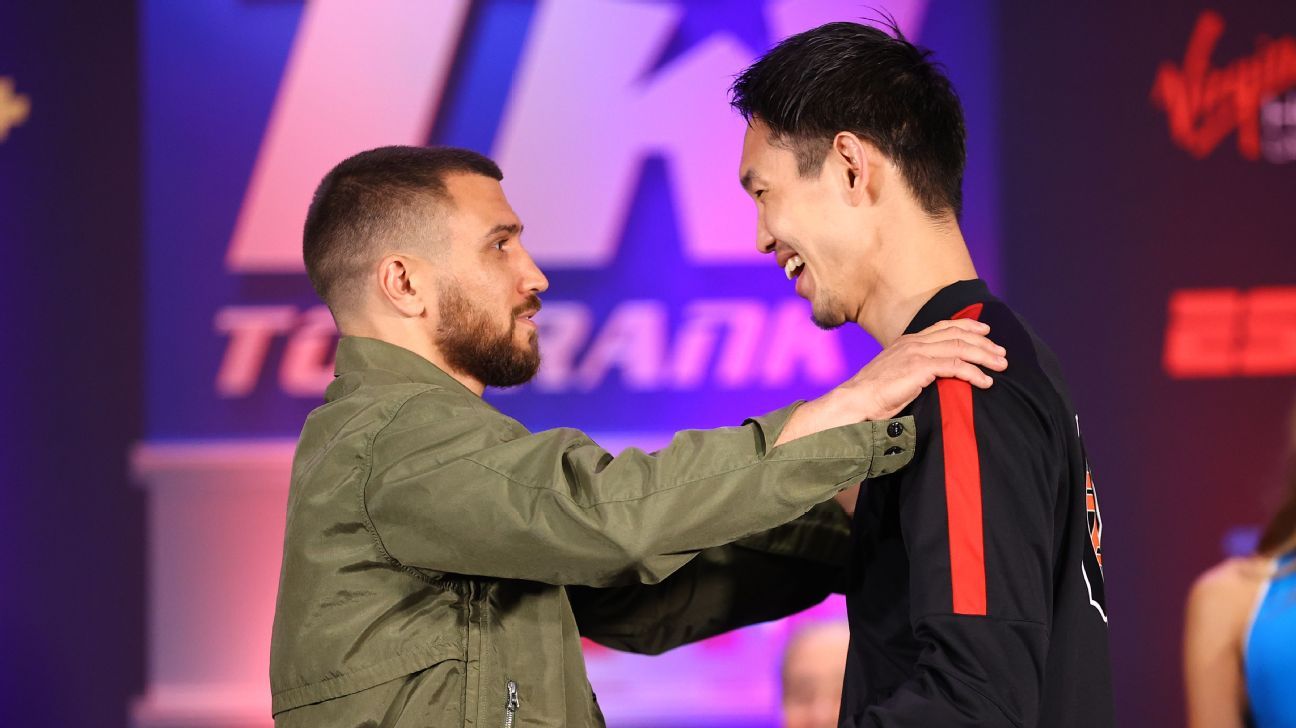 LAS VEGAS — One fight can change a lot in boxing, a sport in which it’s not uncommon to fight only twice a year. In the case of Vasiliy Lomachenko, even six rounds can change a lot.

Seven months ago, Lomachenko (14-2, 10 KOs) was a unified lightweight champion and a universal staple of boxing’s pound-for-pound lists. This weekend, as he prepares to face Masayoshi Nakatani (19-1, 13 KOs) in a fight without a single belt on the line in Las Vegas, he faces questions of whether he’s still the same at age 33.

If there were — by some impossible miracle — a four-man tournament to determine the best lightweight in the world tomorrow, it’s conceivable that Lomachenko wouldn’t even get an invite. Such is the ground he recently lost on his undefeated counterparts Teofimo Lopez, Gervonta Davis, Ryan Garcia and Devin Haney.

Lomachenko, of Ukraine, lost his stature in the division back in October at the hands of the 23-year-old Lopez — but as is often the case in boxing, there is fine print in the result. Lopez (16-0, 12 KOs) won the bout fair and square, but the first six rounds were puzzling, to say the least.

In the aftermath of Lopez’s win, which has propelled him into a lucrative payday against George Kambosos Jr. with the promotion Triller now tentatively scheduled for Aug. 14, Lomachenko’s team revealed that the fighter went into the contest with an injured shoulder — the culprit behind his curiously low punch count early on. Not surprisingly, Lopez dismissed that explanation as posturing and has basically said he will never grant Lomachenko a rematch because the former champion didn’t give him enough respect before their first encounter.

It all amounts to a lot on the line for Lomachenko on Saturday. If he is impressive against Nakatani, it sets the stage for a Lopez rematch. A second fight between them would be massive for both, as well as for Top Rank. Lomachenko’s injured shoulder casts doubt on the first result. However, a thorn in the side of that narrative is that when the chips were down and the result was in question going into the 12th round, it was Lopez who rose to the occasion and put an exclamation point on his win.

A second fight would carry drama, history and a real impact on any future negotiations with the other big names at lightweight. But in order to secure any of that, Lomachenko has to go out Saturday and prove he’s still Loma. If he doesn’t do that, his account of what happened in October will sound more like an excuse than an explanation. — Okamoto

What can Lomachenko get out of fighting Nakatani?

Vasiliy Lomachenko returns to the ring for the first time since losing his lightweight world title unification fight to Teofimo Lopez in October 2020. He seems intent on steamrolling his way back to a rematch with Lopez, even if Lopez has stated his lack of interest in such a fight.

So what can Lomachenko expect against Masayoshi Nakatani? And can he find a way to make Lopez change his mind about a rematch?

Read Timothy Bradley’s full breakdown of Lomachenko-Nakatani, the prospects for Lomachenko’s future and his prediction for the fight here.

Gervonta Davis was going through the motions during an interview in May when a phrase caught his attention.

Davis is one of boxing’s young and rising stars around the lightweight division. When it was suggested that he didn’t have the top accomplishment among the group of impressive young 135-pounders that includes Teofimo Lopez, Ryan Garcia and Devin Haney, Davis stopped looking down, picked his head up and interjected.

“I’m the top [feature] of that group,” Davis told ESPN. “They’re in their own little group. I sit alone.”

You can read the full story on Davis from Ben Baby here.

Entering the biggest fight of his career, Mario Barrios doesn’t have a prediction.

The undefeated WBC junior welterweight titleholder certainly envisions himself being successful against the hard-hitting Gervonta “Tank” Davis, but he’s unsure of how exactly it will play out on Saturday in Atlanta.

“I know both of us are going in there with bad intentions,” Barrios told ESPN. “We know he’s explosive. I only have one fight at 140 that has gone the full distance, and even in that one fight I put my opponent on the canvas twice, and I’m just as dangerous of a puncher as he is.”

Davis (24-0, 23 KOs) delivered a vicious uppercut knockout over Leo Santa Cruz in his last bout in October, but this next step could be his biggest challenge.

“I want to spoil the plans 100 percent,” Barrios said. “At the end of the day, he’s in there fighting for what’s mine, for what I have worked so hard for, and he has a very difficult task in front of him when it comes to facing me. That’s why I’m doing whatever I can to make sure I’m prepared. He’s doing the same, which is why there is no way to give a prediction with this fight. I just know it’s gonna be fireworks.” — Woodyard