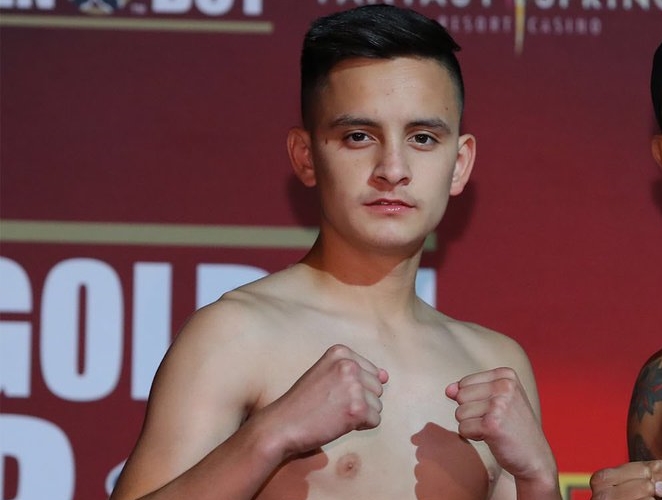 Ricardo Sandoval has come a long way since the days of fighting in dimly-lit and half-filled venues in Mexico.

Despite the uncertainty of where his career was headed early on in his career, Sandoval now has the backing of a major promoter and is on the cusp of becoming one of the top flyweights in boxing today.

Sandoval (18-1, 13 knockouts), who resides in Rialto, California, made his pro debut at the age of 17 five years ago this month. He fought 10 of his first 12 fights in Mexico, mostly fighting on club shows at gyms, restaurants and night clubs. He suffered his only loss of his pro career in his fifth fight at the hands of Alonso Ceja by majority decision in November 2016.

After fighting and winning on two fight cards in 2017 and 2018 that were promoted by brothers Tommy and Terry Lane, Sandoval caught the eye of Golden Boy Promotions. On his first card under the Golden Boy banner in July 2019, Sandoval overcame two knockdowns to knock out Marco Sustaita of Mexico in round 5.

The 22-year-old will take a step-up in opposition against Harris (18-1, 9 KOs), who resides in Swansea, Wales. The 30-year-old challenged WBC flyweight titleholder Julio Cesar Martinez on February 29 of last year, losing by unanimous decision in a fight that saw him get knocked down in round 10.

In his last bout on October 18, the 30-year-old Harris defeated Marcel Braithwaite by unanimous decision.

Sandoval has fought opposition in their respective hometowns early on in his career, but is the underdog going into Friday’s bout as Harris has faced the better opposition between the two. Robert Diaz, who is the matchmaker for Golden Boy and is in Bolton, believes Sandoval can get the job done and come out victorious.

“He is a very talented and dedicated young man,” Diaz told BoxingScene Wednesday morning. “I like him in and out of the ring. Friday is a very important fight in his career. Harris has home turf (and) has experience, but I love Sandoval’s demeanor. (I) believe that once in the ring, (Sandoval’s) talent, work rate, determination will overcome all obstacles.”

Sandoval has shown more power and aggression in recent fight, having stopped his last five opponents.

Francisco A. Salazar has written for BoxingScene since September of 2012 and has covered boxing in Southern California and abroad since 2000. Francisco also covers boxing for the Ventura County (Calif.) Star newspaper. He can be reached by email at santio89@yahoo.com or on Twitter at FSalazarBoxing.