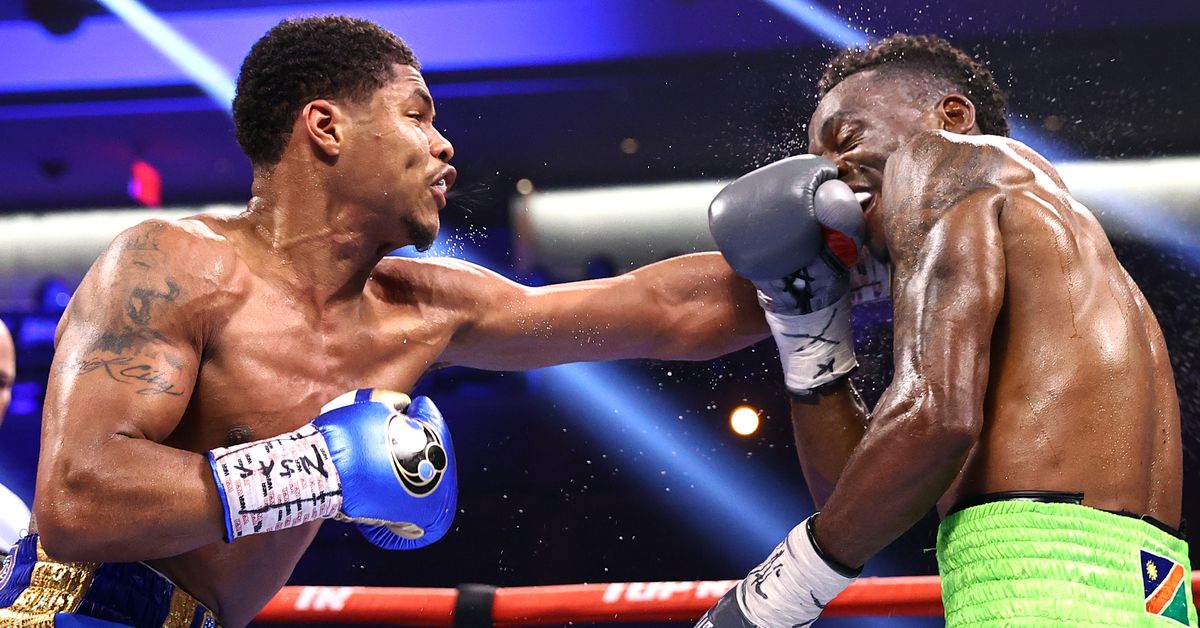 Shakur Stevenson’s fight on Saturday night stunk. Even he knows it. His shutout win over Jeremiah Nakathila was easy work for him, really, and the most positive spin you can put on it as watchable television is that Stevenson seemed to respect Nakathila’s power. Maybe he knew Nakathila had nothing but power, but then we get into a whole discussion that drags on.

And as I’ve said a couple times now, I don’t think it’s worth all that much digital ink. It was a boring fight nobody will really remember if Stevenson, 23, becomes what he’s supposed to become. The fights we’ll really judge Shakur’s career and talent and entertainment value on are still to come in his career.

When the extremely homeriffic, hype-driven ESPN commentary team end a show by basically saying, “Hey, please come back next week to watch Naoya Inoue, it won’t be as boring as this, we promise,” it’s pretty bad.

Shakur’s young, obviously. But like Devin Haney, it’s a double-edged sword being so heavily, aggressively promoted at a young age. Your name gets out there, of course, but if you’re worth promoting at that level, fans naturally want to see you fight top opponents, not take baby steps in fights where you’re favored at -1000 or -3000. Fom a managerial standpoint — and even a career development standpoint — that might be the smart thing to do, but excessive promotion leads to that thinking.

And it should. Stevenson is not being promoted as a top prospect — that would be different. Instead, they’re occasionally trying to already call him a pound-for-pound guy. Shakur Stevenson’s best win is Joet Gonzalez or Christopher Diaz. He is not pound-for-pound yet.

The two big in-house options are both titleholders at 130. Oscar Valdez has the WBC belt, Jamel Herring the WBO belt. We’ll get to Valdez in a moment, but let’s start with Herring, who was in attendance last night.

Herring joined Bernardo Osuna shortly after to give his own take, saying he felt Stevenson could have done more with Nakathila — “Shakur definitely has the talent and the skill,” he said — but that he played it a little too safe.

And he also doesn’t mind any of Stevenson’s dismissive banter.

“I don’t take anything personally. I’m mature. I’ve been through enough, I’ve been through a lot in my lifetime,” Herring said. “This is what I love to do, I love the fight game, I love what I do for a living. That’s just boxing talk to me. The fists do the talking at the end of the day. I’m not really here to down nobody or go back-and-forth with nobody, I’m just here to live out my dream.”

It’s worth noting Herring (23-2, 11 KO) definitely didn’t flat-out say he will fight Stevenson next, or that he wants to — but the WBO is going to force his hand there, probably, one way or another. Stevenson (16-0, 8 KO) has been No. 1 contender for a bit, and his win last night gave him the interim title. There has been a contract out there that states Herring has to fight the Stevenson-Nakathila winner.

That said, boxing contracts, especially drawn up by a sanctioning body, don’t always mean everything. And probably even more relevant, the 35-year-old Herring has talked about possibly going back up to 135. With Teofimo Lopez re-upping with Top Rank and having a tentative October date on ESPN PPV, Jamel could be a solid option for Lopez’s opponent. Top Rank would like to do Lopez-Lomachenko 2, but if that can’t get done, Herring’s as good (and easy) an option as anyone who will be realistically available. The risk-reward of fighting Teofimo may appeal to Herring more than it does with Stevenson.

I like Jamel Herring. A lot. I think he’s a credit to boxing and an admirable fighter who has maximized good if not exceptional ability to become a top player in a good weight class. But I still don’t hear Jamel Herring saying he wants to fight Shakur Stevenson. If anything, it’s the opposite.

Sometimes, even when you really like a fighter, you have to see things for what they are, or at the very least how they’re being presented to you as best you can see.

On that note, Oscar Valdez avoided fighting Stevenson at featherweight, when Valdez held the WBO title and Shakur was his mandatory challenger. He popped up to 130, and it’s turned out very well. His February win over Miguel Berchelt made him the top dog at the weight.

Stevenson still wants Valdez, and Valdez has paid lip service to the idea, too. Herring also wants Valdez. But the fact is it looks like Valdez will be defending his WBC belt against Robson Conceicao next. Neither Stevenson nor Herring will be getting the Mexican star in the ring right away.

I am not saying Valdez or Herring are “scared of” Stevenson, I think that oversimplifies it. I do think both see a very difficult fight against a talented fighter with a lot of skills and gifts. Whatever we might think of Stevenson as entertainment, boxers see how good he is, how hard he’s going to be to beat. To simplify that some: I don’t think either of them want anything to do with him if the money isn’t really big.

But eventually, someone has to fight him. With the interim WBO belt, Stevenson would be bumped up to full title status if Herring vacates to move up to 135. He would then have something for others to chase, so let’s look at the WBO rankings as of their last update.

Ogawa is going to fight Shavkat Rakhimov for the vacant IBF belt, so forget him. Roach just got a shot against Herring in 2019, but that doesn’t mean he might not get another.

Nova and Bell are both Top Rank guys, but neither are big fights. Sharp is a Queensberry guy, could easily be brought over, also not a big fight. Yaqubov’s a good prospect, not a big fight. Uranov and Noynay not big fights. All of them would be sizable underdogs against Stevenson.

As far as unification, the IBF is vacant, as mentioned, at least for a couple more months. Valdez has the WBC, Gervonta Davis has the WBA and until proven otherwise, he shouldn’t be expected to fight anyone outside of the PBC ranks. Gervonta is also fighting at 140 next time out, so there’s that, too.

The wild card option is for Stevenson to keep going up in weight to chase big fights. He could jump to 135 himself. Arum has talked about doing Teofimo Lopez vs Shakur Stevenson quicker than some might expect, by the end of 2021. Maybe. But that might be foolish, and if Stevenson’s management has been anything so far, it’s been smart and safe.

Shakur needs something to test him, though. In part because he’s building a bad reputation with viewers, and let’s not discount the idea that having easy win after easy win might make him stagnate in his development.

Maybe Jamel Herring will sign the fight soon and this will all be wasted time. That’d be great, it’s a good fight. If he doesn’t, the outlook isn’t great as far as Stevenson getting a fight that’s going to intrigue next time out.