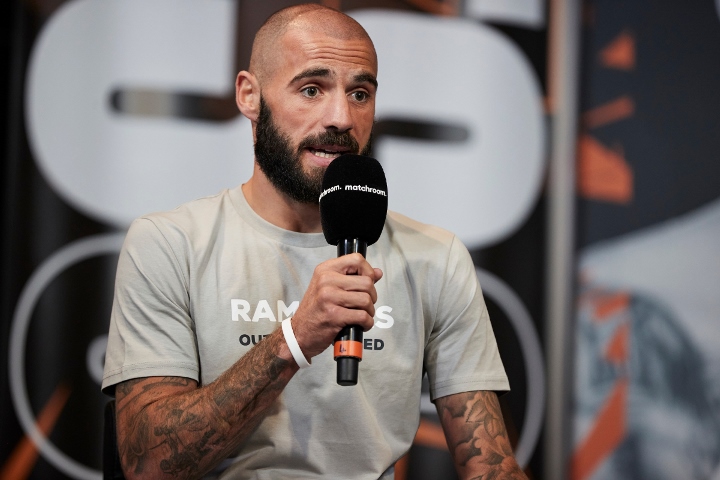 Brutal honesty is what Lewis Ritson promises and that is what he gives. The former British lightweight champion has a final eliminator to earn the right to face Josh Taylor on Saturday. But ask if he would ideally fight the undisputed super-lightweight champion and the answer is ‘no’.

Ritson faces Jeremias Nicolas Ponce, of Argentina, in Newcastle on Saturday in a final eliminator for the IBF super-lightweight title, which Taylor holds along with all the other belts following his win over Jose Ramirez in Las Vegas in May.

Taylor lives a mere 90 miles from Ritson, so a clash between the pair could be almost classed as a local derby, albeit one between Scotland and England. But if given the choice between Taylor for all the belts or an easier fight for a vacant title, Ritson seems to know his limits.

“I’m knocking on his door, but I just hope that he moves up so I can get a vacant belt,” Ritson said. “He is a special fighter and he has done great. But I will fight him if I have to.”

Ritson knows Taylor well and they have sparred many times together, most recently last year, ahead of Ritson’s fight with Miguel Vazquez and Taylor’s defense against the previous IBF mandatory Apinun Khongsong.

“We did ten rounds on the Wednesday and eight rounds on the Friday,” Riston said. “The sparring went well, don’t get me wrong. But sparring is different to fighting. He is one who can up his game more in the fight than during the spar.

“If someone had asked after the spar if I would fight Josh Taylor, I would say ‘yes, absolutely’. But you watch him fight and think ‘I’ll keep away from him’. I hope he moves up and does fight Terence Crawford.”

At 27, Ritson is on a four-fight winning streak, although he admits he is lucky to be there after what he says was “a gift” against Vazquez in a behind-close-doors fight last October.

“We had prepared for Vazquez based on his fight with O’Hara [Davies], when he was on the front foot coming forward,” Ritson said. “We were absolutely convinced that is what he was going to do.

“So, all the sparring we had was people who stood there and I had a fight with, I had no backfoot sparring at all. After three or four rounds, I realized he wasn’t coming forward at all.

“If the crowd and been there screaming and shouting I might have thought I need to step on the gas. But there was none of that. Really, halfway through the fight we should have changed tactics and waited for him. But you live and learn. We were very, very lucky we got the nod. I got a bit of a gift but that is just the way boxing is sometimes.”

Since that fight, Ritson has split with his trainer Nel Fannan, and went back to be trained by his father, Dave, but he says he is yet to watch the fight since.

“I will never, ever watch that back,” Ritson said. “I went to my Dad’s house a few days later and I said’ have you watched the fight? What did you think?’

“And he said ‘I can give it to you the nice way or the hard way.’

“I said ‘give it to me the hard way, I have had so much stick on Twitter’.

“He said ‘look son, you didn’t win that fight, but somehow you got it. Now we are going to get in the gym and make sure that doesn’t happen again’. That’s the plan.”

In Ponce, he says he has prepared again for another come-forward fighter and this time he is expecting the Argentinian to stay doing what he has done before.

“I’ve seen quite a few of his fights and I think he can only do one thing, which is come forward,” Ritson said. “Every fight I have seen he has done the same thing, so hopefully he can’t do what Vazquez did – I will struggling again.

“But I have read a few interviews where he is said his is confident of stopping me before the ninth round, so I think he is going to come and have a go and that is what we are going to do, so it is going to be an exciting fight.”