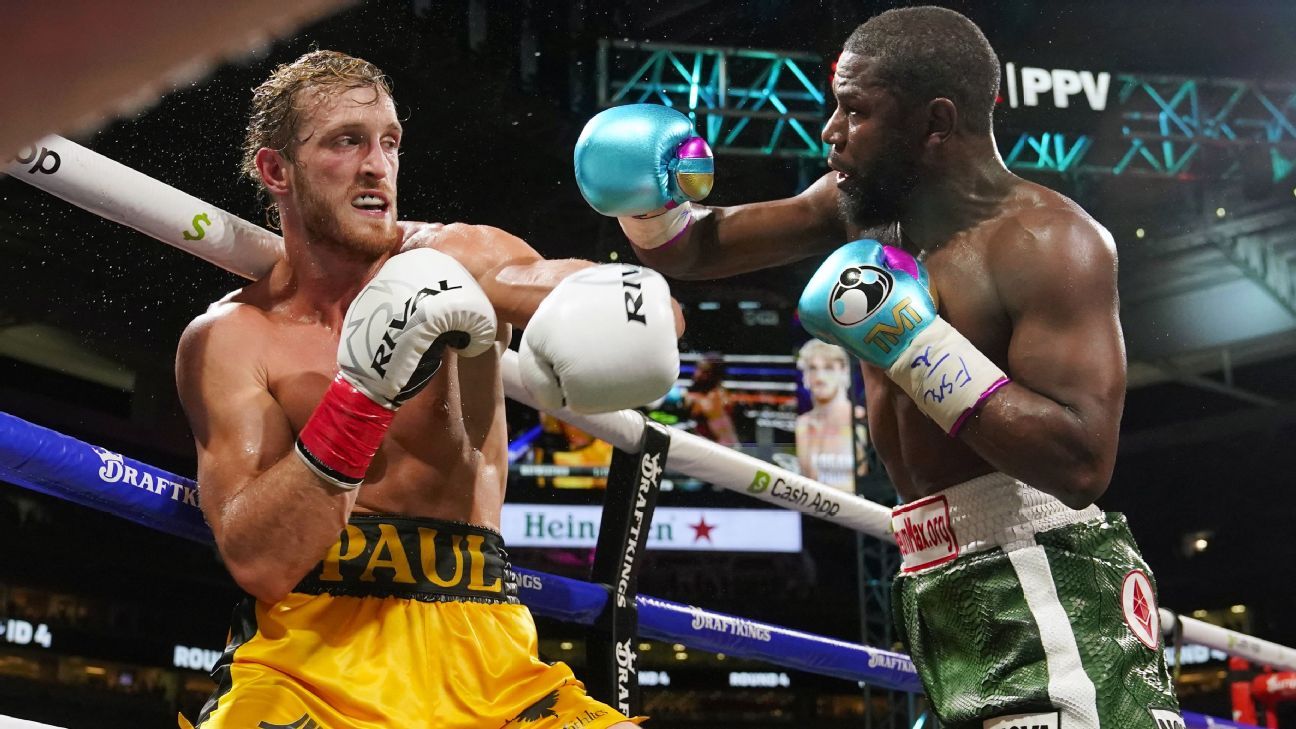 MIAMI GARDENS, Florida — Logan Paul raised his right glove and pointed to the sky. He then made a face at Floyd Mayweather, taunting him. And then flicked out a jab.

It was a surreal moment in a surreal buildup and fight.

YouTube star-turned-prizefighter Logan Paul went the distance with Floyd Mayweather — all eight rounds — on Sunday night in an entertaining exhibition boxing match at Hard Rock Stadium in Miami. Paul’s coach, Milton Lacroix, told ESPN last month that success in this fight for Paul would be going the whole way. And that’s what Paul did.

“He’s better than I thought he was,” Mayweather said of Paul. “… I was surprised by him tonight. Good work. Good little guy.”

The exhibition was scheduled for eight three-minute rounds. Mayweather and Paul wore 10-ounce gloves. There were no judges and no official winner read, though knockouts were legal.

The Florida State Boxing Commission did not officially sanction the fight — due to the large disparity in size and experience level — though it provided Samuel Burgos as the referee. The bout, which will not go on either man’s professional record, was promoted by Mayweather Promotions and distributed by Showtime pay-per-view.

“I don’t want anyone to tell me anything is impossible ever again,” Paul said. “The fact that I’m in here with one of the best boxers of all times proves the odds can be beat.”

ESPN scored the bout 78-74 for Mayweather. He landed 43 total punches to Paul’s 28, per CompuBox. Of those 43 punches for Mayweather, 36 were power shots. Paul landed 21 power shots. Mayweather landed 17 shots to the body compared to just one body shot for Paul.

Paul could not weigh more than 190 pounds for the bout and came in Friday at 189.5 pounds. Mayweather weighed 155 pounds.

After a relatively uneventful first round, Paul had probably his best round in the second, landing a clean right hand. Mayweather started to open up a bit in the third round with several hard right hands and a big left hook. The fourth and fifth were more of the same, with Mayweather landing single hard shots and a few combinations and Paul hanging in despite the damage taken.

Paul started to tire in the sixth, but Mayweather did not completely capitalize. There was a lot of clinching in the seventh and eighth, with Paul using his much bigger size to neutralize Mayweather’s speed.

Mayweather said his goal for the fight was to give people a show, while Paul was “fighting to survive.”

“When the money comes, we’ll see who is the real winner,” he said. “At the end of the day, I’m going into the Hall of Fame for boxing. I have nothing to prove.”

Mayweather, who has been retired since a 2017 fight against UFC superstar Conor McGregor, was 50-0 as a pro, while Paul was 0-1. Paul lost his pro debut to fellow YouTube star KSI in 2019.

Mayweather vs. Paul was billed as “Bragging Rights,” essentially a chance for Mayweather to showcase his level of boxing against Paul, a social media star who has branched out into boxing along with his brother Jake. Mayweather said earlier in the week that he is retired from boxing, but not retired from entertainment.

The bout was clearly a spectacle, a chance to attract Paul’s younger Generation Z fan base to a bout with Mayweather, the biggest pay-per-view draw in the history of boxing.

Mayweather said “probably not” when asked if he’d do another exhibition match. Regarding the possibility of coming out of retirement for an officially sanctioned pro fight, Mayweather was even more clear.

“Absolutely not,” he said.

Paul admitted he didn’t have anything to lose in this bout as a relative novice in boxing going up against an all-time great. Despite that, Paul said that he believed he would beat Mayweather and it would be the biggest upset in the history of combat sports.

“I don’t know what to make of it,” said Paul, who called the fight the best moment of his life. “I can’t comprehend it.”

From Mayweather’s perspective, he has always fancied himself as the best businessman in boxing history, and a bout with a wildly popular neophyte in Paul likely made both fighters millions of dollars.

Mayweather also did an exhibition match against then-20-year-old Japanese kickboxing standout Tenshin Nasukawa in December 2018. Mayweather knocked down Nasukawa three times in the first round, forcing Nasukawa’s corner to throw in the towel.