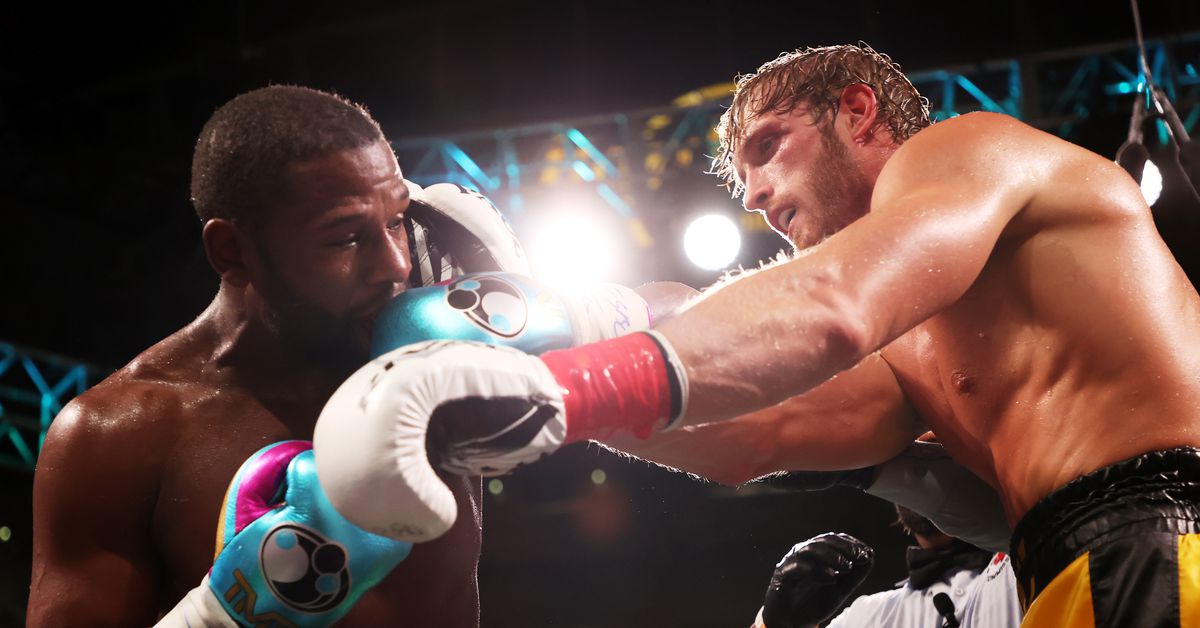 It’s the day after, and I’m still processing that Floyd Mayweather vs Logan Paul exhibition, which ended in a way which pleased almost nobody but the Paul family and anyone who bet the contest to go the distance.

I shouldn’t be, probably, because after all, it was “just” an exhibition, and should be seen as an “it is what it is” deal — something to be consumed, if desired, and then forgotten. I should be moving on to other stories, but I can’t let it go just yet.

That Floyd Mayweather fight with Logan Paul didn’t go as most of us expected, and I’m still trying to figure out why. Specifically, I am scratching my head and trying to decipher why Mayweather didn’t do the expected — and what 99% of people watching figured they would see — and knock Logan the F out.

To help see it from hopefully all the angles, I put the query out to the world, or the part of the world that is on Twitter. I asked pro boxers to give me their two cents on the matter.

“He’s old, bro, look how his body looked fight night, he didn’t train,” said Smith. “He’s been off too long. And that fighting instinct is long gone, bro. When we retire that ability to get up for big fights anymore leaves us. Thus why I’m only interested in bare knuckle.”

If you saw some of Floyd’s post-fight presser, it was clear to me that Floyd wanted to stop Logan, and that this event didn’t go the way he planned in his head. That’s not to say that there isn’t the possibility that it did go the way he wanted, and that Logan going the distance was Plan A, in terms of a longer-term plan apart from the single exhibition. When Showtime signed Jake Paul last month, you had to think, OK, a storyline is being built, Jake will fight Floyd next, in the mode of avenging sibling.

I told Smith that during the fight Sunday, I saw Logan slipping Floyd’s punches a few times, and realized that Floyd was loading up, and trying to land thumpers. But Logan’s athleticism and instincts and time spent training with Milton Lacroix had paid dividends. He could move his feet and head, then clinch/grapple/hold Floyd effectively enough to allow himself to go eight rounds.

But man, I didn’t think it would matter, and I am pretty sure Floyd didn’t either. In retrospect, I had the feeling that just maybe Floyd was looking back at that presser, and wishing he had taken this a bit more seriously. Even if you are a GOAT contender, don’t expect to come waltzing in and finish off a relative newbie, one who is 40 lbs heavier than you.

“Maya Angelou said it best: When people show you who they are, believe them,” Ishe continued. “When Floyd tells you he’s robbing the bank what the hell did they think, he was joking? And Logan was so big, as well. That played a part, and the fact he doesn’t know how to fight did as well. Grabbing, weird ass punches, it would have been better to see Floyd with a former boxer. Logan’s grabbing tactics were smart. Either brother fights a seasoned pro or a former pro, they both go to sleep!”

Tureano Johnson, the middleweight from the Bahamas, told me that he didn’t watch the whole thing.

“I didn’t watch the show as I don’t support, endorse, or encourage robbery,” Tureano told me. “The whole make up was a scam. Through Floyd Mayweather, boxing is now a circus act, a joke, a complete embarrassment. His thing with the Japanese kid who never boxed. Now a YouTube boxer wannabe. Floyd’s legacy is this: He destroyed boxing.”

Strong take. I don’t go that far. Floyd’s profile rose to where it did partly because other young guns didn’t step up and take over. Canelo Alvarez in the last two years has done that, but apart from that, there’s been too much talking and not enough action from the young fighters, and that’s why we are spending any time at all watching and then dissecting a Mayweather exhibition.

I did find myself wondering about “legacy” as I listened to Floyd’s post-fight presser. I will admit that I didn’t watch the whole thing, because I wasn’t in the mood to hear Floyd’s “greatest hits” about leaving Top Rank, having that majestic investment portfolio, etc. I also noted, with maybe some bemusement, that Mayweather was fixated on making excuses for his showing.

One, two, three times, again and again, he repeated how Logan Paul held him too much, and that he came from a wrestling background. That, more than anything, told me that no, this was not the plan. Floyd wanted to stop Logan, I think. Because going the distance would benefit him how, again? Making extra money by betting on himself to go the distance? Would there be enough of a pile there to justify the scorn he’d take on when he didn’t stop the 0-1 guy?

And if you believe that there was a plan, to make this a two-fer and have Floyd fight Jake Paul later this year, then how would Floyd looking 44 years old and being unable to stop the 0-1 guy help advance that plan? Hey, stranger things have happened, maybe Floyd in a month admits that not stopping the YouTuber got under his skin, and he’s coming back, to train harder and take out his frustration on Jake Paul?

My friend Shawn Cameron fought as a junior middleweight from 2012-2017.

“Woodsy, I don’t think anyone with a brain thought that Floyd would stop him,” he told me. “There was a huge size discrepancy, and they only went eight.”

Well, I know that I have a solid half a brain, so I will work on beefing up the second half! But seriously, I guess I under-estimated the import of the size discrepancy. Here’s the thing, though. When a seasoned pro, even at 44, meets a person with a single pro fight, then the experience gap should be far, far more important than a weight “edge.”

And I hold to that, but what I just didn’t factor in is the Mayweather methods of operation: He tended to flurry with non-lethal intentions. He did that mostly to keep his hands from busting up more and also because he liked to take something off because investing less meant it was easier to evade. I didn’t think it meaningful that Floyd’s last stoppage came in 2011, and that he went the distance with Miguel Cotto, Robert Guerrero, Canelo, Marcos Maidana twice, Manny Pacquiao, and Andre Berto, before notching a stop against Conor McGregor in 2017.

A smart friend of mine talking off the record on Monday afternoon told me tongue in cheek that I’m part of the problem, because I’m still trying to figure out the “whys” a day later. Maybe so. I should just move on, but not yet, because this is a mystery and until those pesky kids show up to solve it, I will be contemplating.

My pal admitted he didn’t figure out the “why” of the play, either, because he doesn’t see how a distance fight served a purpose for the planners who aren’t Mayweather. Neither did the reporter covering for the New York Times. The headline in the Times story read: “Floyd Mayweather vs. Logan Paul Ends Without a Knockout.”

But my buddy pointed out this: If Floyd REALLY wanted to take out Logan, why didn’t he throw more punches? That’s a question for Floyd to answer. Maybe it was being 44, and not having trained sufficiently. Maybe it was the hardened mindset of punching sporadically, working just hard enough to win rounds, without taking risks by being aggressive. Maybe it was because he wanted the fight to go eight, to scoop up a tasty bag at the bookie office.

And maybe I should move on, because there are “real fights” to cover, and fresher stories to cover. I realized that part of the equation for me, when I found myself getting annoyed by the post-fight talk from Mayweather. The bragging about the wealth shit isn’t even 2020 old, it’s 2015 old. We get it, bro, you made money, and you don’t need to fight, as apparently Manny Pacquiao does. The sport hasn’t moved on as much as it should have following the departure of Floyd from the scene as an active fighter, but I should.

I will, soon. But not just yet. Because Floyd wins again. He always manages to get me wrapped up in the drama, even if I don’t want to. He’s a button pusher, he knows how to get us to talk about him.

It’s his greatest skill, and time hasn’t taken that away.

Vergil Ortiz: I Want To Stay At 147 And Get A Belt Here, We Missed Out On Opportunity At 140
Arum Erupts: Hearn Wanted To Kill Fury-Joshua, I Knew He’d Find a Way To Sabotage It
Jake Paul teasing move to MMA, says he has announcement soon
Hearn: There Is Currently No Reason … That The Eubank-Benn Fight Should Not Take Place
Joe Joyce • FULL POST FIGHT PRESS CONFERENCE vs. Joseph Parker • Frank Warren | BT Sport