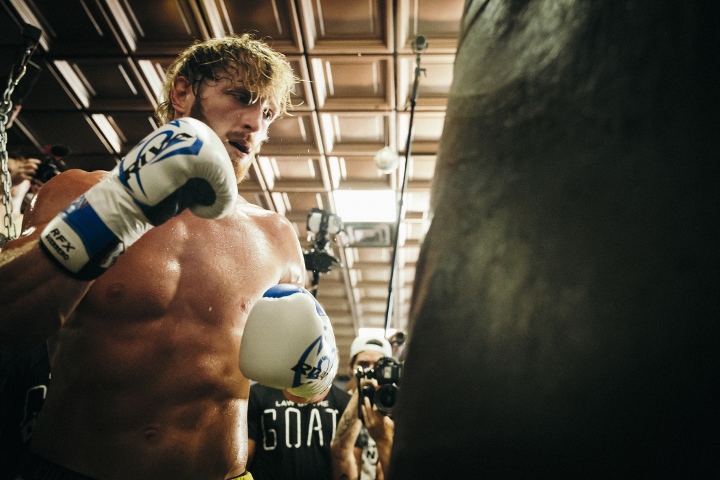 Welterweight Vlad Panin says he was “surprised” by Logan Paul in sparring and does not believe that Floyd Mayweather Jr will knock him out.

Mayweather takes on Paul in an eight-round exhibition at the Hard Rock Stadium on Sunday, with the YouTuber fighting for the first time since losing to fellow social media sensation, KSI in November 2019.

Panin (10-1, 5 KOs) was asked to spar with Paul prior to the official announcement of the event and admits the 26-year-old’s fundamentals took him by surprise.

“I mean he’s got a good jab, he can box from a distance, he’s got control of range, he’s got good natural instincts in terms of his eyes, he’s able to see shots and pull away from them and slip them and stuff like that.

“He throws his jab from different places, I could tell he’s learning like these different veteran tricks and stuff, so I actually think it’s going to be an interesting fight.”

Former pound-for-pound star, Mayweather retired with a record of 50-0 after coming out of retirement to beat UFC star Conor McGregor in 2017.

Mayweather returned for a three-round exhibition against kickboxer Tenshin Nasukawa in 2018, who he stopped inside a round, but Panin, who sparred up to 20 rounds with Paul does not expect ‘Money’ to stop him, with the Florida State Boxing Commission confirming that knockouts are allowed, although no official winner will be read.

“I don’t think Floyd stops him. I think it’ll be pretty interesting, because Logan’s so much bigger,” Panin added.

“Logan makes me look tiny and I’m 6 ft tall and Logan’s like 6”3, definitely over 200lbs. I mean when he hits you, you’re still getting hit by like a technical heavyweight.

“He’s a naturally strong guy, he wrestled in high school, he’s got good athletic ability, he’s got good natural instincts and Floyd is a little bit up in age now, and I know a lot of people are overlooking this, but these are all things that you have to take into account.

“He’s definitely going in there to win, he’s confident. He knows he’s the younger, bigger guy and I’m sure he knows that Floyd is just going to overlook him, he’s just going to say ‘this guy’s a YouTuber, he’s not going to beat me, I’m Floyd.’

“I mean, I’m sure he always stays in good shape. Floyd’s always kind of secretly in the gym and I grew up in Vegas so I’ve been in his camps, I’ve seen him work and he’s got a great work ethic, but I think if he overlooks Logan, it could be interesting to say the least.”

Shakur Stevenson-Robson Conceicao: LIVE RESULTS From Prudential Center
Edwards vs Alvarado set for Nov. 11 in London
Women’s boxing pound-for-pound rankings: Taylor still No. 1, but Shields can shake things up with a win
IBA Board Selects Secretary General, Appoints Strategy Committee
Tyson Fury On Joe Joyce: “He Wouldn’t Land One Punch On Me”