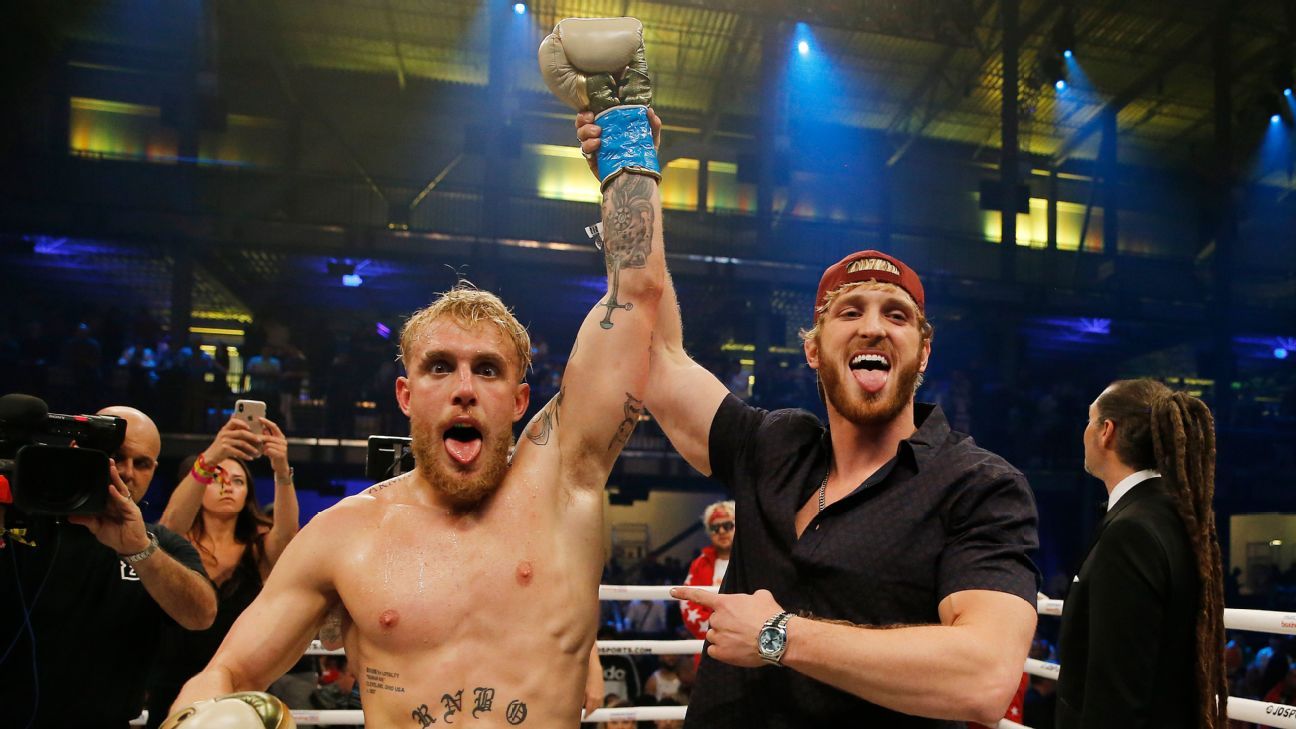 It was their first news conference in Miami in advance of Sunday’s exhibition bout between Mayweather — the retired and undefeated boxer considered by many to be one of the greatest of all time — and Logan Paul, Jake’s older brother and a fellow internet star. What happened next is well-documented. Jake stole Mayweather’s hat, a scuffle ensued, and the interaction went viral and made headlines.

In many ways, Mayweather is returning to the type of spectacle he mastered at the peak of his career. As good as Mayweather was in the ring, he was arguably better at marketing and promoting himself as the sport’s top villain. The Paul brothers have played a similar role on the internet, repeatedly cashing in on the chaos they’ve created.

Many in boxing have tried to mimic the Mayweather promotional playbook, which made him the world’s highest-paid athlete from 2010 to 2019, according to Forbes. And while many boxers have tried to become “the next Mayweather” only to fall short, the ones who have found a similar level of recent promotional success are influencers-turned-combat stars.

Like Mayweather, Logan, 26, and Jake, 24, are comfortable playing the role of the heel. All three thrive on it. And they’re able to turn it into something tangible — dollars.

“They’ve done a tremendous job with emulating Floyd’s marketing genius,” Leonard Ellerbe, Mayweather’s longtime adviser, told ESPN. “They’ve turned that into something that’s been extremely profitable for them. They’ve become major players in the boxing industry because of that.”

At the same time, they’ve all had significant personal and legal problems. Logan received backlash and lost revenue following a video blog from a Japanese “suicide forest” that he later apologized for. Jake was accused of sexual assault earlier this year, and has denied the claims. Just years into Mayweather’s career, his legal issues began, including a 2009 domestic violence conviction that resulted in a 90-day jail sentence.

Somehow, none of it kept him out of the ring.

Mayweather won the bronze medal in the 1996 Olympics after many believed he was robbed of a shot at gold because of bad judging. He bulldozed some of the sport’s top names — Arturo Gatti, Jose Luis Castillo, Diego Corrales, Zab Judah — and became a multidivision champion. Yet, the fighter known as “Pretty Boy” wasn’t a massive pay-per-view star.

Against Judah, Mayweather was hit with two illegal punches that nearly sparked a brawl in the ring, but he shrugged it off and even downplayed the incident afterward.

“That’s what it’s about — conducting yourself like a gentleman,” Mayweather told a group of reporters after the fight. “Because that takes you farther in the corporate world.”

That changed when Mayweather faced Oscar De La Hoya in 2007. During that press tour, Mayweather played the heel and riled up anyone he could. At the tour’s conclusion in Los Angeles, Mayweather brought out a chicken, draped with a mock medal, to represent De La Hoya, a former Olympic gold medalist. He also stole De La Hoya’s bag.

The fight reportedly did 2.5 million pay-per-view buys, nearly seven times his previous PPV fight. A new, polarizing character was born. For the rest of his career, he was known as “Money” Mayweather.

“In order for a pay-per-view to succeed, the main ingredient is emotions,” said Richard Schaefer, the founder of Ringstar Sports, who previously promoted some of Mayweather’s fights. “You need to be able to create emotions in people which triggers them to buy and push that ‘buy’ button.

“When you can create those emotions, you know you have a successful pay-per-view. And nobody has been better, and is better, than Floyd Mayweather by creating these emotions.”

The Paul brothers have created those divisive emotions on the internet for years. They rose to fame in the early 2010s on the now-defunct social media app Vine, which allowed users to upload 6-second clips that looped. They carried that clout over as they transitioned to YouTube, where they now have a combined 43.4 million subscribers. From there it’s Instagram, Tik Tok, you name it — if there’s a social media platform, they’re doing their best to figure out how to own it and monetize their efforts. Despite their lack of experience and previous exposure, they’re doing the same in boxing.

Just like Mayweather, who always aligned himself with Showtime and HBO, the Pauls have maximized their impact in the sport by finding the right distribution partners. The first two fights for Logan — one exhibition and one professional — were promoted by Eddie Hearn’s Matchroom Boxing, which is one of, if not the, biggest boxing promotional companies in the sport. Hearn’s desire to find new eyes for the sport was one of the driving forces in that endeavor, but for Logan it was the perfect outlet for his brand.

Jake worked with Triller for his past two bouts, knocking out former NBA All-Star Nate Robinson on the undercard of Mike Tyson’s fight with Roy Jones Jr. He then headlined the next Triller event and knocked out Ben Askren in just two minutes. Last week he signed a deal with Showtime and will face former UFC welterweight champion Tyron Woodley this August.

“I want to keep fighting and I have a list of targets of people that keep talking s—, Antonio Brown, Dillon Danis, other YouTubers — the potential for this is massive and I know that I will be the best ‘influencer-boxer,'” Paul told Matchroom Boxing ahead of his professional debut in January 2020. “This is new, it is an untapped vertical for me. I look at myself as an innovator and a pioneer.”

Mayweather’s playbook always included strategic matchmaking. No matter the argument over who was at fault for the delay, Mayweather didn’t fight Manny Pacquiao until six years after the latter became a fellow welterweight champion. He added Canelo Alvarez to his list of victories while Alvarez was early in his career and well below his current fighting weight of 168 pounds. Mayweather’s final boxing victory to give him a perfect 50-0 record came against UFC superstar Conor McGregor, who had never boxed professionally prior to his 2017 TKO loss to Mayweather.

“Since he took charge of his career, he has intuitively understood what his fans want and what his detractors want to root against, and he’s happy to provide both,” Showtime Sports president Stephen Espinoza said about Mayweather. “I think that can be said just as effectively about Logan Paul and Jake Paul.”

The Miami news conference to promote Sunday’s exhibition showed those similarities. Each man used the other’s legal problems as verbal barbs to lob at each other on stage. Even Jake’s hat theft, which ended with all parties being restrained, was good for business. The incident’s coverage dominated the ensuing news cycle.

“I have to say, it was f—ing brilliant what he did with stealing his hat,” Schaefer said. “This guy knows exactly what buttons to push in what he’s doing. The guy is absolutely brilliant.”

Floyd Mayweather and Logan Paul face off ahead of Sunday’s fight at Hard Rock Stadium.

In Showtime’s fight-preview special “Inside Mayweather vs. Paul,” Logan Paul and Mayweather are both seen reviewing the footage as it went viral.

“Shoutout to my brother for selling the fight for me,” Logan said into the camera.

Sunday’s exhibition could be as lopsided as Mayweather’s 2017 bout against McGregor. Maybe even more so. Mayweather-McGregor reportedly sold 4.3 million PPVs, and it jump-started the trend of nontraditional matchmaking that has proved to be lucrative for both Mayweather and the Paul brothers.

If Mayweather comes out of the exhibition unscathed, it could open the door for a future bout against Jake Paul. Given the marketability of both men and the trajectory of their latest endeavors, it’s possible that a Jake Paul-Mayweather event could be one of the highest-selling pay-per-views in the history of combat sports.

And how did we get here? A hat snatched, a bag stolen, poultry-based mocking. All schemes out of the Mayweather playbook that prove the Paul brothers have found the keys to cashing in.

“The possibilities, really, are endless,” Espinoza said. “As long as they are continuing to evolve with the sport and train and commit to it, there’s literally no end to the challenges they can undertake. And I think that’s what’s going to keep it interesting.”

Hearn Says Eubank-Benn Catchweight Is ‘Bigger Disadvantage To Conor Benn’
Joe Joyce Confident His Pressure Would Get To Oleksandr Usyk
Plant: Dirrell Couldn’t Even Hold His Title Long Enough For Us To Have A Unification Match
Ali Izmailov-Radivoje Kalajdzic To Headline ‘ShoBox’ Tripleheader 10/21 In Atlantic City
Richardson Hitchins signs multi-fight deal with Matchroom