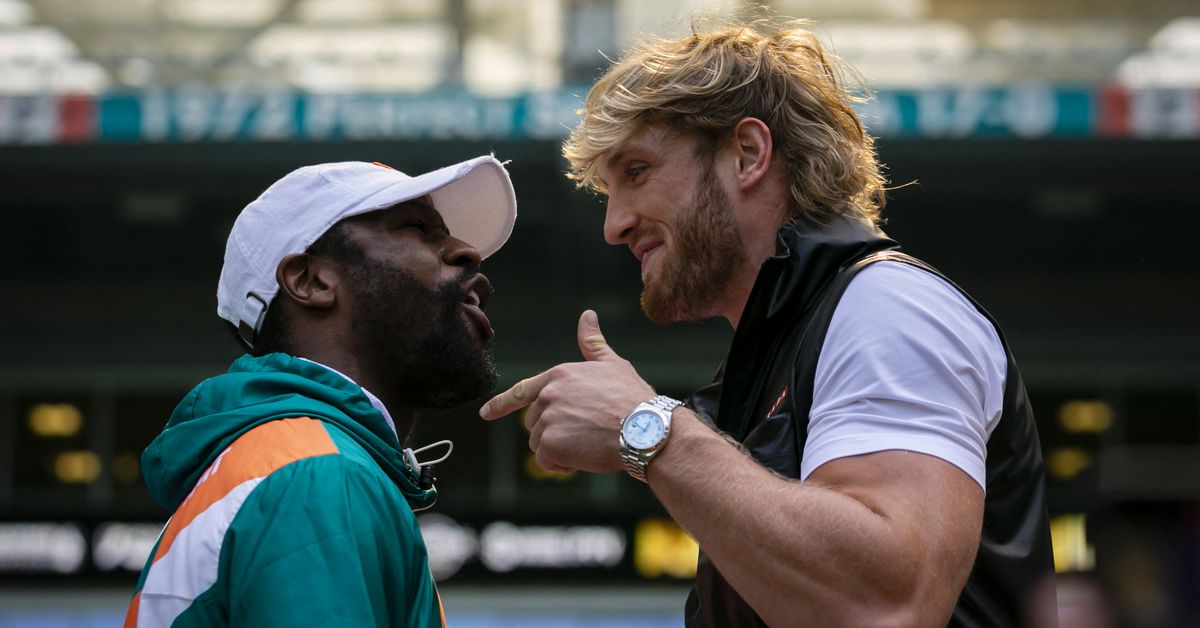 YouTube and Facebook, 1:00 pm ET, Floyd Mayweather vs Logan Paul press conference. Actually, I think this is not a traditional sort of press conference but it’s some sort of media function similar to one, probably serving about the same purpose, and at any rate it will stream live for everyone from the former Versace Mansion. That’s how I know this is good, it’s at a rich people place. That makes me think, “Wow, yes.” BLH will have live coverage.

YouTube and Facebook, 11:00 am ET, Mayweather-Paul undercard press conference. What wild things might Chad Johnson the football man say? Will Brian Maxwell pretend he’s in a real fight? Will Luis Arias promise a barnburner and then two days later fight like Luis Arias? These questions and more will be answered.

YouTube and Facebook, 6:30 pm ET, Floyd Mayweather vs Logan Paul weigh-in. This is a weigh-in for the main event only, as the fights are happening Sunday so doing it two days out is really not traditional, but this isn’t a real fight so it doesn’t really matter what they weigh. They’ll probably tell you Logan Paul weighs his advertised limit of 190 or 189½ or whatever and he’ll flex and shout and make a face, but he surely won’t actually have to meet that in reality. Mayweather will weigh whatever he weighs, they might lie about that, too. It’s fun to lie to people if you can get away with it, real adrenaline rush. I get the appeal of doing it even though they didn’t have to lie, really. BLH will have live coverage.

BT Sport (UK), 3:30 pm ET, Daniel Dubois vs Bogdan Dinu. It’s utterly ridiculous, but Dubois-Dinu is for the interim WBA heavyweight title. Dinu is a pro and honestly the sort of guy Dubois should be fighting right now, particularly as Dubois is coming off of a loss. Dinu is credible enough to be here, but if Dubois has collected himself he should win. It’s not bad matchmaking for where Dubois is in his career, but the WBA is really hitting some new lows with their heavyweight mess. ESPN+ do not have this on the schedule so it doesn’t look like it’ll have legal U.S. availability, so we probably won’t have coverage. If ESPN+ do pick it up — they’d been consistent with Dubois, but he did just lose a fight — then we will have coverage.

YouTube and Facebook, 12:00 pm ET, Mayweather vs Paul undercard weigh-in. This one is for the two real fights (Badou Jack and Hurd-Arias) and the Chad Johnson exhibition. BLH will have live coverage.

PPV, 8:00 pm ET, Floyd Mayweather vs Logan Paul, Badou Jack vs TBA, Jarrett Hurd vs Luis Arias, Chad Johnson vs Brian Maxwell. Again, to be very, very clear: Mayweather-Paul is an exhibition. It is entertainment. What I am telling you is that it will be roughly as real as WWE. I only repeat this because a lot of people really struggle with the concept. Between boxing exhibitions and reality TV, I think we’ve proven that if pro wrestling came around right now as a totally new idea instead of having been a thing for a century, you probably could convince a good amount of people they’re really fighting. I’m not “hating,” by the way, I don’t care, if you can make money and get people excited for something, by all means do it. But people should know what they’re putting down $50 on, too.

We were supposed to have Pascal-Jack 2, but that’s off with Jean Pascal failing a drug test pretty spectacularly. Jack is still scheduled to fight someone, probably nobody particularly interesting, but in a real, actual fight. Hurd-Arias is a real fight at middleweight. Chad Johnson vs Brian Maxwell is also an exhibition, with the former NFL star Johnson doing a one-and-done to scratch something off his life’s list. Whatever the show winds up being, we’ll be here. BLH will have live coverage.