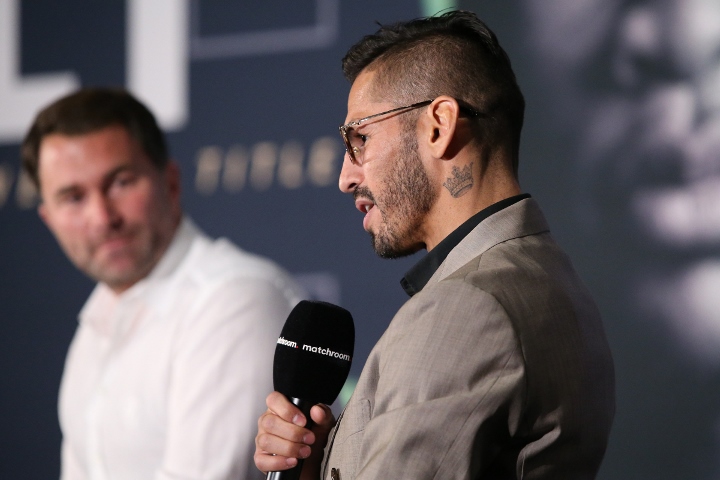 Jorge Linares is a betting underdog in his title bid versus Devin Haney this weekend, though he likes his odds given the history with his opponent’s promoter.

This weekend’s WBC lightweight title fight marks the fifth time in his career where Linares faces a fighter promoted by Eddie Hearn. The former three-division titlist, now 35, has yet to lose in such scenarios and is eager to continue that streak.

“Eddie Hearn is not my promoter but he has always been very good to me,” Linares told BoxingScene.com, holding up four fingers to represent his perfect 4-0 record against boxers under the Matchroom Boxing banner. “I look forward to once again beating one of his fighters.”

Haney (25-0, 15KOs) attempts the third defense of a reign dating back to 2019. The WBC title he holds was once in the possession of Venezuela’s Linares (47-5, 29KOs) for 14 months before boxing politics managed to get in the way of his reign. The reign included a May 2015 win over Kevin Mitchell, Linares’ first victory over a Hearn-promoted fighter. The May feat required his having to survive a 5th round knockdown and trailing on two scorecards to drop and stop the Brit in the 10th round of their thriller.

Linares moved on from being stripped of the WBC title to collect the WBA strap, beating Hearn-promoted Anthony Crolla to win the strap in Sept. 2016 and which he retained in their March 2017 rematch. Linares kept it in the Matchroom family for his second successful title defense, edging England’s Luke Campbell in their Sept. 2017 title fight at The Forum in Inglewood, California.

The reign ended two fights later with a 10th round stoppage loss to Vasiliy Lomachenko in May 2018, having won three of his four bouts since that night. The upcoming clash with Haney marks his first title challenge since that night, though 15 months after his last ring appearance which came in a 4th round knockout of Carlos Morales last Valentine’s Day in Anaheim, California.

Plans were in place for Linares to face Javier Fortuna last August, with the winner to then challenge for Haney’s title. That fight was scrapped when Linares tested positive for COVID-19, though with an upgrade for his ring return.

“I’m very grateful to Golden Boy and (co-promoter Teiken Promotions) for getting me in this position and to work with Eddie Hearn to make this fight possible,” notes Linares. “I know this will be a difficult fight, I look forward to a very clean fight with Devin Haney.

“I also look forward to winning back my old title and continuing my streak (of beating Matchroom fighters).”

Eubank: We’ve Never Seen Conor Benn Get Hurt; Will He Be Able To Come Through That?
Adrien Broner Calls Out Nate Diaz to Crossover Fight
Eubank: I Can’t Not Underestimate Benn; Hasn’t Been In With Any Dangerous Fighters
Where It All Began: Covering Benn vs. Eubank II in ’93
In less than three weeks the Nordic Nightmare Robert Helenius sets sail for Brooklyn to fight Wilder