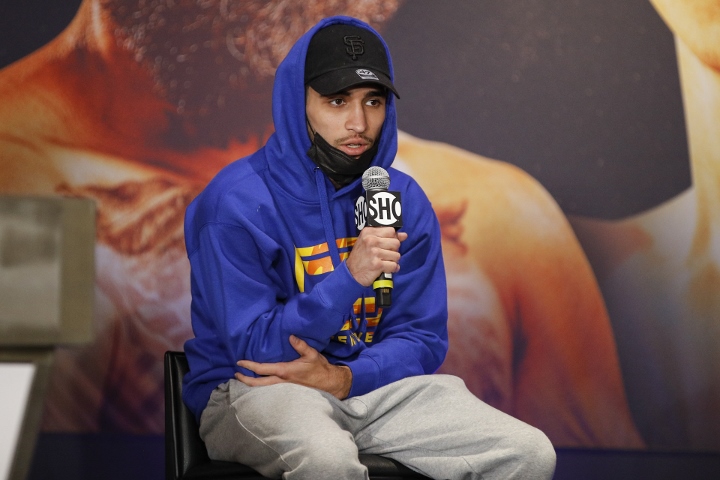 Xavier Martinez entered 2021 hoping his first fight out the gate would be for at least an interim title.

After having survived his first test of the year, that goal remains intact.

“I feel like the next fight for me is Chris Colbert,” Martinez told BoxingScene.com of a possible showdown with the interim WBA junior lightweight titlist. “We’ve already exchanged words. I feel like it will be a great fight for both of us.”

Martinez (17-0, 11KOs) landed in a great fight of his own, outlasting Tijuana’s Juan Carlos Burgos in a 10-round firefight. The wide scorecards—99-91 across the board—in favor of the unbeaten Sacramento native weren’t quite indicative of the action that took place in the ring, though with the right guy winning in the end.

It was the second straight win over a veteran contender, as Martinez recovered from two knockdowns to beat former secondary featherweight titlist Claudio Marrero in their 12-round title eliminator last October. The win and its stakes led Martinez to believe a showdown with Brooklyn’s Colbert (15-0, 6KOs) would be next. The two have already exchanged plenty of words, through social media and various mediums. The two-way intention is for both to eventually exchange punches in the ring.

“He is most definitely on that path,” Leonard Ellerbe, CEO of Mayweather Promotions told BoxingScene.com of Martinez being groomed for a title fight. “I’d love a fight with Chris Colbert. Hopefully it’s a fight we can make in the very near future. Those two do not care for each other. We’ve seen the back and forth on social media.

Colbert is next due to face Yuriorkis Gamboa (30-4, 18KOs) on July 3 from a location to be determined. By that point, Martinez will have celebrated fatherhood for the first time—with his girlfriend, Jessica due with their first child by mid-June—and have even more motivation to realize the goals he has set out for himself in the months ahead.

“We can’t be worried about taking an L,” Martinez said of his desire to take risks. The greats used to fight the greats. They would get losses all the time. We can’t be afraid. I like being the underdog in that fight, too. I will be the underdog. I will be doubted. That will drive me enough, those two things. It’s just words between me and Chris Colbert. I don’t worry about the drama. I just want my next fight to be for the title.”

The Chances For A December Fury-Joshua Fight Are Now Very Slim – And That’s Too Bad
Broner vs Santiago FULL FIGHT: February 21, 2021 | PBC on Showtime
Deontay Wilder: I Hold Oleksandr Usyk To Be a Man of His Word
Usyk’s Manager Says Deontay Wilder is Real Option For Next Fight
PODCAST: Is Eubank vs Benn any good? Plus Fury-Joshua, Spence-Crawford, more