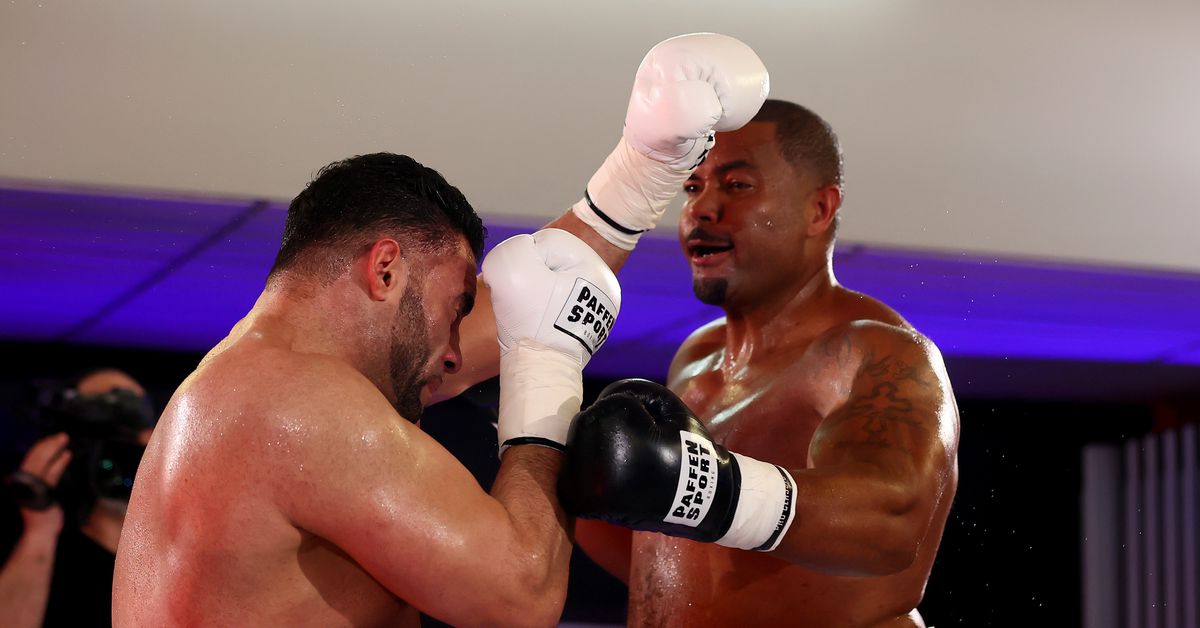 As of Tuesday afternoon, the WBA’s rankings listed four names laying claim to a WBA heavyweight title or status.

Anthony Joshua is their “super” champion, Trevor Bryan the “world champion,” Robert Helenius is the “gold” champion, and Mahmoud Charr is termed “champion in recess.”

There is nobody holding the “interim WBA world heavyweight championship,” and yes, you’d be within your rights to ask why there would be a need for an “interim” titlist, being that Bryan, the so-called world champ, just fought and secured that belt on Jan. 30.

Fear not, though, if you are in the camp who thinks that interim belt situation should get sorted, because on June 5, Daniel Dubois is slated to fight Bogdan Dinu, and the interim WBA strap will be on the line.

Dinu is training in his hometown of Buzau, Romania, and he’s been sparring a big-name talent, according to a press release sent out by Greg Cohen Promotions. In the release, Cohen is named as promoter of Dinu (20-2, 16 KO).

No discredit intended to the warriors, who are pawns within a strange scene, but the reasoning to have this faceoff labeled a “title fight” would be strained at best, ludicrous at worst. The WBA has the 34-year-old Dinu ranked No. 2 behind Oleksandr Usyk, while Dubois, 23, is ranked No. 5.

Dinu, the release shares, is sparring Jarrell “Big Baby” Miller, who scored a KO win over Dinu in 2018. Dinu also got stopped in his next outing against Kubrat Pulev in 2019. He rebounded with stoppage wins over resume padders Osborn Machimana and Frank Bluemle.

Dubois was last seen battling Joe Joyce in Nov. 2020; he took his first L when his eye closed up and he couldn’t continue in round 10.

“I see a young heavyweight who likes to fight, but has only faced easier opponents,” Dinu said about Dubois. “His only tough fight was against Joe Joyce and we saw what happened. You’ll see by the result of our fight that his big reputation is exaggerated. He’s promising to knock me out? He’s just saying words because he hasn’t met me yet. He will have a big surprise when he looks in my eyes, just as tall as he is and not afraid of him at all. I am going to be very well-prepared and I have a lot of surprises for this kid.”

“Bogdan Dinu has only lost to two of the top contenders in the division in Miller and Kubrat Pulev and he really should have won the Pulev fight,” said promoter Cohen, who is back to boxing after a state sponsored hiatus. “Bogdan is a very smart, experienced, tough guy with a great amateur pedigree and I don’t think Daniel Dubois is ready for someone with his world-class skills and experience. Dinu is working every day in camp with Jarrell, who is pushing him to his limits and taking him to new levels as a fighter. After June 5, Bogdan Dinu will be the interim WBA heavyweight champion in line to face one of the top dogs.”

It comes as no surprise that the WBA’s heavyweight landscape has clown-show elements to it. You recall the goofiness during fight week when Don King put on a PPV topped by Trevor Bryan vs Bermane Stiverne in January. That main event was allegedly supposed to have been Trevor Bryan against Mahmoud Charr.

Only Charr, based in Germany, never arrived in Florida. There was beef between King and Team Charr, and scurrilous barbs flew back-and-forth between the parties. The Charr side said they were ready to rumble, but that King wasn’t serious about inviting Charr to any party involving Bryan.

Charr did fight this past Saturday for the first time since 2017, beating Christopher Lovejoy in Cologne, Germany, via second round knockout. Charr received mild competition from Lovejoy, who received threatening word from King that he was still under contract, and should not go through with the plan to face Charr.

Lovejoy told me he severed ties with King, that his lawyers had overseen the parting of ways with the Hall of Fame promoter.

“The contract expired May 4,” the fighter explained. “I didn’t want to go to court for Don trying to extend (our deal) for any type of COVID excuse.”

King’s company said otherwise in a release put out by his office the day before the scheduled Charr-Lovejoy fight.

For the record, Lovejoy said he was feeling good heading into that fight, but a couple days after we messaged, he weighed 306 pounds on the scales, 70 pounds heavier than his previous fight. Lovejoy didn’t answer queries from me after, but defended himself vigorously on social media after getting kayoed by Charr in Cologne.

All this is to say the WBA drapes itself in the opposite of glory with all of this. Even within the fast and loose atmosphere of the loosely structured and overseen sport these shenanigans stand out, for their audacious perniciousness.

Usyk on Joshua Outburst: ‘He Reminded Me of a Little Boy’
Richardson Hitchins Inks Promotional Pact With Eddie Hearn
Jake Paul teasing move to MMA, says he has announcement soon
Eduardo “Rocky” Hernandez Hopes To Close Out 2022 With a Big Fight
Editor’s Letter: While Fury and Joshua tease a mega fight, chaos reigns in the amateur game